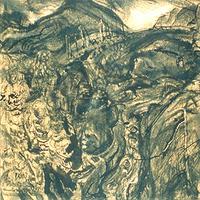 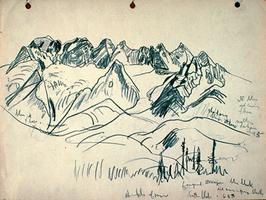 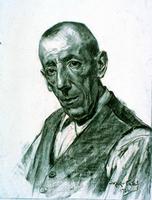 Drawing may be an autonomous art form or a preparatory step in establishing the design of another work of art. Though drawing is defined by its linear quality and has nothing to do with the medium used, the principal drawing media are ink, pastel, charcoal, metal point, graphite pencil, conté crayon and chalk. The history of drawing in Canada is marked by blank areas, periods when artists produced few drawings or when "working drawings" were regarded as mere notations for compositions in other art forms. Not until late in the 19th century were collectors or exhibition bodies interested in drawings as finished works of art. By the 20th century the situation had changed and drawings were more appreciated by the public.

Drawings that belong to the period of early exploration, to Cartography and to developments in New France were carried out by Europeans exclusively and were closely tied to European stylistic traditions: fact, fantasy and contrivance are not easy to distinguish in such drawings (see also Painting). Changes in approach are visible by the 18th century, when precision became important, as, for example, in the noble drawings of buildings in Québec City by Charles Bécart de Granville and the panoramic view of Louisbourg (1731) by Étienne Verrier.

In contrast to the French colonial period, when engineering drawings and draughtsmen's plans for Fortifications and buildings were produced, the English colonial period generated a wealth of pen and ink or watercolour views, by travellers, military men and their dependants, which record exploration, military and naval campaigns, immigration and settlement. During the Seven Years' War, several British officers made sketches of the siege of Québec City (1759) and the ruins after the battle; Wolfe's aide-de-camp, Hervey Smyth, showed troops scaling the cliffs to the Plains of Abraham and naval vessels operating in the St Lawrence. Many historic Québec buildings are known only through the detailed drawings executed by Richard Short. In the peace that followed, officers trained at the Woolwich Military Academy in England made accurate drawings of fortifications and the scenic landscape, many of which were later engraved and reproduced in popular travel books (see Topographic Painters).

In their westward travels after 1845, Paul Kane and William Hind made hundreds of on-the-spot pencil, ink and watercolour sketches - portraits, landscapes, and artifact and figure studies. Art in Québec in the same period was mainly religious painting and sculpture, but some preparatory drawings of church murals by artists such as François Baillairge have survived. The other mainstay of Québec art was portraiture, and many lovely drawings by the leading artists (Antoine Plamondon, François Beaucourt and Louis Dulongpré) were made for those people who could not afford oil portraits.

As well-trained artists immigrated to Canada and native-born artists increasingly spent a period in study abroad, Canadian art became exposed to influences from France, Holland, Germany and the US. The artists' societies of the period, particularly the Royal Canadian Academy of Arts (founded 1880), did little to encourage drawing as an art form, which probably explains the dearth of finished drawings in the last 2 decades of the century (see Artists' Organizations).

Drawings tended to be regarded by many artists solely as preparation for paintings, and thus good drawings often remained hidden in sketchbooks. Yet these preliminary sketches often possess a spontaneity absent in the worked-over exhibition pieces of the academicians. The sketchbooks of Robert Harris and William Raphael, for example, contain vivid studies of figures later incorporated in well-known paintings, while Lucius O'Brien, John A. Fraser and T. Mower Martin made quick and sometimes detailed drawings of the Rockies and the West during the CPR-sponsored excursions in the 1880s and 1890s.

Homer Watson, Horatio Walker and Marc-Aurèle de Foy Suzor-Cote made lush and beautiful drawings in chalk, graphite and charcoal of peasants in the rural landscape, the subject of their often prolific and popular paintings. While the drawings of James Wilson Morrice, Maurice Cullen and Clarence Gagnon show some of the elusive touch of French impressionism, these artists were interested primarily in colour and light and their few surviving sketches are essentially notations for future paintings. Morrice, however, was a brilliant draughtsman and, in his hundreds of tiny oil sketches, the under drawing is often visible beneath a thin surface of paint. Ozias Leduc was perhaps the most prolific draughtsman, creating detailed pencil or charcoal drawings of compositions and figures, some of which were intended for church murals and paintings; his study for L'Enfant au pain (1892-99) is remarkably close to the finished painting in the National Gallery.

The Canadian artists who studied in London, Paris or Philadelphia in the late 19th century - William Brymner, George Reid, Paul Peel, Sidney Strickland Tully - were well trained in "correct" drawing, first from plaster casts, then in life classes (see Art Education). They perpetuated the practice of preliminary sketches for paintings; however, a drawing, such as Reid's Hattie (1880), was obviously intended as a finished work.

At the end of the 19th century the bulk of Canadian drawing was done for the utilitarian purpose of periodical illustration. The Toronto Art Students' League (1886-1904), a society of artists dedicated to the art of drawing, took as its motto "Nulla Dies Sine Linea" ("No day without a drawing"). The members, some of whom were former students at the Ontario School of Art (now Ontario College Of Art And Design), worked in print shops and engraving firms and included Charles MacDonald Manly, Robert Holmes, Frederick Henry Brigden, William Cruikshank and Charles William Jefferys. This group of artists met for study and sketching trips and published a calendar illustrated with pen-and-ink drawings between 1892 and 1904; Jefferys, fascinated with historical themes, produced The Picture Gallery of Canadian History.

Another well-known illustrator was Henri Julien, who contributed vigorous figure drawings and caricatures to journals in Montréal and abroad. Some prominent painters also supplemented their income by illustration, as when Lucius O'Brien, Henry Sandham and John Fraser contributed drawings to Picturesque Canada (1882).

Although members of the Group of Seven made rapid and skilful sketches in pencil, ink or oil wherever they travelled across Canada, most of their drawings were working plans for paintings, never intended to be displayed in public. The sketchbooks that survive, however, are a creative shorthand to their more famous paintings - notations that isolate the images most characteristic of the landscape they wished to portray. A.Y. Jackson, Arthur Lismer and F.H. Varley were the most able and prolific in the medium, though Varley surpassed the others in talent, sensibility and range. His drawings, whether landscapes, portraits of women, or sketches done on site during his period as an official war artist, show brilliant skill. Lismer, a superb and quick draughtsman and caricaturist, created a large gallery of irreverent portraits of his friends.

The drawings of Lawren Harris, never an end in themselves, reflect his progression from streetscape to landscape to abstraction, and are often linked to his philosophy of art. Lionel LeMoine Fitzgerald was only briefly a member of the Group, but drawing was ideally suited to his subtle art. Whether his subject was still life, nudes or the landscape, he was concerned to set form against form, edge against edge, fine line against stippled areas, in an orchestrated, delicate design in space; he produced a large body of ephemeral drawings, often in coloured pencil or chalk.

While David Milne produced little that can be called drawing in the strictest sense, his watercolours and drypoint etchings reveal his command over basic drawing techniques. His paintings are such triumphs of economy and linear strength that they might be seen as drawings in oil. His contemporary, Emily Carr, produced a large number of charcoal and oil drawings on paper that were often done on the spot. These drawings reveal her powerful expressionist vision of the forest and her basic respect for native life. In their rapid, broad, economic yet almost calligraphic strokes and scumbles, they capture the essence of her understanding of West Coast living and her awe before a totem pole.

Goodridge Roberts occupies a secure position among Canadian landscape painters, but his restrained and sometimes sombre brush drawings are reminiscent of Chinese ink drawings in their balance and subtlety. John Lyman, in works such as Dancing Nude, took a new approach to drawing, based on ideas put forward by the French artist Matisse, in which the vitality of the line took precedence over the depiction of the model.

In the next decade, the Automatistes brought spontaneous, unpremeditated, nonobjective art to Québec. As their leader, Paul-Émile Borduas went on to produce a series of powerful abstract drawings that forecast the major developments in his brilliant progress in abstract art. Alfred Pellan, who returned to Montréal in 1940 from Paris, set up a rival movement. His drawings and paintings are imbued with surrealist imagery.

In 1953 a group of nonobjective painters in Toronto, inspired more by abstract expressionism in New York than their contemporaries in Montréal, formed Painters Eleven as a means of exhibiting their work. Oscar Cahen made many drawings incorporating abstract expressionist and surrealist elements, but the most talented and prolific figurative draughtsman was Harold Town, who created a thoroughly independent series of drawings.

After the 1960s the number of artists working in drawing expanded considerably. Their variety of styles usually reflect their work in other media. Alex Colville, Christopher Pratt and Jack Chambers are known as "realists" whose drawings show a high degree of technical skill, if not vitality and spontaneity. Ernest Lindner produced microscopically detailed drawings of trees in decay as potent metaphors of death and renewal. There are drawings by Christiane Pflug, imbued with haunting, sombre imagery; vibrant, mixed-media abstracts by Gordon Rayner; subtle, textural abstracts by Betty Goodwin; figure studies by Robert Markle and Graham Coughtry; harsh, monumental drawings by John Scott; domestic interiors by Mary Pratt; and landscape sketches by Ann Kipling, Dorothy Knowles, Takao Tanabe and Gordon A. Smith.

Drawing is a 2-dimensional form of art, even if done on modern devices such as the computer screen. Drawing will continue to change in style, technique and media, but its content will capture the more personal, often private, reactions of artists to the world around them, not unlike a tenuous melody that awaits orchestration.