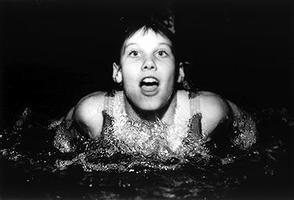 In 1966 Tanner set world records in the 220-yard individual medley and 220-yard butterfly and, at the Commonwealth Games, won four gold and three silver medals (photo by Bill Cunningham).\r\n

Elaine Tanner, "Mighty Mouse," swimmer (b at Vancouver 22 Feb 1951). Tanner's career in international competition was brief but outstanding. She is considered Canada's best female swimmer, winning the country's first-ever Olympic gold medal in swimming and becoming the first Canadian woman to win 3 medals in a single Olympics. Her specialties were the backstroke, butterfly and individual medley; she also swam on winning freestyle relay teams. In 1966 she set world records in the 220-yard individual medley and 220-yard butterfly and, at the Commonwealth Games, won 4 gold and 3 silver medals - the most successful woman swimmer at those Games. She received the Lou Marsh Trophy as Canada's outstanding athlete that year at age 15 - the youngest ever to receive the award. She won 2 gold and 2 silver medals at the 1967 Pan-American Games, and 2 silver and 1 bronze at the 1968 Mexico City Olympics, the first woman in Canada's history to win an Olympic medal in swimming and the first Canadian athlete, male or female, to win three medals in a single Olympics games. In 1970 she received the Order of Canada and in 1971 she was inducted into Canada's Sports Hall of Fame.