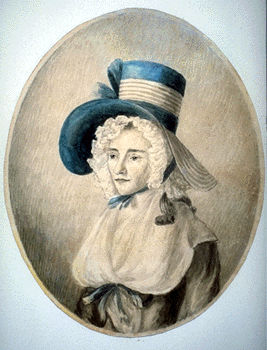 Elizabeth was the only daughter of Lieutenant Colonel Thomas Gwillim and Elizabeth Spinkes. Thomas Gwillim died seven months prior to the birth of his daughter, and Elizabeth Spinkes died hours after giving birth. The date of Elizabeth Gwillim’s birth is not known; however, her record of baptism at All Saints Church, Aldwincle, England, is 22 September 1762. Her mother’s burial at the same church was the day after. John Ross Robertson, the original compiler of Elizabeth's diary, states in the diary that Elizabeth was born at Whitchurch, Northamptonshire, England, in 1766 – however, the actual details of her birth are unknown.

Elizabeth was raised by her grandmother and later, by her mother's younger sister, Margaret, receiving an education in languages, drawing and music. In 1769, Margaret married Admiral Samuel Graves. Elizabeth remained a ward of the Graves, living near Honiton in Devon. In 1782, she was introduced to Simcoe’s godson, British army officer John Graves Simcoe. They were married on 30 December that year.

Elizabeth had an extensive inheritance from both her mother and father. This enabled her to purchase the Wolford estate of approximately 5,000 acres near Honiton in 1784.

In 1791, John Simcoe was appointed lieutenant-governor of the British North American colony of Upper Canada. By this time the Simcoes had six children. Their four eldest daughters, Eliza, Charlotte, Henrietta and Caroline, did not accompany their parents to Upper Canada, but remained behind at Wolford in the care of friends. The Simcoes brought their two youngest children with them, Sophia aged two, and their first son, Francis, who was only three months old.

It was for Francis that the Simcoes later purchased a tract of land east of York (now Toronto), which they named Castle Frank in his honour.

After their posting in Canada, the Simcoes had five more children, including Katherine, in 1793, who died the following year. Another daughter, born in 1801, was also named Katherine.

The Simcoes arrived in Québec City in November 1791 before proceeding the following spring to what was then the capital of Upper Canada, Newark (now Niagara-on-the-Lake). Simcoe’s passion was illustration, and her sketches and watercolours chronicled her travels. Preserved are drawings of Anticosti Island, the grand buildings of Québec City, Gananoque and Kingston. She also had a favourite location where she sketched the falls of Niagara.

Simcoe made several trips through Upper Canada, leaving a visual record in the form of her drawings. These include the Grand River, Burlington Heights, Long Point, and a second trip to Lower Canada.

Elizabeth Simcoe also left an indelible stamp on the recorded history of Upper Canada in the form of her diary. The Diary of Mrs. John Graves Simcoe; Wife of the First Lieutenant-Governor of the Province of Upper Canada 1792–6 was first published by John Ross Robertson in 1911 and has been republished well into the current century.

The diary begins on 17 September 1791, nine days prior to the Simcoe's departure for North America. It finishes on 16 October 1796, three days she and her husband arrived back in England. It is a record of her daily life in the Canadas, providing commentary on the social and civil life of the new province. The diary originally took the form of letters mailed weekly to a Mrs. Hunt in England, the same friend who was then watching over the Simcoe’s four eldest daughters.

The diary existed in three versions. The first is the letters, containing brief descriptions of Simcoe's daily life. These were then expanded, adding more detail and improved penmanship. Finally, the drawings evolved from rough sketches drawn on location to finished works that were sent home and included in the diary. After her return to England, Simcoe made further watercolour copies of her artwork.

The Simcoe family left Canada in 1796. Although Simcoe maintained correspondence with friends in Canada, she never returned. Elizabeth Simcoe died near Honiton on 17 January 1850 at the age of 87.

In addition to her diary, she left more than 500 watercolour paintings depicting the Canadas in the late 18th century. North of Toronto, the townships of North, East and West Gwillimbury bear her family name. The township of Whitchurch, today the town of Whitchurch-Stouffville, was named in honour of her supposed place of birth.

In June 2008, a statue of Elizabeth Simcoe was unveiled in a parkette in the town of Bradford West Gwillimbury, Ontario. 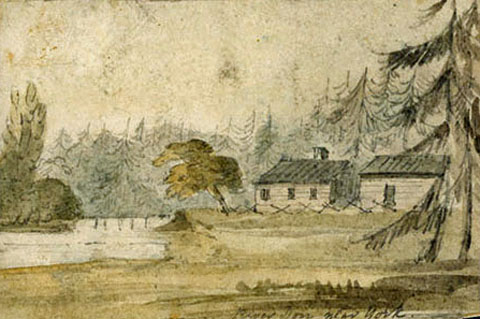 A 1796 painting of Castle Frank, in York (Toronto), by Elizabeth Simcoe.
PreviousNext
×