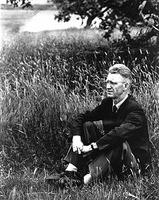 Ernest Buckler, novelist (b at Dalhousie West, NS 19 July 1908; d at Bridgetown, NS 4 Mar l984). Buckler showed a remarkable sensitivity to the landscape and human character of his native Annapolis Valley. One of his principal strengths was his lyrical and metaphorical prose style. After studying at Dalhousie and University of Toronto, Buckler worked for 5 years as an actuarial mathematician in Toronto before ill health prompted him to return to NS.

He began his writing career by contributing short stories and essays to Esquire and Saturday Night. His major achievement, however, The Mountain and the Valley (1952), is a novel about a gifted, ambitious boy who remains so deeply attached to life in rural NS that his creativity becomes stifled. The Cruelest Month (1963) explores the unhappy passions of a group of intellectuals.

Buckler returned to his youthful community life in Ox Bells and Fireflies (1968), a "fictional memoir" (Buckler's term). Nova Scotia: Window on the Sea (1973) again uses elements of fiction and lyrical description, this time to accompany Hans Weber's photographs. The Rebellion of Young David and Other Stories (1975) is a collection of 1940s and 1950s stories. Whirligig (1977), a volume of light verse and prose, won the Leacock Award for Humour (1978).