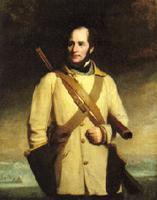 McClure accomplished what Franklin had died attempting. He connected Parry's voyage of penetration from the east with Franklin's coastal survey from the west (courtesy National Portrait Gallery). 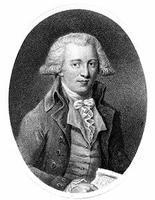 Although innocent of literary ambition, the accounts of primary geographical EXPLORATION in Canada are not without literary interest, for they constitute the foundation upon which much of our imaginative literature is built.

These documents record the first European images of the Canadian landscape and articulate the experience of entering into it. The significance of this writing extends beyond a Canadian context as well, for the narrators deal with the same universal themes of quest, journey and initiation as are found in the works of Homer and Melville.

The importance of exploration writing to modern poetry and prose has gained recognition since the 1960s. The narratives of Alexander MACKENZIE and David THOMPSON have been edited by scholars with literary backgrounds, and Canadian anthologies have begun to include excerpts from the writings of Jacques CARTIER, Alexander HENRY, Samuel HEARNE and others. The notion that the origins of Canadian literature lie almost wholly in the creative efforts of a handful of 19th-century immigrants is beginning to make way for other views.

The initial survey of the land occurred on 3 fronts: overland from Montréal and Hudson Bay, largely motivated by the FUR TRADE's search for profits; through the arctic islands, spurred by the quest for a NORTHWEST PASSAGE; and up the Pacific coast, where British, Spanish, American and Russian mariners rapidly reduced the sea otter population. The fur industry produced many accounts of interest only to the geographer or historian; yet curiously this profit-oriented enterprise also spawned writing of considerably greater literary significance than did the somewhat less materialistic search for the Northwest Passage.

Observing with the Explorer's Own Eyes

One reason for this may be that the fur trade tolerated personal idiosyncrasies so long as they did not hinder profits. Several fur-trade narratives - particularly Hearne's Journey from Prince of Wales's Fort in Hudson's Bay to the Northern Ocean (1795) and Thompson's unfinished Travels - rise to the level of literature through their success in conveying the author's personality and palpable narrative presence. Hearne's horror at his own powerlessness as he watches his Indian companions slaughter a camp of Inuit, for example, becomes our horror, not by virtue of the event itself, but through the emotional intensity of observing with the explorer's own eyes.

Numerous other fur-trade documents, such as Mackenzie's Voyages from Montreal (1801), Alexander Henry the Elder's Travels and Adventures (1809) and Alexander ROSS's satiric The Fur Hunters of the Far West (1855), achieve literary significance to the extent that they create a convincing narrative point of view, presenting models for later writers to draw upon.

The same is true of the writing about the Northwest Passage. The Strange and Dangerous Voyage of Captain Thomas James (1633) has intrinsic merit in its vivid description of a winter in the Arctic. James's expedition was privately financed; like the fur traders, he had the freedom to create a firm narrator's perspective. However, even though the imaginative and dramatic potential of the search is immense, that potential remains dormant in all but a few accounts, a situation arising because the narratives fail to create individual human voices through which experience can be communicated.

Influence of the British Admiralty

Most of this failure in 19th-century accounts can be attributed to the influence of the British ADMIRALTY, the agency which dominated ARCTIC EXPLORATION between 1818 and 1859. The Admiralty expected of and nurtured in its officers an objective and impersonal sensibility, one that served naval interests well, but limited the subjective dimension of literature. John Ross's A Voyage of Discovery (1819), W. E. PARRY's Journal of a Voyage for the Discovery of a Northwest Passage (1821) and Robert MCCLURE's The Discovery of the North-West Passage (1856) all suffer from this restriction.

Johann Miertsching, a Moravian missionary travelling aboard McClure's ship as interpreter, kept an evocative and powerful journal that McClure apparently tried, but failed, to suppress. The author's compassion and sensitivity to the human suffering on the nearly disastrous journey of 1850 to 1854 are freely expressed, a freedom from naval restrictions granted by Miertsching's civilian status.

There are other literary dimensions to these records: some accounts became catalysts for imaginative works, and Northwest Passage accounts, when read together, have the flavour of epic. The intrinsic value of an isolated piece, however, depends very much on the image we receive of the man behind the journal or narrative.