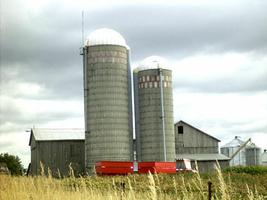 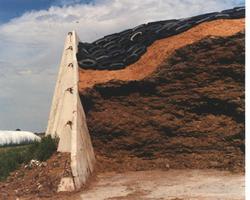 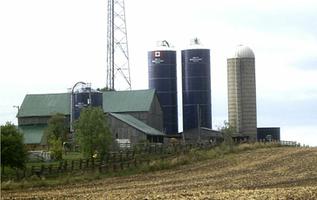 Farm silos are storage structures for silages and high-moisture grains used for livestock feeds. Silos are a common fixture in livestock and mixed-farming operations across Canada. Silage is formed by microbial fermentation of plant material under anaerobic (oxygen-free) or near-anaerobic conditions. Whole-plant corn silage (30-35% dry matter) is made by chopping the entire plant finely (1-2 cm); haylage is silage composed of wilted grass or alfalfa dried to 35-50% dry matter, again chopped finely. High-moisture grains (eg, whole-shelled, ground-shelled and ground ear corns and barley) go through the same fermentation process as silage but contain far less water. Typical dry matter content is 65-70%. They are used for high-energy feeds.

Under normal conditions, silage-producing microbial fermentation produces lactic and acetic acids until acidity is such that growth of all micro-organisms stops (after 2-3 weeks). With well-ensiled material in anaerobic storage, the quality and palatability of the feed is maintained until the material is exposed to oxygen, which causes silage to deteriorate quickly.

Silos are of bunker or tower type. The bottom-unloading tower silo allows a greater degree of automation but is somewhat more expensive to build. They are used more by dairy farmers. Bunker silos, sometimes called horizontal silos, are cheaper to build than tower silos but allow little automation and have the greatest feed loss by oxidation. They are found more often on large beef farms.

Bunker Silos
Bunker silos are paved areas surrounded on 3 sides by concrete or 3-5 m high concrete or timber walls. Forage is dumped within the walled area, compacted by tractor, covered with polyethylene sheets and weighed down with old tires. Unloading is by front-end loader or by allowing cattle to feed directly from the exposed face of the silage. The size of the silo will depend on the size of the herd to be fed.

Tower Silos
Tower silos are 15-30 m high cylindrical concrete or steel structures, usually closed with a domed roof. Some concrete silos, called stave silos, are built from concrete staves, 30 cm wide by 75 cm high concrete slabs that are stacked up into a cylindrical wall and held together with steel hoops, very much like a wooden wine barrel. Another construction method is by placing concrete inside a form. These are referred to as cast-in-place silos.

Forage is blown into the top via a pipe mounted on the silo's side. The forage consolidates under its own weight. Special unloading equipment is mounted inside. Top-unloading silos have a rotating scraper that sweeps silage through openings in the wall into a chute mounted on the side. Silage falls into a feeding cart placed at the bottom of the chute, or onto a conveyor belt for distribution to livestock. Bottom-unloading silos have a screw-type unloader, which moves silage into a central hopper, from which it is conveyed further by belt or screw conveyor.