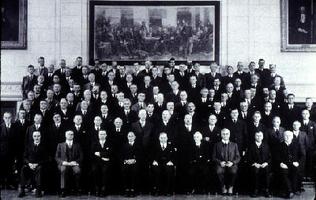 Federal-provincial relations are the complex and multifaceted networks of influence which have developed in the relationships between Canada's federal and provincial governments. These relationships have become a central element of Canadian government and policymaking, and a fundamental characteristic of Canadian federalism. They are a result of the pervasive interdependence existing between the 2 levels of government. Central and provincial government activities are intertwined in a pattern of shared and overlapping responsibilities, shared authority and shared funding in many if not most areas of public policy.

Many of the concerns of modern government cut across the loose jurisdictional boundaries found in the constitution. National purposes can often only be achieved with provincial co-operation; provincial goals often require federal assistance. As government roles in social, economic and other policy areas grew, then the need for co-operation and co-ordination - and the costs of failing to achieve it - also expanded. Through federal-provincial relations - and the related tools of INTERGOVERNMENTAL FINANCE, shared cost programs and the like - the federal government is deeply involved in fields largely within provincial jurisdiction; and provinces have increasingly sought to influence federal policies in areas such as foreign trade and transportation. Thus federal-provincial relations have grown primarily in response to the changing roles of government within Canadian federalism.

They have also been sustained by more political factors. The weakness of mechanisms for regional representation in the federal government, and the regional concentration of support for the major national parties throughout much of recent history, have stengthened the ability of provinces to act as the primary articulators of regional interests. The difficulty of achieving changes in the constitutional allocations of power has played a premium on informal mechanisms of accommodation.

Federal-provincial relations take place in many arenas. They range from the multitude of informal day-to-day contacts between bureaucrats, to more formal, set-piece meetings between ministers and first ministers. Most attention is focused on the multilateral meetings of representatives of all 11 governments, but there are also many exchanges which are bilateral or involve only a few governments. While the relationships among governments are often influenced by developments in the wider political setting, and while governments also frequently undertake unilateral actions without extensive consultation with others, the term federal-provincial relations is most often used to refer to exchanges among bureaucrats and ministers, summarized in the descriptive term "executive federalism."

No complete inventory of federal-provincial interactions exists, and the intensity and subject matter has varied over time. One estimate for 1977 records a total of 335 meetings of 158 different intergovernmental bodies for that year. The frequency appears to have diminished somewhat during the Liberal government of 1980-84, with an average of 132 meetings recorded per year. In the first year of the Progressive Conservative government elected in 1984, the number of federal-provincial meetings rose to 438, including 123 at the first ministers level, and 353 at the ministerial level. In recent years, constitutional issues and economic development matters, including international trade, have become the predominant subjects of intergovernmental discussion; in the postwar generation, the process played a central role in the development of the Canadian welfare state. In terms of programs, a 1982-83 inventory listed 316 shared activities, ranging from major national programs, such as EQUALIZATION and Medicare to a host of minor agreements. Joint arrangements are crucial parts of INTERGOVERNMENTAL FINANCE and TAXATION. Regional development activities are expressed through intergovernmental Economic and Regional Development Agreements (ERDAs).

The tone and style of federal-provincial relations varies considerably over time. In the postwar period, the term "co-operative federalism" referred to a pattern of federal financial and policy leadership. In the 1960s and 1970s, as the strength and assertiveness of provinces grew, relationships became more equal, and federal-provincial relations were widely seen as a vehicle for the expression of successful provincial claims for a greater share of fiscal resources, greater freedom for provincial policy initiatives, and greater provincial influence over federal policies in its areas of jurisdiction. The rise of a more assertive Québec nationalism, and later of interregional tensions of energy matters in the 1960s and 1970s, along with deep divisions over the constitution led many to see intergovernmental forms less as an arena for harmony and co-operation, and more as one for exacerbating disagreement.

The Liberal government of 1980-84, concerned with what it saw as a drift towards greater provincial power, sought to minimize the role of federal-provincial relations in shared decision making, acting unilaterally in many areas, and seeking to establish direct relations with citizens and groups in the provinces, without going through the intermediary of the provinces. By contrast, the Conservative government made "national reconciliation" a central goal, and sought to restore more harmonious relations, with consultation on a variety of matters.

The most important federal-provincial mechanism is the FIRST MINISTERS CONFERENCE. It is chaired by the prime minister. These conferences have become major public events, attracting national media attention and often gavel-to-gavel television coverage. Nevertheless, much of the hard bargaining takes place in closed sessions and in back-room meetings of ministers and officials. Below the first ministers conferences, and often reporting to them, are many ministerial conferences, some meeting regularly, and others, such as a ministerial committee on the US free trade negotiations, convened on an ad hoc basis. It has become common for such meetings to be held outside Ottawa and to be chaired by provincial ministers. Numerous parallel committees of officials exist, the most important of which is the Continuing Committee on Economic and Fiscal Matters, established 1955. The success of such meetings in achieving policy harmonization and a co-ordinated approach to new problems varies widely. Many federal-provincial meetings are provided with organizational and secretarial services through an intergovernmental body, the Canadian Intergovernmental Conference Secretariat. As federal-provincial relations have become more important, all governments have established offices, attached to the first minister, to oversee the province's intergovernmental affairs.

In addition to the federal-provincial mechanisms, interprovincial relationships are also important. Annual meetings of premiers have been held since 1960, not only to attempt to harmonize provincial policies but also to develop common provincial policies on matters of federal-provincial concern. On many issues such co-operation is limited by divergent political orientations and regional interests. There are also 2 regional groupings of provinces, the Prairie Provinces Economic Council and the Council of Maritime Premiers, which hold regular meetings to resolve interprovincial issues and develop common positions. The Maritimes Council has a secretariat and operates a number of joint programs for the region. Provinces have also established several interprovincial minsterial bodies.

Despite their importance, federal-provincial relations have arisen in an informal and ad hoc way; they are nowhere mentioned in the constitution. The MEECH LAKE ACCORD (see MEECH LAKE ACCORD: DOCUMENT) of 1987, however, does give a constitutional status to them, by providing a constitutional requirement for annual meetings of first ministers on the constitution and the economy. It will also give greater prominence to intergovernmental relations in the shaping of major national institutions by providing for Federal-Provincial Relations joint selection of judges and senators, and by ensuring joint federal-provincial discussion of proposed new federal spending programs in areas of provincial jurisdiction.

Assessments of the importance and value of federal-provincial relations vary widely. Virtually all observers agree that a high degree of co-ordination between the 2 orders of government is essential to effective policymaking, and that many vital programs could not have been achieved without it. But there have been many criticisms. First, it has been argued that federal-provincial conferences have too often become forums in which governments exacerbate conflict as they compete for resources and popular support. Second, it is suggested that too great an emphasis on intergovernmental consensus leads to excessive delay and a subordination of policy to the lowest common denominator.

Supporters of a stronger federal government have argued that highly visible federal-provincial conferences give undue prominence to provincial governments as national policymakers, thus undermining federal authority. Others argue that the secrecy and closed-door nature of much federal-provincial activity undermines citizen participation and reduces the ability effectively to consult with interest groups representing "non-territorial" interests. To the extent that intergovernmental agreements are made in the federal-provincial arena and then presented as faits accomplis to the 11 legislatures, it is felt that the process undermines responsible government and legislative sovereignty. The high degree of interaction in financial and policy matters, it is argued, also undermines governmental accountability.

Such critics have tended to argue for placing less emphasis on extensive intergovernmental co-operation, and more on encouraging each government to act independently within its area of jurisdiction. This model of "competitive federalism" suggests that government responsiveness and policy effectiveness is to be found more in vigorous competition than in a search for intergovernmental agreement for its own sake. Advocates of a more collaborative, or partnership, model, by contrast, emphasize the costs of competition, and the sense that in few areas can governments effectively achieve their goals alone. With 2 powerful and equal orders of government, co-operation is seen as essential.

Neither side in the debate denies the importance of federal-provincial relations: the issue is whether they should constitute something like a third order of government, with real decision-making power, or whether, instead, they should be seen primarily as opportunities for consultation and debate. Each side also tends to argue for somewhat different reforms in the process; those advocating a more competitive model call for "disentanglement" and a clarification of the powers of each level and argue for reforms in the central government which will make it more regionally responsive, and therefore more able to bypass provinces. Advocates of collaborative federalism call for a more formalized network of intergovernmental machinery designed to make co-operation more effective.