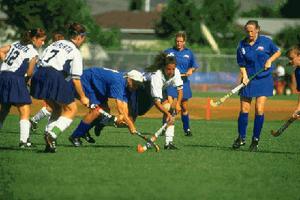 Field hockey is a stick-and-ball goal game of 11 players per team, with many of its rules patterned after soccer. A noncontact game, its distinctive features are a stick, of which only one side can be used to play the ball. The game's origins are lost in antiquity. As an organized team sport, it developed in England, the first club being formed sometime before 1861. Women in the British Isles started playing the game late in the 19th century, and it spread throughout the world, played as much by women as by men.

In Canada, field hockey is generally restricted to spring, summer and early autumn seasons, except in southwestern BC, where it can be played year-round. It is principally a girls' sport in schools, but is played by both men and women in adult leagues across the country. In the late 1990s, registered membership was just over 10 000 (8200 women and 1200 men) and the estimated total playing population, including school players, was 30 000.

The modern form of field hockey was first played in BC. In 1896, the first recorded match in Canada was played by Vancouver girls, and the Vancouver Ladies Club was formed. Men were also playing at the turn of the century in Vancouver and Victoria, and a Vancouver league was in existence in 1902. The first women's organization in Canada was formed in Vancouver in 1927. During the first half of the 20th century, field hockey was played on Vancouver Island and in the Vancouver area, and contests were recorded with teams from California and Australia in the 1930s.

After WWII, the immigration of players to Canada from all parts of the British Commonwealth influenced the establishment of field hockey across the country, and by 1959 the game was being played in the Maritimes, Ontario and Alberta. The Canadian (men's) Field Hockey Association was founded in 1961; the Canadian Women's FHA a year later. In 1992 the CFHA and the CWFHA merged to form Field Hockey Canada.

International contests have increased markedly since the 1950s. The Canadian women's team participated in the women's international tournament for the first time in 1956, and in 1979 Canada hosted 18 countries in Vancouver for that world event; Canada placed 8th. The 1978 Canadian team was the first to enter the Women's World Cup, placing 5th; since then the team has finished 2nd in 1983 (Malaysia) and 3rd in 1986 (Amsterdam). The women's team placed 5th in the 1984 Olympic Games at Los Angeles, 6th at Seoul in 1988 and 7th at Barcelona in 1992. Canadian women participated in the Pan-Americann Games for the first time in 1987, placing 3rd. They also placed 3rd in 1991, 1995 and 1999 in this international competition. Canada also hosted the first Junior (under 21) World Cup for women in 1989 in Ottawa, where 12 countries competed.