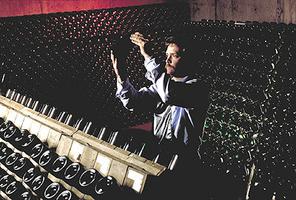 Bottling line in an Ontario winery (photo by Arne Glassbourg).

Food and beverage processing or manufacturing is one of Canada's major secondary industries and a vital component of the nation's overall AGRIBUSINESS system. Statistics Canada figures indicate that, in 1997, the food and beverage industry was the third largest employer in Canada, generating about $91 billion in domestic retail and food service sales. It spent nearly $24.7 billion on materials and supplies.

For statistical purposes, the total agribusiness system can be broken down into 5 sectors: agriculture (and fisheries); food and beverage processing; wholesale trade; retail trade; and institutional feeding (restaurants, etc). Statistics Canada figures indicate that, in 1986, agribusiness employed 1.5 million people or 11.5% of Canada's labour force. Agriculture is the largest employer, with 518 000 people.

It is interesting to note that, despite significant improvements in agricultural production, this figure has remained almost unchanged since 1971. In contrast, employment in the restaurant business expanded by an astounding 122% during the same period, from about 200 000 in 1971 to 444 900 in 1986. The third-largest sector, retail, has a work force of 230 500, followed by manufacturing with 220 200 and wholesale with 61 800.

This industrial complex is one of the world's most modern and efficient food and beverage production systems. Statistics Canada data show that, in 1996, Canadians spent only 9.8% of personal disposable income on food and nonalcoholic beverages consumed at or away from home; in 1983, 20.1%; in 1981, 21.2%. The proportions of personal income for food and beverage purchases at stores for home consumption suggest a similar trend: from 14.5% in 1977 to 14% in 1983.

Canada is full of its own weird and wonderful snacks. From Pizza Pops to ketchup chips, this Secret Life of Canada episode dives into the history of Canadian food.

In contrast, Canadian food and beverage industries have had some of the lowest levels of profitability of all Canadian industries. There has been a steady decline in recent years; however, in 1986, after-tax profit per dollar of sales was 4.6%, a noticeable increase from the decreases of 2.25% in 1980 and 2.63% in 1978. Despite low profits, the food and beverage industries continue to invest heavily in building new plants, expanding and modernizing existing facilities, and purchasing newer, more efficient process and packaging systems.

Paradoxically, food- and beverage-processing companies are high-risk operations in environmental terms because of the wastes they produce. Unlike industrial wastes polluted with toxic chemicals, effluents from food operations are a problem because of their high nutritional value. If such wastes are released untreated to surface waters, a rapid and unacceptable growth of ALGAE and bacteria may occur. In the case of algae, such development depletes the oxygen supply, destroying fish populations.

As a result, Environment Canada strictly enforces a set of effluent guidelines for every type of food- and beverage-processing operation; several provinces have even more demanding food-industry waste guidelines. The food and beverage industries are among the most highly regulated industries in Canada, affected by regulations administered by several federal and provincial departments (see FOOD LEGISLATION).

The industry employs the most modern processing and packaging techniques. For example, thermal processing of foods and beverages in cans, glass and other forms of rigid packaging permits products to be stored at room temperature for several years without deterioration in product flavour or nutritional quality. Other methods of food preservation used in Canada include freezing, freeze-drying, drying, pasteurization, pickling and fermentation.

Canadian companies are often leaders in North America in introducing new processing and packaging methods. A recent example is the use of the retortable pouch (the so-called soft tin can) for the production of shelf-stable products. Aseptic packaging of milk and fruit juices in laminated (paper and plastic) containers, a technique developed in Europe, first appeared in Canada in 1965 and was well established by the late 1980s.

One other sophisticated processing technique, food irradiation, is now being used in North America, and Canadian researchers at ATOMIC ENERGY OF CANADA LTD have been prime movers in developing this completely safe approach to food preservation. In 1987 there were over 145 irradiation installations in the world, more than 66% developed and built by AECL. Most of the systems are used to produce sterile medical and drug supplies and packaging materials, but there are 10 which are employed full time and some 30 others part time for food preservation. In 1983 the Health Protection Branch initiated a proposal that irradiation be reclassified as a food-processing method, rather than as an additive.

Most sectors of the food and beverage industries are represented by a national association, often supported by provincial counterparts. A major function of these associations is to gain industry consensus on issues affecting their sector and to consult with governments on these problems. They also act as information clearing houses.