Fort Good Hope, NWT, incorporated as a charter community in 1995, population 515 (2011c), 557 (2006c). The community of Fort Good Hope is situated on the east bank of the Mackenzie River, 805 air km northwest of Yellowknife. Established by the North West Company in 1805, it was the oldest fur-trading post in the lower Mackenzie Valley. The settlement is known for its picturesque and unusual church, Our Lady of Good Hope, which was decorated with murals by a Catholic priest in 1878 and restored back to its original condition in 1993. In recent years the settlement has become known as the home of many Dene political leaders. The community has a school, and a hotel owned by residents. Most of the residents still trap, hunt and fish for their livelihood. 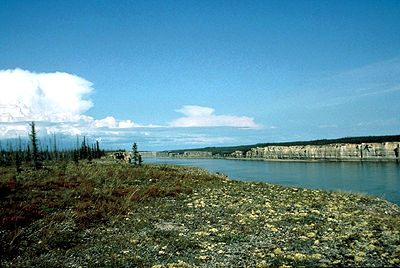