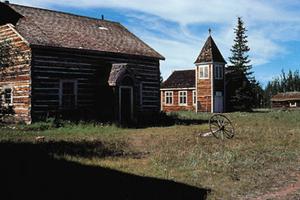 Fort Selkirk in the Yukon was established as a Hudson's Bay Company trading post in 1848 (courtesy Aerocamera Services Inc).

Located on the YUKON RIVER at the mouth of the Pelly River, Fort Selkirk was established as a HUDSON'S BAY COMPANY trading post by Robert Campbell. Its first site (built in 1848) was 2 km upstream on the Pelly but the post was moved to the confluence in the winter of 1851-52 because of spring flooding damage. Archaeological and other evidence indicates, however, that the latter site was important for trade long before Campbell rebuilt his post there. The Northern TUTCHONE used the area for fishing and traded there with the coastal Chilkat Tlingit.

The trading post was short-lived; it shut down in the summer of its establishment after it was attacked and plundered by the Chilkat. In 1898-99 the site was the base of the YUKON FIELD FORCE. A private trading post was established by Arthur Harper around 1890. A community built up around the post, supported by riverboat traffic between WHITEHORSE and DAWSON; the Hudson's Bay Company re-established a post in 1938. In the 1950s the community was abandoned when the highway between Whitehorse and Dawson passed it by.

Fort Selkirk is now co-owned and co-managed by Yukon Government and Selkirk First Nation. Over 40 buildings are maintained as a HISTORIC SITE to interpret the evolution of many such trading posts and FIRST NATIONS communities in the Yukon. The Selkirk First Nation provides interpretive programming at Fort Selkirk in the summer months and the site is accessible by boat from Minto on the Klondike Highway. In the summer of 2006 remains of the first site were uncovered during an archaeological dig.