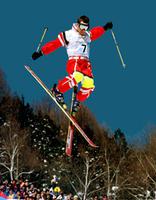 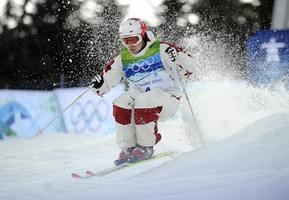 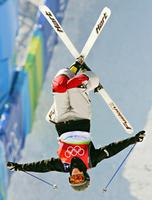 Freestyle skiing is the newest addition to the SKIING family of disciplines. Freestyle's distinctive 3-event format - moguls, ballet and aerials - has set it apart from its competitive skiing cousins and made it one of the most popular and spectacular winter spectator sports.

The evolution of the aerials event in freestyle skiing can be traced back to 1907, when the first flip on skis was recorded. It was not until the 1950s, however, that Stein Eriksen, the high-profile Olympic alpine silver medallist, popularized front and back aerial somersaults during professional ski shows in Vermont and Colorado. In 1965, Austrian gymnast Herman Goellner surpassed the single somersaults achieved by Eriksen by performing the first double, triple and mobius (full-twisting) flips. Sites across Vermont also bore first witness to the feats of Goellner and Tom Leroy, who performed simultaneous inverted aerials to the astonishment of large ski-show crowds.

The ballet event was born in 1929, when Dr Fritz Reuel conceived of a form of skiing similar to figure skating and developed the Reuel Christie and other spinning maneuvres for skiers. Doug Pfeiffer's School of Exotic Skiing (1956-62) expanded Dr Reuel's premise by teaching new tricks such as the mambo, the Charleston, spinners, tip rolls and crossovers, and was the first evidence that on-hill instruction was being provided for the skiing public.

Organized freestyle skiing in Canada took shape when a group headed by John Johnston founded the Canadian Freestyle Skiers Association in 1974. Shortly thereafter the Canadian Ski Association adopted freestyle as a discipline within its jurisdiction and hired Johnston to administer and organize competitive freestyle programs for amateur skiers across the country. In 1979, the International Ski Federation (FIS) officially accepted freestyle as a member of the international skiing community, and the first FIS-sanctioned World Cup freestyle events were held. A new dimension was added in February 1986, with freestyle skiing holding its first-ever FIS World Championship in Tignes, France. The championships were held for a second time in 1989, and have been staged every 2 years since. In 1995 Canada established its own national governing body, the Canadian Freestyle Ski Association. There are now over 50 active freestyle clubs within Canada. One of the most important steps in the evolution of the sport was taken when the International Olympic Committee (IOC) accepted freestyle skiing as a demonstration event in the 1988 and 1992 Winter Olympic Games.

The Canadians who have dominated the international freestyle competitive circuit over the past decade went relatively unheralded until the late 1990s. These early athletes include five-time world champions John Eaves and Marie-Claude Asselin, and World Cup Grand Prix championship winners Greg Athans, Stephanie Sloan, Lauralee Bowie, Jean Corriveau, Craig Clow, Peter Judge, Bill Keenan, Yves LaRoche, Anna Fraser, Meredith Gardner and Jean-Marc Rozon. Out of the first-ever International Ski Federation World Championships held in Tignes, France, in 1986, came 2 Canadian world champions - Lloyd Langlois and Alain Laroche, who, because of their records of accomplishment on the international level, were elected to the Canadian Amateur Sports Hall of Fame in April 1987. Canadians demonstrated their dominance of the aerials events at the 1988 and 1992 Winter Olympics. Jean-Marc Rozon won the gold medal and Lloyd Langlois won the bronze in 1988. Philippe Laroche won gold and Nicolas FONTAINE the silver in 1992. Canadians won 4 medals at the 1993 World Championships, with gold for moguls skier Jean-Luc BRASSARD, for aerialist Philippe Laroche and for combined skier Katherina Kubenk. Moguls skier Bronwen Thomas won a bronze.

In 1994 at Lillehammer, Jean-Luc Brassard captured the first Olympic gold in freestyle skiing. Despite its international record, Canada was shut out of the medals in the 1998 Nagano Games. Brassard was able to accomplish only a fourth-place finish in the moguls. In the later 1990s, Nicolas Fontaine dominated the world scene by claiming the World Cup aerialist title for 4 consecutive seasons (1996-97, 1997-98, 1998-99, 1999-2000).

Canadian freestyle skiers continued to be a consistent force on the international scene at the turn of the century. In 2000, Canada won the prestigious Nations Cup for the third time in 4 years. The Nations Cup is awarded to the nation amassing the most World Cup points over the season. Nicolas Fontaine claimed another World Cup title early in 2002, a month before the Salt Lake 2002 Olympic Games. He was the first man to ever perform 2 quadruple somersault maneuvres in competition (Mont Gabriel, Québec, at the Canadian National Championships 2000). At Salt Lake, Veronica Brenner and Deidra Dionne became the first Canadian women to win Olympic medals in freestyle skiing, winning silver and bronze respectively. Men's aerialist Jeff Bean placed fourth in his event and Jennifer HEIL placed fourth in the women's moguls event.

In two stellar performances, Heil and her team mate Alexandre Bilodeau claimed two medals at Vancouver - silver and gold. Heil performed exceptionally well but was edged out slightly by US skier Hannah Kearney, who won gold with her score of 26.63 points. Heil won silver with 25.69 points. Bilodeau became the first Canadian Olympian to win a gold medal on Canadian soil when he won the moguls competition over Canadian-born Dale Begg-Smith, who was skiing for Australia.