In architectural circles, they are calling it a masterpiece, the crowning achievement of Canadian-born, California-based Gehry's long career.

This article was originally published in Maclean's Magazine on November 3, 1997

In architectural circles, they are calling it a masterpiece, the crowning achievement of Canadian-born, California-based Gehry's long career.This article was originally published in Maclean's Magazine on November 3, 1997 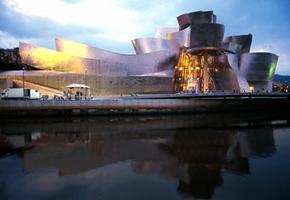 The spectacular futuristic museum, designed by expatriate Canadian Frank Gehry, has been the target of Basque terrorists (courtesy Maclean's).

Long before Frank Gehry won international renown, back in the days when he still lived in Toronto, he had another name. He was called Goldberg then, and he was a lonely little kid who, on the floor of his living room, liked to fashion wood scraps from his grandfather's hardware store into houses and roads and entire towns. It was, he has said, the time when he took his first steps on the path that would eventually lead to the reputation he enjoys today as one of the world's most original architects. Along the way, he managed to make many marvels, among them a law school in Los Angeles that exudes quiet dignity, a cultural centre in Paris that almost dances, a whimsical office building in Prague, an exuberant museum in Minneapolis and a gem-like little restaurant in Kobe, Japan. But all of Gehry's earlier works pale in comparison to the wondrous creation he has wrought in the most unlikely of locales, on the banks of a muddy river in the heart of a sober industrial city in northern Spain's troubled Basque country.

In architectural circles, they are calling it a masterpiece, the crowning achievement of Canadian-born, California-based Gehry's long career. But by any standards, the 68-year-old architect's $210-million Guggenheim Museum Bilbao, officially unveiled two weeks ago, is a breathtaking affair, beggaring description. It is all flowing curves and soaring angles, a swirl of bright glass, honey-colored limestone and gleaming titanium. The scale is vast, 24,000 square metres of interconnected buildings gathered under a metal roof, upon which blossoms the unfolding petals of a gigantic metallic flower. Despite the heroic proportions, the edifice floats, a function of the 33,000 rectangular titanium shingles that blanket much of its sweeping exterior. The shingles shimmer in the shifting light, deep purple one moment, dove gray the next. In the evenings, they can take on a soft, buttery glow. "Frank has written a melody," says an admiring Moshe Safdie, another Canadian architectural expatriate now living in the United States. "Not quite a Bach fugue, perhaps, but nevertheless a very lyrical place."

Almost as remarkable as the building itself is the location. It rises from a stretch of what used to be abandoned factories and industrial wasteland wrapped within a loop of the river Nervión, smack in the middle of Bilbao. The city, with one million inhabitants in its core and environs, is Spain's fourth largest, a once mighty, now decaying centre of steelmaking, shipbuilding, banking and, not least, periodic eruptions of terrorism by armed militants intent on forging an independent Basque state in northern Spain. On the eve of the Guggenheim's inauguration, a Basque policeman was shot to death on the museum's doorstep while foiling a plot by Basque separatists. They had planned to disrupt the Oct. 19 opening ceremonies, presided over by Spain's King Juan Carlos and Queen Sofía, with an attack by remote-controlled, rocket-propelled grenades concealed in the building's ornamental shrubbery.

Gehry's creation makes no attempt to camouflage Bilbao's rough edges. On the contrary, the architect cites the city's "raw industrial muscle" as one of the primary sources of his inspiration for the building he designed. It might be a feathery concoction, light as air, but it is also fully in tune with its brawny surroundings. One end of the museum straddles a still-functioning railroad line. The other end ducks under a six-lane steel suspension bridge - one of Bilbao's main cross-town arteries - and comes up the other side, finishing in a high limestone-clad tower that serves no other function but to wrap the bridge and its constantly humming traffic into the structure of the museum itself. "That's one of the most extraordinary things about the building," says Phyllis Lambert, director of Montreal's Canadian Centre for Architecture, "how it remains an essential part of the industrial environment where it is set."

In a similar fashion, Gehry's structure pays homage to Bilbao's past, as well as offering a gesture towards the city's hopes for the future. The museum's riverside face, almost entirely titanium, is undeniably futuristic. But at the same time, those space-age forms that sweep majestically along the bank of the Nervión also summon images of the steel-hulled ships that once underpinned Bilbao's prosperity.

Modern-day residents of the city are hoping for a return to those happier days. And the new Guggenheim is an essential part of the regional Basque country government's plans to reinvent Bilbao as a centre for international culture and finance. To this end, the local authorities have launched an ambitious $2.1-billion redevelopment scheme that has attracted, in addition to Gehry, a constellation of similarly renowned architects who are busily at work on a host of projects, among them a new airport, subway system, transportation hub, concert hall and convention centre.

All of it revolves around Bilbao's Guggenheim, a project that was launched in 1991 when Basque regional government representatives approached Thomas Krens, director of the New York City-based Solomon R. Guggenheim Foundation, operator of Guggenheim's two modern art museums in New York as well as Peggy Guggenheim's extensive collection in Venice. Aware that Krens was in search of a site to expand internationally, the Basques offered Bilbao. "I was a little skeptical at first," Krens told Maclean's, "but it did not take long to convince me, particularly after the Basque authorities agreed to pay the $150 million [U.S.] construction costs, $50 million for new acquisitions and $20 million for the use of Guggenheim's name and administration."

Krens never had any doubts about Gehry, who was originally selected by the Guggenheim director as one of only three architects to take part in a "modified competition" for the contract. Each was given $10,000 and three weeks to come up with a proposal. It was exactly the kind of contest that would appeal to Gehry, a controversial figure in the world of architecture who has been something of a high-stakes gambler ever since he began practising his profession in his 20s in Los Angeles, the city to which his family relocated when he was 17. Gehry's father was in search of opportunity after a checkered business career in Canada, which included a long stint in Timmins, Ont., supplying local restaurants with slot machines. It was in Los Angeles that Gehry changed his name, dropping Goldberg on the urging of his wife, who picked the new name from a telephone book.

Idiosyncrasies aside, Gehry did manage to deliver the Guggenheim Bilbao on time and on budget. And that delighted Krens almost as much as the finished museum itself. "The building that Frank designed has incredible potential for the display of art," says Krens, referring to its 11,000 square metres of exhibition space, almost twice that available in the two New York Guggenheims combined. One of the galleries - christened by the museum's staff "the boat" - is enormous: 25 m wide, 130 m long, with a gently vaulting ceiling and no supporting columns to interrupt the sweep. It is so large, in fact, that it comes close to dwarfing some of the massive works currently on view, including Richard Serra's Snake, 158 tonnes of rolled, rusting steel arranged in three parallel serpentine ribbons, each 31 m long and four metres high.

There are 244 other works on display in the opening exhibition, 50 newly acquired by the Bilbao museum, the rest from Guggenheim's 10,000-piece collection. They are scattered around 19 galleries that radiate out on three different levels from a stupendous central atrium, more than 50 m high, half again as tall as Frank Lloyd Wright's overpowering atrium in the Guggenheim's original museum on New York's Fifth Avenue. Unlike Wright, however, Gehry's building has been designed with the artists' needs in mind. "He actually knows many of the artists whose works are on display," says Lambert, "so there is a kind of dance back and forth between the artists' works and the space he has created for them." It is a goal that Frank Gehry has been pursuing throughout his career, the one that began long ago on his living room floor in Toronto.