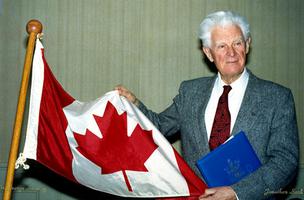 G.F.G. Stanley holding the flag which he was instrumental in designing (photo by Jonathon Sark)

In 1964 Stanley wrote to the committee in charge of finding a design for a new Canadian flag, arguing for a design that would be simple enough for children to draw. The sketch that he included at the bottom of his memo was unanimously approved by the committee.

Stanley was lieutenant-governor of New Brunswick from 1982 to 1987. For 10 years (1982-92) he was Honorary Colonel of the Royal New Brunswick Regiment. In 1976 he was awarded the Order of Canada and in 1995 he was promoted to the rank of Companion within the order.