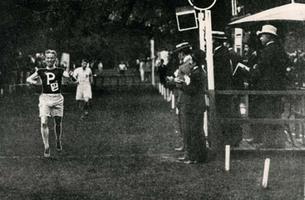 George Washington Orton, runner (born at Strathroy, Ont 10 Jan 1873; died at Meredith, NH 26 June 1958). Canada's first OLYMPIC champion, George Orton was one of North America's premier athletes in the 1890s. He participated in several sports, particularly soccer, as well as track events. He played all-star soccer at the University of Toronto, studying romance languages, before enrolling at the University of Pennsylvania in 1893. He completed a PhD in romance languages in 1896 and became fluent in nine languages.

Orton was a sports pioneer who applied a scientific approach to his training that was methodical and academic and focused on the technicalities of running. He became a prolific writer on sport and running. While a student in Toronto, he dominated the half-mile and mile track events in Canada and the US, winning both the Canadian and American mile championships in 1892 and 1893. By 1900 George Orton had accumulated 121 victories, including 15 American championships in the one mile, 10 miles, cross country, steeplechase and English steeplechase events.

Since Canada sent no team to the 1900 Paris Olympics, he competed for the US, winning the 2500 m steeplechase and finishing 3rd in the 400 m hurdles. It was not until many years later that anyone realized that a Canadian had won an Olympic competition.