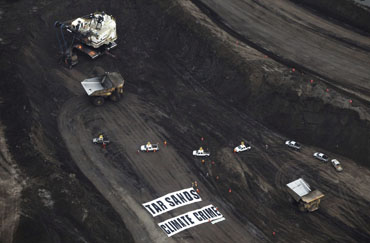 Greenpeace activists from Canada, France and the US place a banner reading "Tar Sands: Climate Crime" near the open-pit mine at the Shell Albian Sands outside of Fort McMurray, Alta, 2009(photo by Colin O'Connor, courtesy Greenpeace)

Greenpeace originated in Vancouver (1971) as a small group opposed to nuclear testing in the Pacific, and has blossomed into one of the largest and best-known environmental organizations in the world, addressing itself to a wide range of international and local issues. Through nonviolent confrontation it attempts to draw attention to violations of ecological principles, such as the equal rights of all species to exist and flourish. No longer based in Canada, Greenpeace maintains relatively autonomous offices throughout the world, co-ordinated by the Greenpeace Council in Amsterdam.

The group has called for an energy revolution using scientific innovation to combat climate change. It developed one of the first scenarios assessing the impacts of mitigation measures on the global climate and developed the first refrigerator free of ozone-depleting substances. (See also Ozone Depletion.)

In the hope that public pressure will help change policies, Greenpeace aims for maximum publicity for its activities. In its most publicized campaigns, against nuclear testing and sealing and whaling policies, the environmentalists have intervened directly and exposed themselves to risk.

Greenpeace ship Arctic Sunrise outside Longyearbyen Svalbard, Norway. The Arctic Sunrise is an icebreaker operated by Greenpeace. The vessel was built in 1975 and has a gross tonnage of 949 tonnes. Photo taken on: October 2, 2012

The public's response to Greenpeace has varied widely from apparently almost unanimous support of antinuclear testing and "Save the Whales" campaigns to very strong opposition to some of the tactics the group employs, often on more local issues. Despite this fluctuation, more than $9 million is raised yearly in Canada alone through membership fees, donations and the sale of promotional items. The success of Greenpeace tactics is difficult to measure, but certainly it has brought various issues to public attention.