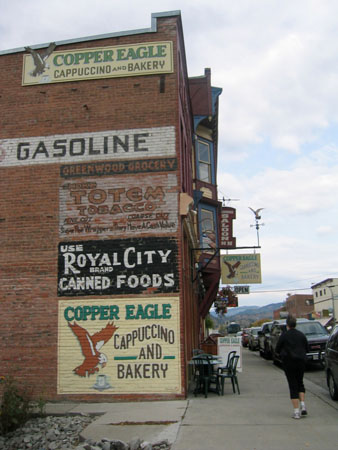 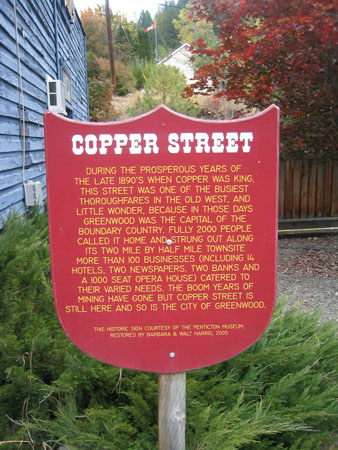 Prospectors staked outcroppings of copper ore in the area from 1886 onwards, and in 1891 the famous Mother Lode mine at Deadwood, 3 km W of Greenwood, was discovered. The townsite, named after Greenwood mining camp in Colorado, was laid out in 1895 and by 1899 the population reached 3000. The BC Copper Co opened a smelter in 1901 to treat the ore from the Mother Lode mine and employed up to 450 men in its mine and smelter. After WWI, however, a drastic fall in copper prices caused the closure of both operations, and Greenwood became little more than a ghost town.

It was revived in 1942 when 1200 Japanese Canadians were interned there. Some of them remained after the camp was closed in 1946 and about 10% of local residents are of Japanese origin.

Greenwood's economy is based on the forest industry with tourism and small business as secondary industries. Visitors are reminded of the boom years by the gaunt smokestack of the old smelter located in the industrial ruins of Lotzkar Park and the old Court House, preserved nearly unchanged. Greenwood lays claim to being Canada's smallest city by population. By area it is also one of Canada's smallest at 2.52 km2; this title, however, belongs to DUNCAN, BC, which is 2.05 km2.