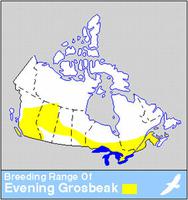 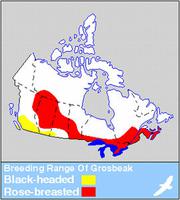 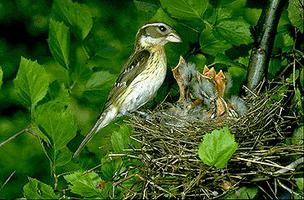 Females are brown with dark streaks but have the characteristic large, white bill (Corel Professional Photos). 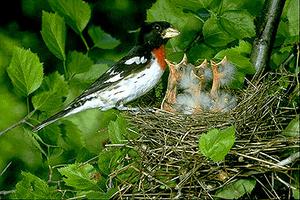 Rose-breasted grosbeaks (Pheucticus ludovicianus) are common in deciduous forests from Nova Scotia to northern BC and the southwestern Mackenzie River valley. Males have striking plumage: black heads; black and white backs, wings and tails; white underparts; a rose red, triangular patch on the breast; and white bill In flight rose red underwing linings are visible. Females are brown with dark streaks, but have the characteristic large, whitish bill.

The black-headed grosbeak (P. melanocephalus), occurring in wooded valleys from southern BC to southwestern Saskatchewan and rarely Manitoba, is distinguished by its yellow-brown underparts and brownish collar and rump. These 2 species are similar in size. Females of both are easily confused with one another, and the males have similar songs. Hybrids have been found where ranges overlap.

Evening grosbeaks (Coccothraustes vespertinus) are familiar winter birds and readily attracted to feeders with sunflower seeds. Males have lemon yellow bodies; brown crowns, necks and upper backs; black tails and wings with large, white wing patches; and large, greenish yellow bills. The plumage of the females is duller. Their summer distribution is uneven across their range. Highest densities of the evening grosbeak are usually found in areas of spruce budworm (Choristoneura fumiferana) outbreaks. During outbreaks the budworm larvae and pupae can account for as much as 80% of the evening grosbeak's diet.They are known to occur from BC across the coniferous forests to the Maritimes (recent arrivals).

Pine grosbeak (Pinicola enucleator), the largest grosbeak in Canada, breeds across northern Canada, from northern Yukon to Newfoundland, and south along the Rocky Mountains in BC and Alberta. Males are predominantly pinkish red, with 2 white bars on grey wings. Female and immature pine grosbeaks are grey, with wings similar to males, and head and rump tinged with yellow. They prefer pine and spruce trees, extracting seeds from cones. In fall and winter they also feed on fruit, berry seeds and buds. Their call notes of usually 3 tuneful whistles are extended to form a song. During winter visits to southern Canada this species appears relatively tame as it rarely encounters humans within its remote breeding range.