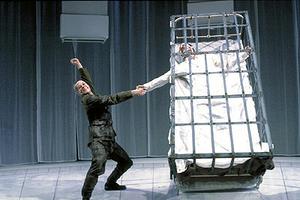 Vanderhaeghe won the Governor General's Award for his first book, Man Descending (1982), a short-story collection that later won the Faber Prize in Britain. His second short-story collection, The Trouble with Heroes, and Other Stories, was published in 1983, and Things as They Are? came out in 1992. Vanderhaeghe co-authored The Urban Prairie (1993), which explores the region's urban heritage through essays, paintings, photography, and other visual media. Vanderhaeghe is also known as a playwright. His play I Had a Job I Liked. Once (CAA Award for Drama), produced in 1991, presents a boy's encounter with his tormentors in a western mining town in 1967. Dancock's Dance, first produced in 1995, is set in 1918; it dramatizes the true story of the inmates of the Saskatchewan Hospital for the Insane, who kept the institution functioning when staff were struck with Spanish flu.

Vanderhaeghe's novels have attracted a wide readership and international acclaim. His first novel, My Present Age (1984), earned a Booker Prize nomination and has been translated into several languages. Homesick (1989), a spirited novel exploring the power of family bonds to heal and destroy, was co-winner of the City of Toronto Book Award, strengthening his growing reputation as one of Canada's finest writers.

Vanderhaeghe won his second Governor General's Award for The Englishman's Boy (1996), which was also named Best Book of the Year at the Saskatchewan Book Awards and short-listed for both the Giller Prize and the International IMPAC Dublin Literary Award. The Englishman's Boy brings together two compelling tales--one set in 1920s Hollywood, and the other in the Canadian Wild West of the 1870s--recounted by a narrator in Saskatoon in 1952. A television mini-series based on the novel was produced in 2006

The 19th-century West, Canadian and American, is also the main setting for Vanderhaeghe's best-selling and award-winning The Last Crossing (2002), a gripping family saga, love story, and western epic. It won the Saskatoon Book Award, and was named Book of the Year at the Saskatchewan Book Awards and by the Canadian Booksellers Association. A finalist for the Commonwealth Writers' Prize, The Last Crossing was also the choice of the 2004 Canada Reads panel.

Completing Vanderhaeghe's Western "trilogy," A Good Man (2011) also explores the relations between Canadians, First Nations and Americans in the Saskatchewan-Dakota borderlands as the "Wild West" is overtaken by forces of social order. The novel traces the life of Wesley Case, an Easterner who goes west to escape the complications of his past, and finds there yet more tangles of love and violence, darkness and diplomacy.

Guy Vanderhaeghe is a recipient of the Saskatchewan Order of Merit (2003), an Officer of the Order of Canada (2003) and a Fellow of the Royal Society of Canada. He was awarded the Harbourfront Festival Prize and the Writers' Trust of Canada Timothy Findley Award (2004), both for the significance of his body of work. Vanderhaeghe was selected as a 2008 Trudeau Fellow, participating in the Trudeau lecture series of 2009-10.