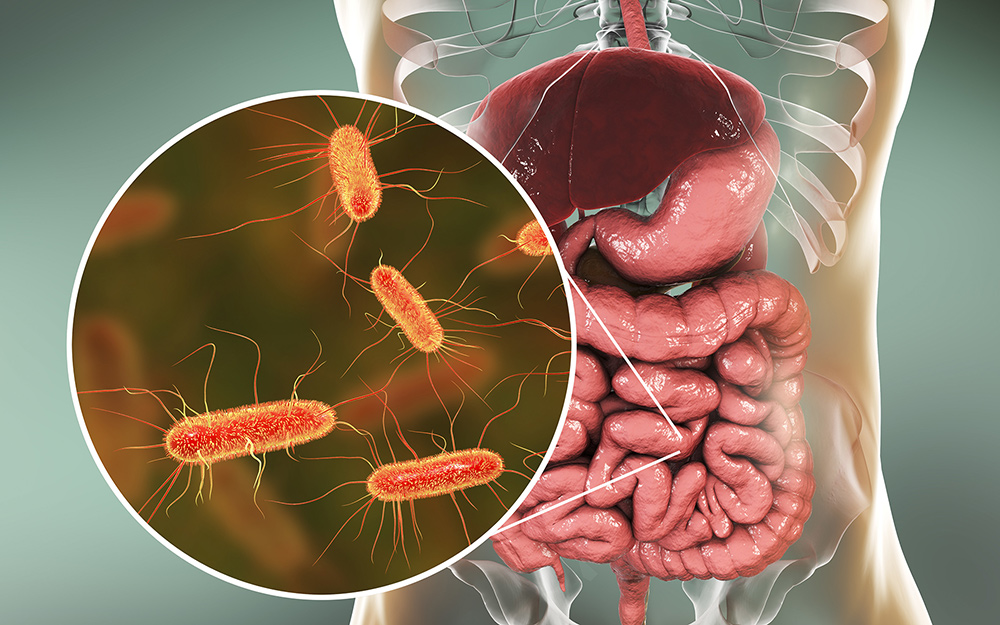 Escherichia coli (commonly known as E. coli) refers to a large group of bacteria first identified in 1885. This group includes many strains of harmless E. coli that are in the intestines of every mammal.

E. coli wasn’t recognized as a food-borne cause of disease until 1982, when outbreaks occurred among customers of fast-food restaurants in the United States. In these and other outbreaks, scientists identified a particular strain of E. coli called O157:H7. While other harmful strains exist, O157:H7 remains the most common source of E. coli infection in North America.

DID YOU KNOW?
Escherichia coli is named after the German-Austrian pediatrician Theodor Escherich, who first identified it in 1885.

How Is E. coli Infection Transmitted?

E. coli O157:H7 is found in the feces of cattle, goats, sheep and other mammals. While it is perhaps most associated with undercooked ground beef, it has appeared in other animal products such as dry salami, roast beef, and unpasteurized milk and yogurt.

It can also appear in raw fruits and vegetables and unpasteurized fruit drinks (e.g., apple cider). In such cases, crops may have been irrigated with feces-contaminated water or tainted directly with feces from animals grazing on those lands. E. coli can also contaminate untreated drinking water, and can be contracted through direct contact with animal or human feces.

People infected with E. coli O157:H7 may experience severe abdominal cramps, diarrhea, bloody diarrhea, and vomiting. Most people with these symptoms recover in less than two weeks without treatment.

A consequence of a small proportion of cases is hemolytic uremic syndrome (HUS), in which the kidneys may be seriously compromised, at least temporarily. A toxin called verotoxin (also known as verocytotoxin or Shiga toxin) produced by this strain of E. coli causes HUS. In some cases, those who develop HUS may experience long-term difficulties in kidney function and require intensive care and regular dialysis. In rare cases, this condition may cause death.

An outbreak of HUS among 14 children in the Toronto area in 1980 is now recognized as one of the earliest known instances of E. coli O157:H7 infection in North America. Thirteen of the children were treated at The Hospital for Sick Children in Toronto. The fourteenth died suddenly at home. The highly unusual event spurred investigations by Canadian medical researchers. Over the four years that followed, they linked the outbreak to unpasteurized apple juice containing E. coli. This discovery added to the work of American researchers who, in 1982, linked illnesses among customers of fast-food restaurants in Oregon and Michigan to E. coli in undercooked hamburgers. The third major outbreak of 1982 affected 31 residents of a nursing home in Ottawa. 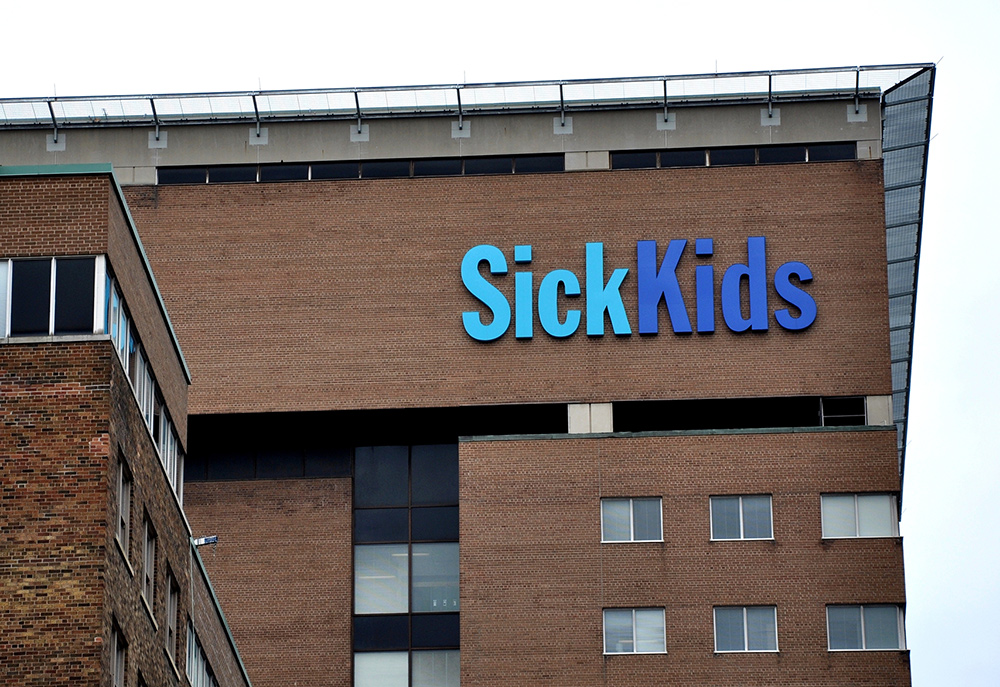 Also known as The Hospital for Sick Children. 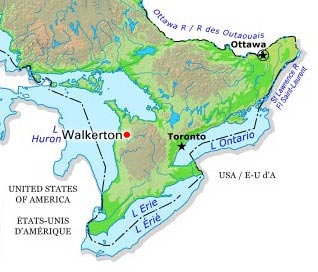 In 1985 in London, Ontario, 73 residents and staff in a nursing home contracted E. coli and 19 residents died. The source appears to have been uncooked meat in sandwiches. 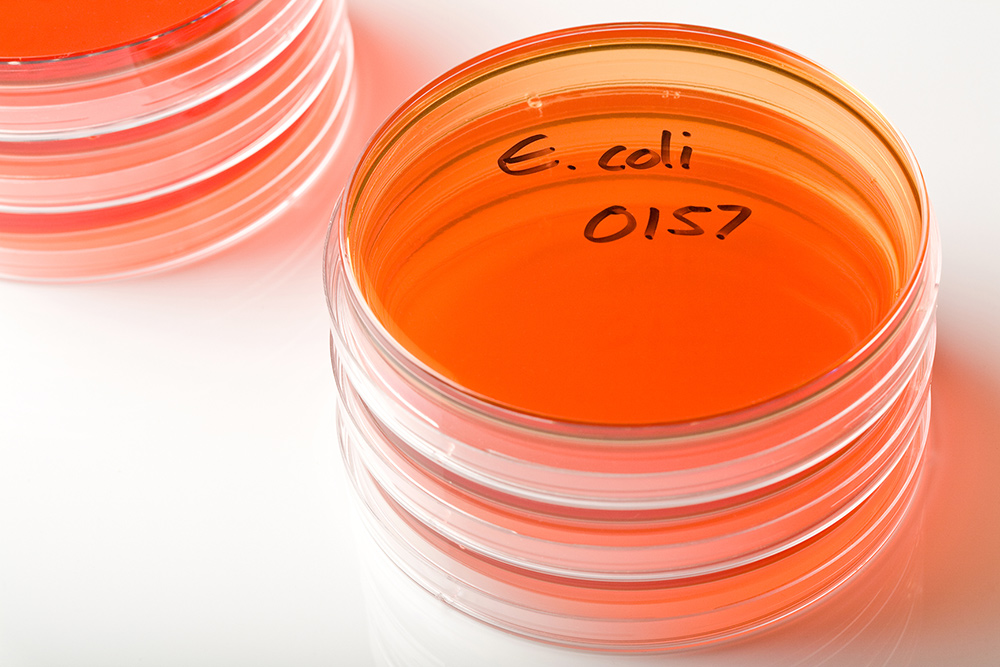 A petri dish used for studying microorganisms such as E. coli.

In Canada, the number of cases of food-borne E. coli infection — once as high as about 1,200 per year — has dropped since 2001 to less than 500 per year. A variety of changes and initiatives in different sectors have helped achieve this reduction.

Despite the life-threatening events that came before it, it was the large 1993 multi-state outbreak in the United States that generated international interest in this disease. Eleven batches of hamburgers sold by a fast-food chain in the western states infected over 700 people. Most of those who had kidney failure (about 50), and the four who died, were young children. This created such a concern that new food-safety policies and systems were introduced.

PulseNet, an electronic network that allows scientists to quickly identify and respond to outbreaks of food-borne illness, was created in the US after the 1993 outbreak. It was implemented in Canada in 2000. Since then, improvements in beef-processing operations have also played a key role in limiting E. coli infection.

Federal agencies have made policy changes to reduce the risk of E. coli infection from other foods, including unpasteurized fruit juices. For example, in 1998, the Canadian Food Inspection Agency introduced its Code of Practice for the Production and Distribution of Unpasteurized Apple and Other Fruit Juice/Cider in Canada.

Educational initiatives, such as the Fight BAC! campaign launched by the Canadian Partnership for Consumer Food Safety Education in 1998, have boosted public awareness of safe food-handling practices.

The Walkerton outbreak in 2000, and the judicial inquiry that followed, prompted changes to water management practices in Ontario and underscored the need for safe drinking water nationwide. However, in some communities, tainted drinking water remains a major problem. Boil-water advisories are especially common on First Nations reserves across the country. The Liberal government of Justin Trudeau has committed to improving water quality in these communities by funding new water systems.