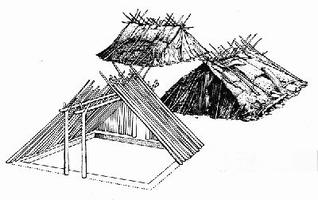 Han ("people of the river") live in the northern territories, predominantly the Yukon and Alaska. Many of the Han, also known as Tr'ondëk Hwëch'in ("people of the Klondike region"), live in and near Dawson City and are a self-governing First Nation.

Han territory traditionally straddled the Yukon-Alaska boundary, extending along the Yukon River from about 20 km south of Dawson northward to about 50 km south of Circle, Alaska. Before the Klondike Gold Rush there were three Han communities along the Yukon River: Nuclako-Fort Reliance near Dawson, Johnny's Village near Eagle and Charley's Village in Alaska, though the Han ranged far up the Klondike (a derivative of the Han word "Tr'ondëk"), Forty Mile (Ch'ëdä Dëk) and other rivers.

After breakup in the spring and into the summer, families moved to camps along the Yukon River where they prepared their equipment and caught king and chum salmon, whitefish and pike. During the summer they joined other band members at fish camps along the river to harvest, smoke and dry the salmon and other fish. Large summer communities served as points for band and intertribal festivities as well as for salmon fishing. As fall approached, the Han left the river to hunt, repair their caribou surrounds, and fish in smaller rivers. In late autumn they returned to the Yukon, grouping into smaller communities during the fall and winter and intermittently leaving the river to hunt for moose, caribou and other game, and to operate their caribou surrounds.

Han society was divided into three exogamous matrilineal clans. Clan membership carried responsibilities such as hospitality and protection to clan members, and ceremonial obligations to those in other clans, such as cremating their dead. There was no formal organization and status and band leadership was attained through individual ability and achievement. The primary social unit was the nuclear family, sometimes including elders, which often worked in partnership with a closely related family. Cross-cousins were encouraged to marry; a young man usually lived at first with his wife's parents, then established his own residence and, wealth permitting, obtained additional wives. Polyandry also was known.

Han ideology was similar to that of other Athapaskan groups of the Yukon. Shamanism was practised by both men and women to predict the outcome of the hunt, cure illness and destroy enemies. Artistic endeavours were manifested primarily by decorations on clothing and accessories and in songs.

Indirect European influence, principally from coastal Alaska, did not reach the Han until the end of the 18th century. After 1847 the Han dealt directly with Hudson's Bay Company traders at Fort Yukon located in Gwich'in territory, but the first local settlers were American traders at Fort Reliance and Fort Eagle, 1874-85. By 1885 the focus of trade had changed from the fur trade to servicing the fledgling placer mining industry. Thereafter, the Han obtained a relatively complete line of Euro-American hardware, clothing and food staples from the trading posts. Gold strikes on the Fortymile River late in 1886 opened the isolated area to outside settlement, and within 10 years Han lifestyle was completely disrupted by the Klondike Gold Rush, especially for the Han living near Dawson City, which was one of the most active areas at that time. During the Gold Rush, almost all the Han (Tr'ondëk Hwëch'in) relocated to the Moosehide reserve near Dawson City.

Today, many of their highly acculturated descendants live in their original homeland in or near Dawson City, including nearby Moosehide, although after the 1950s the majority of people living on the Moosehide reserve moved to Dawson City.

The Comprehensive Land Claim Agreement has opened new opportunities for local industry, employment and political, social and cultural development, and in 1998 the Tr'ondëk Hwëch'in, Little Salmon-Carmacks and Selkirk First Nations successfully negotiated their land claim and self-government agreements under the Umbrella Final Agreement.