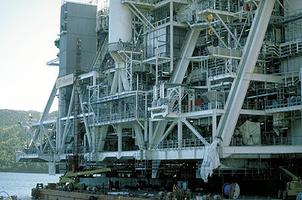 On 19 May 1982 the governor-in-council asked the Supreme Court of Canada whether Canada (the federal government) or Newfoundland has the right to explore and exploit the mineral and other natural resources of the seabed and subsoil of the Continental Shelf in the area of offshore Newfoundland approximately 320 km east-southeast of St John's, and whether Canada or Newfoundland has legislative jurisdiction to make laws in relation to such exploration and exploitation (Newfoundland Reference Re Continental Shelf) (seeRESOURCE RIGHTS). The Court held, in March 1984, that Continental Shelf rights are an extraterritorial manifestation of external sovereignty because they were rights recognized by international law, and hence these rights fall under the jurisdiction of the federal government. The Court also held that the federal government had legislative jurisdiction in relation to the right to explore and exploit in the Continental Shelf by virtue of the PEACE, ORDER AND GOOD GOVERNMENT power in its residual capacity. Moreover, Newfoundland did not, prior to its entry into Confederation in 1949, have external sovereignty to exercise rights to the continental shelf.