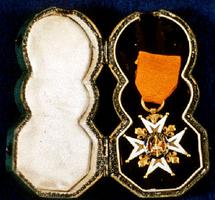 The achievement of excellence in any field of endeavour has always won popular respect and acclaim. From earliest times, heroism, military and athletic prowess, outstanding leadership and civic merit have been rewarded in tangible and symbolic ways. The conferment of honours was formerly a prerogative of emperors and kings, but is nowadays the practice of even the most egalitarian regimes. The many forms of honour include the victor's triumph in ancient Rome and the astronauts' ticker-tape parade, the accolade received from the sovereign's hand, and the award of the NOBEL PRIZE, the badge of knighthood and the silk rosette worn in the buttonhole.

Marks of royal favour have been known in what is now Canada from the earliest times of European habitation. Settlers in New France at the beginning of the 17th century took for granted that their governor and his principal officials would be of noble rank. Contrary to the Old World tradition, in the colony the acquisition of land did not affect the owner's status: the SEIGNEURS did not gain entry into "la noblesse" merely because they were landholders. Some were ennobled by Louis XIV, however, for their part in developing and defending the colony (see CROIX DE SAINT LOUIS).

When the colony came under the British Crown after 1760, titles were not uncommon among the officials sent out to conduct civil and military affairs. Titular distinctions from the French period gradually fell into disuse. No indigenous form of honours was introduced to recognize the contributions of those who were instrumental in the growth of responsible government and the maturing of the colony's institutions, but an attempt was made to include such a provision in the arrangements leading up to Confederation. In 1866 Lord MONCK, then governor general of British North America, sent a dispatch to the Colonial Office in London recommending the creation of an order of knighthood for Canada as an incentive to public service. Awards would be made by the new Dominion's governor general on behalf of the sovereign. In order to underline the award's Canadian character, he suggested calling it the "Order of St Lawrence." The proposal was quietly shelved by the home government. To relinquish control of honours, in the opinion of the colonial secretary, must inevitably lead to a weakening of the imperial tie. It was concluded that there should be no separate order for Canada but that the governor general would be asked to name a few persons each year for appointment to existing British orders. This policy, to which successive British ministers adhered, was a source of recurring friction between Ottawa and London until honours for Canadians were discontinued entirely after WWI.

Sir John A. MACDONALD, Canada's first prime minister, did not contest the British policy, but he pressed constantly for a more generous annual allotment of places. Alexander MACKENZIE, prime minister 1873-78, would accept no title himself but became incensed upon learning that London planned to honour a prominent Canadian entirely without reference to Ottawa. In response to Mackenzie's protest to the governor general, the colonial secretary replied that if the choice of recipients were controlled by the colonial government, party affiliation would be bound to override all other factors, and he stated flatly that the responsibility to advise the sovereign in these matters was his alone.

Preparing the honours lists each year troubled Prime Minister Sir Wilfrid LAURIER in his turn, and resulted occasionally in strained relations with the governor general. Honours was a touchy subject with members of Cabinet, and its frustration led to a renewed attempt to gain some control of the nominations process. In 1902 an order-in-council was passed which would require the governor general to seek the advice of the ministry about the annual honours lists, but the response from the Colonial Office was little different from the position taken 25 years earlier.

By 1911, when Sir Robert BORDEN became prime minister, titles in Canada were being viewed with growing public disfavour. A knighthood conferred on Max AITKEN, an expatriate Canadian who had been elected to the British Parliament, provoked widespread criticism. There were further shock waves a few years later when Sir Max Aitken, with the help of influential political friends, received in quick succession a baronetcy and then a peerage, and entered the House of Lords as Lord Beaverbrook. Abuses were becoming more frequent, and Canadian public opinion hardened with the announcement of some of Borden's candidates for titles during WWI.

End of Titular and Nontitular Honours

When the Union Government took office after the 1917 election, the matter came to a head. A parliamentary committee recommended and the House of Commons in 1919 adopted the "Nickle Resolution," which brought to an end the granting of both titular and nontitular honours to Canadians. There was a brief revival of the defunct honours policy during the Conservative administration of Prime Minister R.B. BENNETT, and several knighthoods and lesser distinctions were awarded 1934-35, but shortly after the Liberals were returned to office in 1935 the prohibition was reinstated. Consequently, at the outset of WWII Canadians in the armed services were not entitled to receive awards in the orders of chivalry for which other Commonwealth personnel were eligible.

A parliamentary committee appointed in 1943 recommended that the ban on nontitular honours be lifted, thus clearing the way for many members of the military and civilians to receive recognition for wartime services. A further recommendation, favouring the creation of a Canadian order, led to the establishment of the "Canada Medal," a single all-purpose national honour. An initial list of suggested recipients was drawn up but was rejected by the prime minister. Mackenzie KING had a deep distaste for the concept of honours, and on reflection he decided that instituting the Canada Medal had been a mistake. No award was ever made.

After the war the subject was kept alive, chiefly in military circles. In 1951 Vincent MASSEY, chairman of the Royal Commission on NATIONAL DEVELOPMENT IN THE ARTS, LETTERS, AND SCIENCES, was asked by Prime Minister Louis ST. LAURENT to include a report on the subject of honours. In response a draft scheme was submitted favouring the creation of an elaborate 5-tier Canadian order. The proposal came to nothing.

Fifteen years later the approaching centenary of Confederation brought the notion of national honours back into focus. Prime Minister Lester PEARSON seized the opportunity of the CENTENNIAL celebration to reinforce the theme of Confederation: the fruitful union of diverse elements in a vigorous and independent state. In 1965, in the face of loud and sometimes bitter opposition, he piloted a bill through Parliament giving Canada a national flag (see FLAG DEBATE). In the spring of 1967, not a dissenting voice was heard when he announced the creation of the ORDER OF CANADA. On 1 July 1967, the proposal made by Lord Monck a century before at last became a reality. Five years later the honours system was fleshed out with the addition of the ORDER OF MILITARY MERIT and a group of DECORATIONS FOR BRAVERY. The administration of honours is the responsibility of the Chancellory of Honours, Government House, Ottawa.