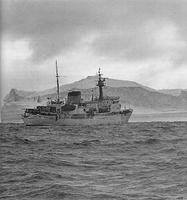 In 1970 the CSS Hudson completed the first circumnavigation of the Americas on the Hudson 70 expedition. The ship left Halifax in November 1969 and steamed south in the Atlantic to spend 2 months working in the Chilean fjords and south of Cape Horn. A south-to-north transect of the Pacific followed, with the ship arriving in Vancouver in June 1970. After periods of work off the Canadian West Coast and in the BEAUFORT SEA, the Hudson passed through the NORTHWEST PASSAGE to arrive back in Halifax in November 1970.

The expedition was undertaken to give scientists from Canada and other countries the opportunity to further their studies of the oceanography and biology of the South Atlantic, the Pacific and the Arctic. Over 120 scientific staff, including Cedric R. MANN, George L. PICKARD and William M. CAMERON, took part in the expedition and obtained a wealth of information. Highlights of the expedition were a comprehensive description of the oceanography and biology of the Chilean fjords, which was completed for comparison with the fjords of British Columbia and Norway; measurement of the strength of the Antarctic circumpolar current as it passes between South America and Antarctica; studies of the geophysical structure of the sea floor off western Canada, which were to be considerably expanded in the years to come; and the first complete description of the marine geology of the Beaufort Sea.