Like other major ice storms that have affected the Lake Ontario and St. Lawrence region, the storm resulted from a combination of low-pressure warm air currents from the Gulf of Mexico and high-pressure cold currents from the Arctic. When these two currents collided, the warm air rose above the cold; the precipitation consequently fell as rain but froze as it reached lower altitudes or hit the ground. 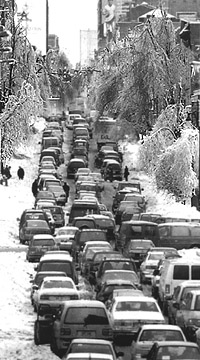 Throughout the storm and its immediate aftermath, approximately 2.6 million people — 19 per cent of all Canadian employees—were impeded or prevented from travelling to work. Though Kingston and Ottawa were hit hard, the majority of the affected workers were in Québec, which suffered the most severe economic costs of the storm. Small businesses and retailers were also severely impacted, as commercial activity ground to a halt in some communities.

Despite the short-term economic costs experienced by cities, communities outside of built-up urban zones were the ones most adversely impacted by the storm. The affected area was home to approximately one quarter of all Canadian dairy cows, whose owners faced major challenges when the electrical grid failed. Many cattle became sick, as it was impossible to feed or milk. Furthermore, because local processing plants were shut down, over 10 million litres of milk, valued at about $5 million, had to be discarded.

The maple syrup industry was also severely affected. More than one fifth of Canada’s syrup-producing tree taps were severely impacted by the storm. Countless tree branches and pipes used to channel maple sap collapsed under the weight of the ice, and some producers in Québec lost virtually their entire sugar bush. The industry’s losses in income were likely in the tens of millions of dollars for 1998 alone, and the storm’s damage was so extensive that many estimated it would take years or even decades for the industry to fully recover.

With several municipalities calling a state of emergency, the federal government deployed the Canadian Forces to provide shelter and medical care, as well as assistance with the restoration of the power grid. Over 15,000 personnel were deployed in total, making “Operation Recuperation” the largest peacetime deployment of troops in Canadian history.

Research conducted since the storm has raised the concern that there may be a connection between climate change and extreme weather events such as the ice storm.