In Conversation with Danielle Goyette

From 1991 to 2008, Danielle Goyette of Saint-Nazaire d’Acton, Québec, was an elite forward on the Canadian national women’s hockey team. During her brilliant hockey career, Goyette won two gold medals at the Olympic Winter Games and eight world championships. In October 2015, Goyette will be inducted into Canada’s Sports Hall of Fame. On 22 June 2015, she spoke to Jeremy Freeborn at her office at the University of Calgary, where she is the head coach of the University of Calgary Dinos women’s hockey team.

JF: Tell me about the first time you played hockey.

DG: The first time I played on a team I was 15. [But] I always played on the town’s outside rink from the ages of 4 to 15 every winter after school and on the weekends.

JF: Did you initially play with girls or did you have to play with boys?

DG: I always played with girls. Actually, at the time I started out, I was playing with women because [girls’] hockey wasn’t that popular. When I first started out, I had one teammate who was 40. The age difference was all over the place. Now it is fun today when you see the young girls play. There are all-girls pee wee teams [now]. We never had a chance to play on those teams.

JF: Who were your role models?

DG: You know, it’s funny. I never really had an athlete role model when I was younger. My parents were always my role models growing up. They showed me what it takes to be successful. They stressed the importance of hard work and education. When I started on the national women’s hockey team, one of my role models was my best friend, [short track speed skater] Sylvie Daigle. She helped me with my off-ice training. She coached me for a long time, even when I was on the national team. I really looked up to Sylvie.

JF: The women’s national hockey team did not exist when you were a teenager. Was there a particular team you dreamed of playing on?

DG: I am a big fan of the Montreal Canadiens. As a young girl, I watched them. I never missed a game on a Saturday night. That is how I learned to play hockey, by watching the Canadiens. After the game, I would take my stick and skates outside. It would be 10:30 at night and it was late. My parents would ask, ‘what are you doing?’ I would be going to the ice outside and trying to make the moves the Canadiens made during the game. Using a snowball for a puck, I practiced with the streetlight on. … I have followed the Canadiens ever since.

DG: In 1990, I had two bad shoulders. My doctor didn’t allow me to [try out] because at the time full-body contact in women’s hockey was allowed. My doctor said my shoulders would not hold up. It was really too bad and heartbreaking for me. At the end of the day, you have to follow the direction of your doctor. The year after, I did some rehabilitation for my shoulders and I made the national team.

JF: How meaningful was it for you to represent Canada at the 1992 Women’s World Hockey Championship in Finland and be the co-leader of the tournament in scoring?

DG: You know, it was pretty amazing. … It was the first time I was out of Canada. I remember the tournament like it was yesterday. You never forget your first experience.

It was difficult, too. Due to the fact that I didn’t speak English at the time, it was hard on me because I couldn’t communicate with my teammates. I had to play on a French line because my linemates [from Québec] were among the very few players I could talk to. I knew I missed so much by not being able to talk to my other teammates. I knew I had to learn English because that was a hard experience for me.

DG: That’s a good question. For me, every world championship was different. The first one you remember that experience because you don’t know what to expect. Everything is new. However, I would say my last world championship [Winnipeg 2007] was great. … Canada had just won the gold medal at the 2006 Olympic Winter Games in Turin. People were crazy. … It was a big party in Winnipeg. Those two World Championships [1992 and 2007] were special.

Every time I played a world championship in Canada it was special [Goyette also won the gold medal in 1997 in Kitchener, Ontario, in 2000 in Mississauga, Ontario, and in 2004 in Halifax, Nova Scotia]. I really wanted to keep going for the 2010 Olympic Winter Games in Vancouver because it was in Canada [Goyette retired in 2008].

JF:What were your biggest challenges during your hockey career?

DG: The language barrier was one of the greatest adversities I ever faced. From 1991 to 1996, I could not talk to my teammates on the national team. I only spoke French. When I found out in 1996 that women’s hockey was going to be in the 1998 Olympic Winter Games for the first time, I was 30 years old. I decided I needed to move to Calgary to train and learn English. In August of 1996, I moved to Calgary and found a job at the Olympic Oval. I trained twice a day. I thought I was going to be in Calgary for five months and I have been here for 20 years.

The other [challenge] was injuries. I dislocated my shoulders 24 times — 13 in my left shoulder, 11 in my right shoulder. I had three shoulder surgeries. My other serious injury problem was concussions. The last one was a big concussion. For two months, I could not watch television or be in a lighted room. It was scary. I could not keep a conversation with somebody or talk on the phone because I could not remember what was said five seconds ago. … I was lucky enough that I was able to keep going. You cannot take anything for granted.

JF: How did it feel to win the gold medal at the 2002 Olympic Winter Games in Salt Lake City?

DG: Prior to the 1998 Olympic Winter Games in Nagano, we were dominating women’s hockey, but we lost the gold medal, 3–1 to the United States in the final game. It was a hard lesson to learn. […] It doesn’t matter how successful you are before you get to the Olympics, anything can happen.

In 2002, it was pretty amazing. You think about the gold medal game against the United States — we had eight penalties in a row. People were so angry with the referee. However, every time we took a penalty, we gained confidence because the American team could not score. We stayed calm. It was [great] to see the reaction of my teammates on the bench and how they reacted to the penalties. Usually we would get frustrated, but we were calm. We trusted our teammates and when we won the gold medal it was an amazing feeling. It was the first gold medal for Canada in women’s hockey and to be a part of that was something special.

JF: What are your memories from the 2006 Olympic Winter Games in Turin?

DG: The 2006 Olympic Winter Games in Turin were special because I was the flag bearer for Canada in the opening ceremonies. As an athlete, it is something you do not train for. It is an honour to be able to carry the flag. Every time you walk into the stadium, you have so many athletes around you. However, when you walk by yourself with the flag in the stadium, and nobody is around you, you see a 360° picture in front of you. It was a moment I will never forget.

The Canadian team at the 2006 Olympic Winter Games in Turin was so easy to play for because we had a lot of experience. For many, they were playing in their third Olympics. Everybody knew their roles. It went seamlessly. We didn’t play the United States in the final. Sweden beat the United States in the semi-final. But at the same time, we had to be careful. Sweden had beaten the United States the game before, and they could win again. But we were ready to play that game. It was one of the most complete teams ever.

JF: What does it mean for you to be inducted into Canada’s Sports Hall of Fame?

DG: It’s pretty amazing. When you think about it, it is one of the highest honours you can have in Canada. As a young girl from Québec and growing up in Saint-Nazaire, I never dreamed about being inducted into Canada’s Sports Hall of Fame. When that happened, and I got a phone call, it was like, ‘Wow’. When you see all of those sports legends who have been inducted before me, it was amazing.

I met two 93-year-old ladies [Rhoda Eaves and Rhona Gillis] from Montréal who still alpine ski and are in great shape. I told them they were my new role models. That is the way I want to look if I live that long. For me it’s pretty special to be able to leave something behind for kids to be inspired. The fact that we have opened doors for young girls to be able to play hockey at the beginning of their career is something important.

Note: Twins Rhoda Wurtele (Eaves) and Rhona Wurtele (Gillis) were members of Canada’s first alpine women’s ski team in 1942 and represented Canada at the 1948 Olympic Winter Games in St. Moritz. On 17 June 2015 they were inducted as part of the Canadian Sports Legends Class at Canada’s Sports Hall of Fame.

JF: What would you tell young girls who dream of being high performance women hockey players?

DG: Follow your dream. We still have people in society who say ‘young girls should not play hockey’. If it is something you want, anything is possible. There is this belief that a family needs a lot of money for the children to play hockey. That is not true. I came from a family that had little money. My parents had two jobs each. If you have a dream, and you are willing to do what it takes to get there, anything is possible.

JF: What are your future goals?

DG: I am coaching the University of Calgary [women’s team] right now. I want to make this program better year after year, be one of the top programs in the country. If I chance to work with the national team at the 2018 Olympic Winter Games in Pyeongchang, I would love to do that. I take life day by day, and make the best out of it. 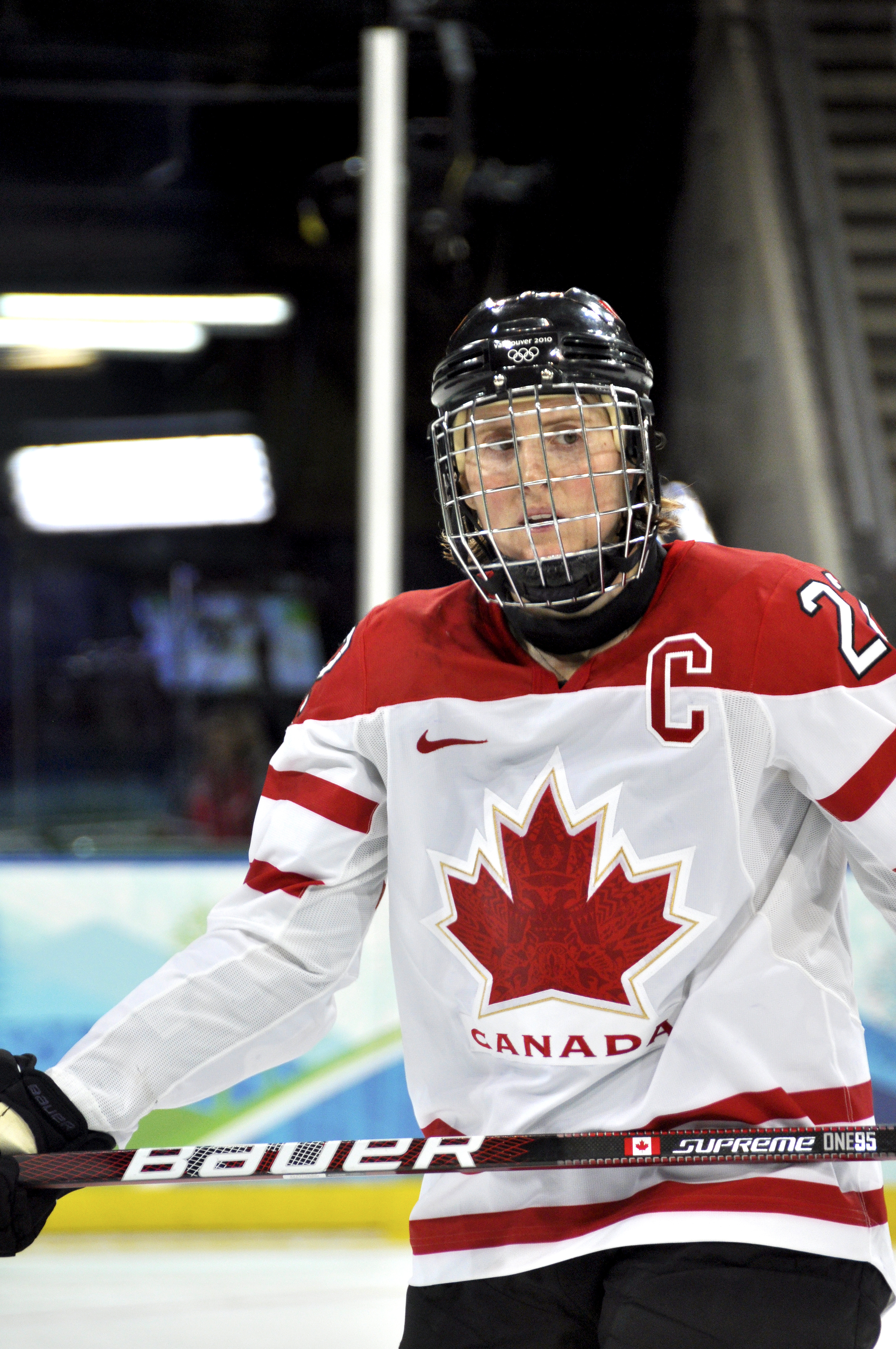 In Conversation with Hayley Wickenheiser