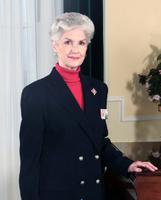 Iona Campagnolo, broadcaster, politician, lieutenant-governor of BC (b at Galiano I, BC 18 Oct 1932). Iona Campagnolo grew up near Prince Rupert, where she began her career as a radio broadcaster. In 1966 she was elected as a school trustee and served as chairman of the school board for six years. She was elected an alderman in 1972. Two years later she ran successfully as a Liberal in the federal riding of Skeena. Campagnolo was named parliamentary secretary to the minister of Indian affairs and northern development in October 1975 and joined the cabinet of Pierre Trudeau in 1976 as minister of state for fitness and amateur sport. Despite her defeat in the 1979 general election, she remained active in politics and in 1982 was elected the first woman president of the national Liberal Party, an office she held until 1986.

Iona Campagnolo has also had a career as a broadcaster and activist. Beyond Canada, she frequently contributed to current affairs programs on PBS-TV and monitored elections and did human rights work in Africa, Asia and South America. She has been a director of such non-governmental organizations as the North-South Institute, the Southern Africa Education Trust, Project Angola and the International Centre for Human Rights and Democratic Development. Within Canada she was elected the first chancellor of the University of Northern British Columbia in 1992 and served a six-year term. She chaired the Fraser Basin Council, an organization committed to the environmental sustainability of the Fraser River, from its inception in 1997 until her appointment as lieutenant-governor and served as a director of the Arctic Institute of North America until 2001.

Among Iona Campagnolo's many honours are honorary doctorates from the University of Northern British Columbia, Simon Fraser University and Brock University; the Order of British Columbia (1998); and 2 aboriginal names: Notz-whe-Neah or "Mother of the Big Fin" and Saan-naag-Kaawaass or "Person who Sits High," from the Tsimpsean and Haida nations, respectively. Earlier in her political career, she was made a Member of the Order of Canada (1973). She was installed as the 27th lieutenant-governor on 25 September 2001. During her 6 years as lieutenant-governor, she was a popular visitor to all parts of the province and a gracious hostess at Government House. On 1 October 2007, she was succeeded by Stephen Point. She moved to her home in Comox, BC, with plans to continue to work to promote human rights and other causes.