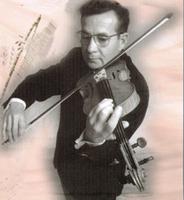 Carignan was the leading exponent of the Celtic tradition in French Canadian fiddling (courtesy National Library of Canada). The music is Reel de Lévis a traditional Québec reel (courtesy CBC).

Jean or 'Ti-Jean' Carignan. Violoneux, b Lévis, near Quebec City, 7 Dec 1916, d Delson, near Montreal, 16 Feb 1988; honorary D MUS (McGill) 1977, honorary D MUS (Toronto) 1977. His father, a mason also was a violoneux. At 4 Carignan began playing and at 5 he was performing on street corners in Lévis. At first he learned his father's repertoire of traditional tunes, and at 7 heard a recording of Joseph Allard, and after the family moved to Montreal he studied 1927-31 with Allard and began to learn the recorded repertoires of the Irish fiddler Michael Coleman and the Scotsman J. Scott Skinner. He continued to perform in the streets but was harassed by the police and at 11 or 12 became a shoemakers's apprentice.

In his mid-teens Carignan joined George Wade and his Toronto oldtime band, the Cornhuskers. He played violin and occasionally clarinet and saxophone for about five years and participated in the Cornhuskers Victor recordings. Returning to Montreal he led a small dance band at the St-André Dance Hall until 1954 and intermittently worked in factories. He then played for two years with Bob Hill's dance band in the Montreal area. In 1956, having chosen to perform only in concert and at folk festivals, he became a taxi driver, which he remained for 20 years

Carignan's performing association with Alan Mills took him to the 1960 Newport Folk Festival and to the earliest of the Mariposa Folk Festivals, at which he continued to perform regularly until 1977. He appeared at many other festivals in North America and in Europe. In 1960 he performed with Mills at Carnegie Hall. The film Jean Carignan violoneux was produced by the NFB in 1975. In the later years Gilles Losier (b Tracadie, NB, 1936) became his accompanist. He was a pianist and fiddler who had studied at the Halifax School for the Blind and had been active in both traditional and pop (rock) music. At the Théâtre Maisonneuve (PDA) in 1976, Carignan led an orchestra (which included his twin brothers Marcel and Rodolphe, also violoneux) in Veillée québécoise, a program of traditional songs and dances. In 1976 André Gagnon composed the Petit Concerto pour Carignan et orchestre, a work for two soloists - a violoneux and a classically trained violinist - that draws a witty analogy between the traditional style of the great country fiddler and the violin writing of Vivaldi or Bach. Carignan and Yehudi Menuhin were the soloists in a performance of the work in an episode of the CBC series 'The Music of Man', televised in 1979. In 1978 Carignan played for Suite Carignan, a ballet based on his music, scored by Donald Patriquin, choreographed by Brian Macdonald, and danced by Les Grands Ballets Canadiens. Increasing deafness forced his retirement from music. He told Nathalie Petrowski: 'I am deaf because I live in Quebec and I was obliged to earn my living, working in a shop with machines and power hammers'.

Acclaimed by folklorists and fellow violinists (from Louis 'Pitou' Boudreault to Yehudi Menuhin and Szeryng), Carignan has been the leading exponent of the Celtic traditions (especially of Coleman's so-called Sligo style) in French-Canadian fiddling. He adopted an uncompromising approach to his repertoire of some 7000 reels, jigs, and other dance tunes learned from Coleman, Skinner, Allard, Wellie Ringuette, and many others and strove for strict authenticity in his performances. According to The Folk Music Sourcebook (New York 1976), 'Carignan's technique is amazing, but more so the joy and energy with which he applies it. There are few players in any music who reach his degree of virtuosity without sacrificing feeling or orginality'. In 1973 400 fiddlers from the USA and Canada gathered at Ascot Corner, south of Montreal, in tribute to Carignan, and a wooden bust by the sculptor Georges Morisette was unveiled. Carignan was named a Member of the Order of Canada in 1974 and was awarded the 1976 Prix de musique Calixa-Lavallée.