Jim Egan was the eldest son of James Egan and Nellie (Josephine) Engle; Jim’s only sibling, Charles, was born in 1922. Jim attended Holy Name School and later the Eastern High School of Commerce, in Toronto. In high school, he took a mixed science course of biology, chemistry and physics, as well as English literature and composition. He proved to be an indifferent student, though, and abandoned formal education in the second year of high school. Always attracted to the natural world, Egan spent the years 1937–39 working on farms near Bailieboro, Ontario. He tried to enlist after the declaration of war in September 1939, but was rejected due to a corneal scar (see Second World War).

Although Jim did not graduate from high school, he was a self-taught person who pored over books and magazines on biology and the natural world. As able-bodied men signed up to go to war, many employment opportunities became available for others. Through his interest in biology and his farming experience, Egan was able to secure employment as a departmental technician at the Department of Zoology, University of Toronto (see Zoology). Egan later worked in the insulin production department of Connaught Laboratories (now Sanofi Pasteur Limited) and in the tissue culture lab. He helped with typhus, polio and cancer research under the direction of Dr. Raymond Parker, a key figure in the search for a polio vaccine. 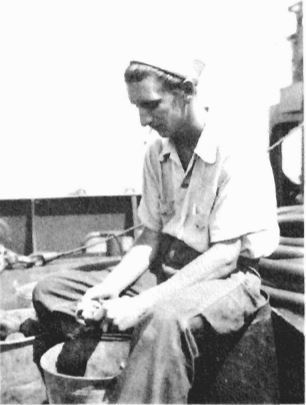 Jim Egan peeling potatoes in the merchant navy, circa 1943.

In 1943, Egan successfully enlisted in the merchant navy as an ordinary seaman and served until 1947. He worked on several ships, travelling in the Mediterranean and the South Seas. During and after the war he came into contact for the first time with a “gay world,” including bars and clubs in cities such as London and Hamburg.

Back in Toronto after the war, Egan met John (Jack) Norris Nesbit (1927–2000) in 1948; they soon entered a committed relationship and remained partners until Jim’s death in 2000.

Egan’s laboratory experience led him to establish a series of biological supply businesses beginning in 1949 and continuing off and on into the 1970s. 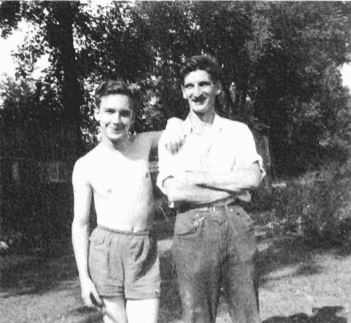 Egan’s serious reading interests extended to the gay icons of the day — André Gide, Walt Whitman, Oscar Wilde — and the works of pioneering sexuality researchers such as Havelock Ellis.

The publication of Alfred Kinsey’s Sexual Behavior in the Human Male (1948) was a great inspiration to him. Egan began to study homosexuality in greater depth and, beginning in 1949, his letters to local newspapers such as the Globe and Mail, Toronto Daily Star and Toronto Telegram protested misleading or sensational reports on homosexuality and he defended it as a natural orientation. This was a brave stance, 20 years before homosexuality was decriminalized in Canada, and Egan first used a pseudonym when signing letters or articles, then his initials, J.L.E. (Much later, he used his own name.)

At the beginning of the 1950s, it was not unusual for newspapers, and particularly the tabloids, to use sensational headlines when covering the LGBTQ2 community. The headline “Queers Flushed from ‘Love’ Nest” degraded same-sex couples; “’Pansies’ Bloom in Cocktail Bar” suggested that openly gay people were abnormal and should not be allowed to drink at respectable bars. Egan fought back against such slurs.

“I simply let [the press] know that there was at least one person out there who was not going to sit by and let them get away with what I considered to be gross inaccuracies and libels.”

During 1949 and 1951, Egan expanded his letter-writing campaign to mainstream American mass-market magazines such as Coronet, Ladies’ Home Journal, Parents’ Magazine and Redbook, but they didn’t publish his letters. He also attempted to sell story ideas to them that depicted homosexuality in an honest and straightforward fashion, but was unsuccessful. 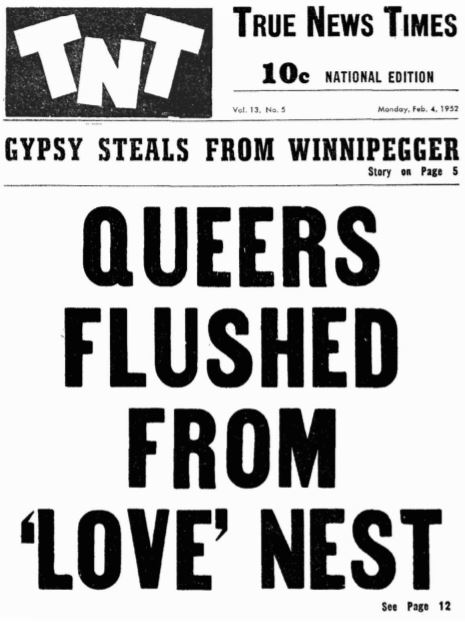 Egan also began to correspond with like-minded individuals. Beginning in 1951, he had a brief correspondence with Henry Gerber (1892–1972), founder in Chicago in 1924 of the Society for Human Rights, the earliest gay rights organization in the United States, and editor of Friendship and Freedom, the earliest known American gay magazine. By 1953, Egan was corresponding with members of the Mattachine Society in Los Angeles, formed in 1950 as an American gay rights organization.

“In October 1950, a letter of mine was published for the first time in True News Times. TNT published a ridiculous gay gossip or tidbit column written by someone who called himself Masque. My letter complained about some of the stupid, nasty remarks that appeared there. These gay columns were filled with innuendo, such as ‘What well-known bartender had been out with what well-known queen?’ I never approved of this kind of gay trivia.” — Jim Egan in his memoir, Challenging the Conspiracy of Silence (1998), published by the Canadian Lesbian and Gay Archives.

Egan’s first real success in writing came in November–December 1951, when his seven-part series “Aspects of Homosexuality” was published in the Toronto tabloid True News Times (TNT). No longer just writing letters of complaint, Egan now had a platform to publish overviews of same-sex desire through history, legal and scientific aspects of homosexuality, and the need for more tolerance — all of which was heavily influenced by his reading. Egan intended to counter what he considered outright lies and distortions in the press, and to challenge what he called “the conspiracy of silence” surrounding the truth about homosexuality. This represented a key moment in the history of gay journalism in Canada: the first published long articles written from a gay point of view.

Egan used his experience with TNT to expand to a larger publication. He persuaded Philip Daniels, publisher of the Toronto tabloid Justice Weekly, to publish “Homosexual Concepts,” signed J.L.E., a 12-part series of articles from December 1953 to February 1954. This was followed by an untitled series, in 15 parts, published between March and June 1954. In Justice Weekly, Egan expanded his scope, including insights into debates on the “cause” and “cure” of homosexuality, as well as reports on current events, such as the ongoing purge, led by Senator Joseph McCarthy, of hundreds of United States government employees because of their sexuality.

When Egan stopped writing for Justice Weekly, he suggested that Daniels contact foreign gay publications to inquire about reprinting material in return for an exchange subscription. Daniels did so, resulting in the reprinting of more than 200 articles of interest to the gay community from publications such as ONE Magazine and Mattachine Review, beginning in 1954 and extending into the 1960s. These articles in Justice Weekly were an important source of information for gay Canadians before the foundation of a gay press in Canada in 1964.

Between 1955 and 1963, Jim and Jack took up farming in rural Ontario, and for a time ran a pet and garden supply store in Beamsville, Ontario. During this period, Jim’s gay activism declined, though Jim and Jack participated in the fifth Midwinter Institute of ONE, Inc., in Los Angeles, in 1959, where they met many leading activists, including Dr. Blanche Baker, Dr. Evelyn Hooker, Jim Kepner and W. Dorr Legg. Inspired by these contacts, Jim published two articles in ONE Magazine during 1959, and revived his letter-writing campaign to newspapers and magazines.

Back in Toronto in 1963, Jim served as a resource person and tour guide to journalist Sidney Katz, whose two-part series “The Homosexual Next Door: A Sober Appraisal of a New Social Phenomenon” was published in Maclean’s magazine in February and March 1964. These are considered to be the first full-scale articles published in a mainstream Canadian magazine to take a generally positive view of homosexuality. The Homosexual Next Door was reprinted in booklet form by the Mattachine Society in 1965.

In 1964, Egan and Nesbit’s relationship came under strain due to Jim’s increasingly public activism. Jack was a private person and did not want to draw attention to his sexual orientation. Jim’s involvement with “The Homosexual Next Door” was apparently too high profile, in Jack’s estimation. After a brief split, Jack persuaded Jim to move to British Columbia to start a new life together. They started a marine biological specimen company that operated until 1972. Over the years, they moved around Vancouver Island, eventually settling in Courtenay. Although they were not involved in gay activism during their early days in British Columbia, Jack’s level of comfort with gay activism gradually strengthened and in 1985 they co-founded the Comox Valley branch of the Island Gay Society. Egan was also a supporter of AIDS awareness, and served as the president of the North Island AIDS Coalition in 1994.

Egan’s interest in the natural world propelled him to become involved with environmental activism in British Columbia, particularly with groups such as the Society for the Prevention of Environmental Collapse and the Save Our Straits Committee. His desire to make a difference through public service ultimately led to politics. In 1981, Egan was elected a regional director for Electoral Area B of the Regional District of Comox-Strathcona. He was one of the first openly gay politicians to serve in Canada; Egan was re-elected twice, and served from 1981 to 1993, when he decided not to stand for re-election.

In 1987, Egan and Nesbit applied on Nesbit’s behalf for the spousal allowance benefit provided under the Old Age Security Act. Egan and Nesbit had been a couple for almost 40 years and met all criteria for the benefit. Health and Welfare Canada’s denial of the claim based on sexual orientation (they were a same-sex couple) set the stage for a court challenge test case under the Canadian Charter of Rights and Freedoms. Their case, entered in 1988 in the Trial Division of the Federal Court of Canada, claimed discrimination under the Old Age Security Act in its definition of “spouse,” claiming that the current definition discriminated against same-sex couples on the basis of gender and sexual orientation, contrary to section 15(1) of the Charter. The Federal Court dismissed their claim in 1991, stating that their relationship was “not a spousal one.” They appealed the ruling to the Federal Court of Appeal, which in 1993 upheld the ruling of the lower court (see Court System of Canada). They filed an application to appeal to the Supreme Court of Canada, which was accepted.

In May 1995, the Supreme Court ruled on Egan v. Canada, and dismissed the appeal. At the same time, it ruled that “sexual orientation” is in the Charter as a ground of discrimination, thus providing protection from discrimination based on sexual orientation (see LGBTQ2 Rights in Canada). The decision has been described as “losing the battle but winning the war.” Because of the Egan decision, laws across the country that discriminated on the basis of sexual orientation in all areas of life (e.g., employment, government benefits, income tax, family law) became ripe for challenge.

As an openly gay man, Jim Egan is recognized as a pioneering Canadian gay journalist who challenged discrimination and bigotry against LGBTQ2 people. His columns in True News Times and Justice Weekly exposed readers to a gay viewpoint on historical and current affairs. Egan’s support of foreign gay publishers resulted in republication of selected works in Justice Weekly, thus greatly increasing access to gay content for Canadian readers. Egan and Nesbit’s bravery in undertaking the challenge to the spousal allowance benefit under the Old Age Security Act, and the subsequent Egan v. Canada case, was their most consequential legacy. The case led to the ruling that “sexual orientation” be read into the Canadian Charter of Rights and Freedoms as a protected ground of discrimination — a monumental finding in support of LGBTQ2 rights in Canada. The landmark decision opened the door to other activists and set a precedent that paved the way to other milestone victories, including same-sex marriage.