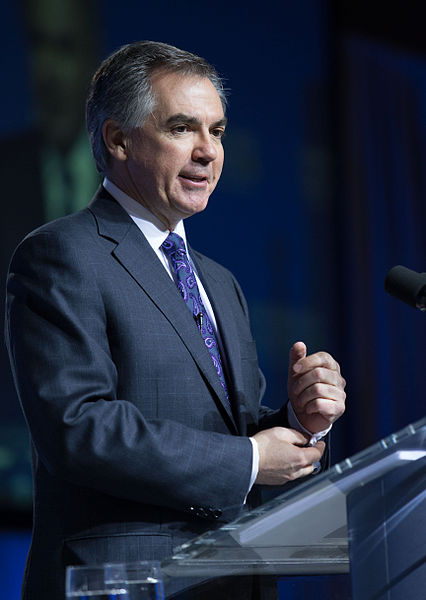 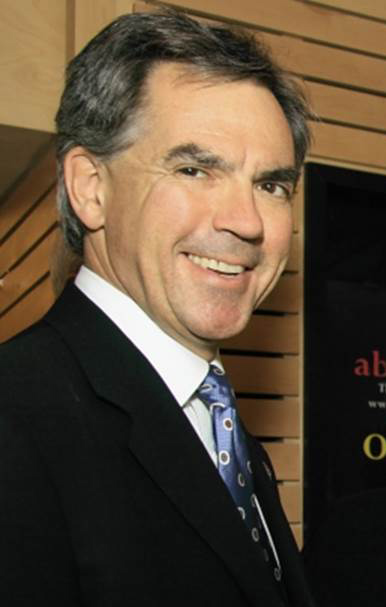 Jim Prentice, 16th Premier of Alberta and leader of the Progressive Conservative Party of Alberta (2014–15), Federal Cabinet minister (2006–10), lawyer (born 20 July 1956 in South Porcupine, ON; died 13 October 2016 near Kelowna, BC). A lawyer with a background in Indigenous land claims, Jim Prentice served in Stephen Harper’s Cabinet, with portfolios in Aboriginal Affairs and Northern Development; Industry; and Environment. From 2011 to 2014, he held a senior position with CIBC, before returning to politics to become Premier of Alberta. He resigned from provincial politics in 2015 after his party lost its majority to the Alberta New Democratic Party, ending 44 years of rule by the Progressive Conservatives.

Prentice was born in South Porcupine, ON, a small town about 10 km east of Timmins. He was one of five children born to Eric and Wilma Prentice. His father, Eric, played a very brief stint with the Toronto Maple Leafs during the 1943–44 season and was the youngest player ever signed by the club. His uncle, Dean Prentice, had a 22-year career in the league. Prentice was a very good hockey player himself, but a serious knee injury in junior hockey ended any future ambitions in the sport.

When Prentice was 13 years old his family moved to Grande Cache, AB. He later earned a Bachelor of Commerce degree from the University of Alberta and, subsequently, a law degree from Dalhousie University in Halifax. He paid his way through school by working in the coal mines of southern Alberta.

Prentice’s professional career as a lawyer began in 1980. He specialized in property rights law and on Aboriginal land claims; from 1993 to 2000 he served as co-chair of the Indian Claims Commission of Canada, which mediated property claims between First Nations and the federal government.

Prentice’s first involvement in politics was confined mostly to behind-the-scenes party work for the Progressive Conservative Party of Alberta. He ran provincially for the party in 1986 but failed to win the riding of Calgary–Mountain View.

In 2002, Prentice won the federal nomination for the Progressive Conservative (PC) Party in the riding of Calgary Southwest, but in a much-celebrated move he withdrew from the race to clear a path for Stephen Harper, the new leader of the Canadian Alliance party. This allowed Harper an easy path to the House of Commons as the standard-bearer of the political right.

In 2003, Prentice ran for the leadership of the federal PC Party following the resignation of Joe Clark. Prentice lost the race on the final ballot to Peter MacKay. Shortly after, MacKay and Harper agreed to a merger of the Progressive Conservative Party with the Canadian Alliance party. In December 2003, Prentice launched a brief attempt to contest the leadership of the newly-formed Conservative Party, but soon withdrew due to a lack of funding.

Prentice won election to the House of Commons in 2004, representing the riding of Calgary Centre-North, and became the opposition critic for Indian and Northern Affairs. He was re-elected in 2006 and 2008.

The 2006 electoral victory of Stephen Harper’s Conservatives meant the beginning of a career in Cabinet for Prentice. He held three portfolios between 2006 and 2010: Indian Affairs and Northern Development; Industry; and Environment.

Prentice served as Minister of Indian Affairs and Northern Development from 6 February 2006 to 13 August 2007. Aboriginal leaders criticized Prentice and the Harper government for not honouring the Kelowna Accord, a multi-billion dollar funding agreement that had been negotiated between the federal government (under Paul Martin), provincial and territorial governments, and five Aboriginal organizations. In response, Prentice argued that the Conservative government’s 2006 budget had allocated more funds for Aboriginal issues than the previous four budgets combined.

As Minister of Indian Affairs and Northern Development, Prentice earned praise for his role in finalizing and implementing the Indian Residential Schools Settlement Agreement.

As Minister of Industry from 14 August 2007 to 29 October 2008, Prentice blocked the $1.3-billion sale of a Canadian company and attempted to change copyright legislation.

In May 2008, Prentice announced the Harper government was blocking a proposed takeover of the space-technology division of Vancouver-based MacDonald, Dettwiler and Associates (MDA) by American firm Alliant Techsystems (ATK) because it provided no “net benefit” to Canada. This was the first time a minister had blocked a foreign takeover since the Investment Canada Act of 1985.

By acquiring MDA, the American firm would have gained technology developed through the support of Canadian taxpayers; critics also worried about Canada’s ability to control information provided by the Radarsat-2 satellite, which the country uses to monitor the Arctic.

Prentice also tackled copyright legislation while Minister of Industry. Among other provisions, the controversial Bill C-61, An Act To Amend the Copyright Act, would have made it illegal to circumvent the digital locks on copyrighted material. Critics argued that the legislation was designed to satisfy American interests and worried about exposing Canadians to million-dollar lawsuits. The bill died on the order paper when Parliament was dissolved and an election called in 2008. A similar bill, C-11, The Copyright Modernization Act, was passed in 2012.

Minister of the Environment

Prentice’s last role in the Harper government was as Minister of the Environment, a post he held from 30 October 2008 until his resignation from the Cabinet on 4 November 2010. His tenure in this portfolio was noted for conservationism. Two days before his resignation, he announced that a coppermine development in British Columbia could not proceed due to the projected environmental effects on Fish Lake — the government’s decision was welcomed by the localTsilhqot’in National Government, which had opposed the development. Prentice also expanded Canada’s National Parks system and worked with the United States to address environmental issues such as vehicle emissions and carbon capture and storage.

However, during Prentice’s tenure as Environment Minister, the Conservative government was criticized for its approach to environmental issues (a criticism that continued after his resignation). At a climate change conference in Copenhagen in 2009, Canada was named “Fossil of the Year” by a coalition of environmental groups, which charged that it was the “absolute worst country at the talks.” In 2010, the Conservative government also changed key regulations regarding environmental assessments, in order to “streamline the regulatory review process for large energy projects”; critics charged that this had effectively gutted the environmental review process.

In general, though, Prentice was widely praised as an effective and capable cabinet minister. One government insider wrote that he was “among the most solid of ministers.” Others referred to him as the government’s “Chief Operating Officer”. In an editorial after he stepped down, The Globe and Mail wrote:

“An expert in Indian law and a former land claims commissioner, Mr. Prentice was a key player in the Conservative Party's outreach to aboriginal peoples. And throughout his time in office, he eschewed the partisanship that many of his colleagues engaged in.”

Despite his success as a cabinet minister and being touted as a possible successor to Harper, Prentice resigned on 4 November 2010 to take a job as vice-chairman and senior executive vice-president with the Canadian Imperial Bank of Commerce (CIBC).

In January 2011, Prentice joined CIBC, where he increased the bank’s profile in energy infrastructure, responsible resource development, and the Asia Pacific Rim.

In the spring of 2014, he was asked by the energy company Enbridge to help lead negotiations with First Nations in Alberta and British Columbia for building the Northern Gateway Pipeline. Prentice said at the time that, "There will be no oil pipelines to the West Coast without economic partnerships with First Nations."

Prentice did not get to spend much time on the file as on 21 May 2014 he announced he would run for the leadership of the Progressive Conservative Party of Alberta.

On 23 March 2014, Alberta Premier Alison Redford resigned amid spending scandals surrounding her travel expenses and perceived lavish lifestyle. Dave Hancock served as premier until a leadership convention could be held.

“As a province and a people, we are justifiably proud of our history,” Prentice noted at his swearing in ceremony. “But the job of building Alberta is not yet done. It is our privilege — and our responsibility — to define what comes next. Today, Alberta is under new management.”

Prentice moved quickly to scrap an unpopular bill aimed at reforming public- and private-sector pension plans and cancelled a much-maligned redesign of the province’s license plates. He also put the government’s fleet of jets up for sale.

While Prentice was premier by virtue of his swearing in, he did not yet have a seat in the Legislative Assembly of Alberta. To remedy this, Prentice ran in a by-election, and on 27 October 2014, won the riding of Calgary Foothills with 58.2 per cent of the popular vote. Although observers believed Prentice and the PC party would suffer at the polls due to the scandals of the Redford regime, the party won four by-elections that evening — a significant setback for Prentice’s main rival, Wildrose Party leader Danielle Smith.

Alberta’s fixed-date election law meant Prentice and his Progressive Conservative government would face voters in a 2016 provincial election. However, the premier called an early election in spring 2015, which many believed would give Prentice his own mandate. Yet lost jobs and revenues in the oil industry, coupled with anger at government policies — including a "bad news budget" unveiled shortly before the election — eroded support for Prentice and the Progressive Conservative Party, which had been in power for 44 years.

In the provincial election of 5 May 2015, Prentice won his seat in the riding of Calgary-Foothills, but the party lost its majority to the New Democratic Party, led by Rachel Notley. The Progressive Conservatives finished third in the election, while the Wildrose Party became the Official Opposition. Prentice announced his resignation as party leader and MLA that evening, effective immediately.

In January 2016, Prentice became a Visiting Global Fellow at the Wilson Center’s Canada Institute in Washington, DC. In June, he began working with Warburg Pincus, a private equity firm, as an industry advisor in its Energy Group. Prentice died in a plane crash near Kelowna, British Columbia, on 13 October 2016, leaving behind his wife, Karen, and their three daughters.