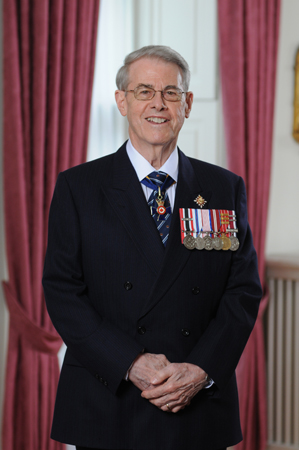 John James Grant is the son of the late George Grant, a former mayor of New Glasgow. Grant attended Mount Allison University, where he graduated in 1956 with a Bachelor of Commerce degree in accounting and economics. In 1967, John became a fully registered industrial accountant.

In 1951, Grant joined the Pictou Highlanders Pipes and Drums. In 1953, he transferred to the Mount Allison University Contingent, Canadian Officers Training Corps. Two years later (1955), he was commissioned as a 2nd Lieutenant. He served the third phase of the Canadian Officers Trainings Corps with the Canadian Infantry Brigade Group in Germany. In 1957, he transferred to the 1st Battalion, Nova Scotia Highlanders, where he eventually served as Commanding Officer (1970–72).

In 1984, Grant became the Senior Reserve Advisor to Commander FMC (Force Mobile Command). From 1985 to 1987, he was Chief of Staff Reserves for the Army FMC and on Reserve Council at National Defence Headquarters. In 1987, he was appointed Special Projects Officer on the Chief of Reserves Council at National Defence Headquarters. Grant retired from the Militia, Canadian Force, in 1989.

Grant became a Governor of the Nova Scotia Division of the Canadian Corps of Commissionaires in 1986. He served on the National Board as a member of the National Executive, completing 25 of service on the board in January 2011.

Grant was invested as an Officer in the Order of Military Merit (OMM) in 1979 and as a Commander in the Order in 1988 (CMM). He has also been awarded the Canadian Forces Decoration (CD) with three clasps (2000). In 2019, Grant was named to the Order of Canada.