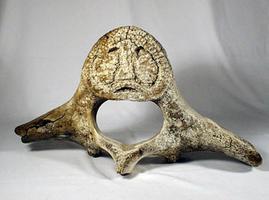 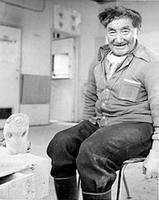 Having moved inland to hunt in the Barren Lands, he almost died during "the great starvation" of the 1950s. He eventually moved via Baker Lake to Rankin Inlet, where he took up carving in the early 1960s, as well as working in clay in 1964. Like the work of his great friend John Tiktak, Kavik's work is primary and stark, but is also filled with narrative content. This is particularly evident in his totally original pots, which are covered with 3-dimensional protruding figures full of humour and folklore.