The significance of the Cretaceous fossil resources was realized during the "Great Canadian Dinosaur Rush" (1911-1925), when more than 300 skeletons found their way into the displays of museums around the World. After a long period of inactivity, a renaissance of interest in dinosaurs led to the establishment in 1985 of the Royal Tyrrell Museum of Palaeontology in the badlands at Drumheller.

The Alberta badlands have long been one of the richest dinosaur-producing areas in the world, and continue to produce half a dozen new skeletons every year, some of which represent new species. But intensive, multidisciplinary studies have also revealed new aspects of dinosaurian biology. Some bone beds are the remnants of mass deaths of herds of duckbilled and horned dinosaurs, migrating seasonally between Alberta and Alaska. Eggs and nests have been recovered from sites in southern Alberta that probably represent communal nesting grounds. Dinosaur trackway sites in Alberta and British Columbia have produced thousands of footprints and an incredible amount of data on how dinosaurs moved and interacted. As studies become more sophisticated, palaeontologists are revealing aspects of dinosaur physiology, variation, and behaviour. Extinction theories abound, but the evidence is favouring an asteroid hitting the Earth 65 million years ago. But did they really die out? It is now widely accepted that more than 8000 species are alive today. We call them birds.

Coal was a strategic resource and its discovery was paramount for the success of the railway and expansion of Canada. Thus, Geological Survey of Canada explorers such as Dawson, Weston, Tyrrell, McConnell, and Macoun all were in the west for economic reasons. More important than the dinosaurs were the other fossils they discovered. These were the only means they had of determining the age of the rocks they were mapping.

While exploring for coal in 1884, Tyrrell made the first discovery of a dinosaur in the Red Deer River Valley. This was a skull of Albertosaurus. It was his most famous fossil collection, but nearly as important were the many invertebrate fossils he collected. These were invaluable in the interpretation of the geology of western Canada

Today, Alberta's geography ranges from mountains to rolling foothills to miles of prairie. During the latter part of the Devonian Period, a shallow sea covered the region. Reefs formed and all kinds of animals and plants lived here. When the water retreated, the reef dwellers died. Over tens of millions of years, water levels continued to change; new reefs formed while the plants and animals that lived on other reefs died. This series of events was the first step in the creation of one of Alberta's key industries: oil and gas.

In 1947, Imperial Oil Limited drilled an oil well into Devonian-age rocks and hit a "gusher" that would go down in history. In commemoration of that landmark event, Imperial Oil Charitable Foundation is a proud sponsor of the Tyrrell's Devonian Reef exhibit.

Alberta was once a dinosaur paradise. A warm-temperate climate meant lush vegetation that was perfect for herbivores, and herds of herbivores meant ample prey for the carnivores. Many bones from these animals were buried, and then fossilized. When the Ice Ages ended, the layers of rock that covered these fossils were washed away - revealing one of the best deposits of late Cretaceous dinosaur fossils found anywhere in the world.

Every summer, crews from the Tyrrell Museum hunt for new fossils to add to our collection. After almost 20 years of fieldwork, we have close to 40 dinosaur skeletons on display that you can admire up close, and more than 110 000 specimens in our collection.

Samuel de Champlain and the Founding of Quebec 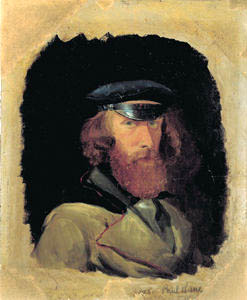 The Adventurous Paintings of Paul Kane