Jason D. Harrow, rapper, music producer (born 12 May 1976 in Scarborough, ON). Dubbed “the best-kept secret in Canadian hip hop” by Billboard magazine, Kardinal Offishall played a central role in bringing Canadian hip hop from the underground to the mainstream in the late 1990s and early 2000s. An energetic and boisterous live performer, he is known for his wit and social conscience, reggae and dancehall influences and a lyrical delivery often peppered with Jamaican patois. A prolific producer who has recorded and performed with some of the biggest names in hip hop, he is an international ambassador for both Toronto and Canadian hip hop, and has won multiple Juno and SOCAN Awards. 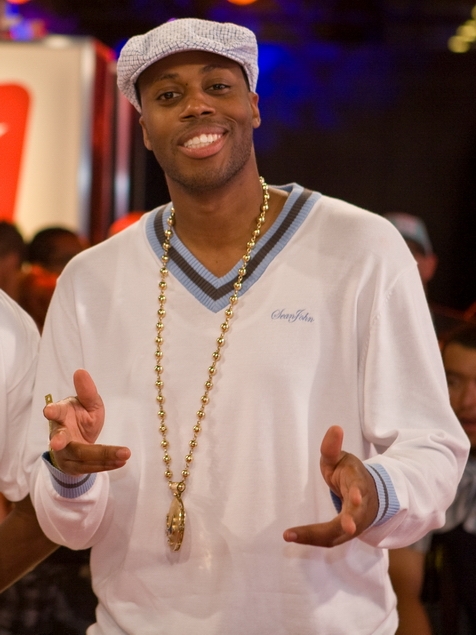 The son of Jamaican immigrants, Jason Harrow spent his childhood in the Flemingdon Park area of Toronto, and his teen years in the city’s Oakwood-Vaughan neighbourhood. His interest in music was spurred by the music collection of his father, a DJ, and nurtured by his mother, a teacher and community organizer, who encouraged him to write his first hip hop rhyme at age 10. He began performing at age 12, and adopted the stage name Kool Aid at 13. When he was 14, he won a competition to compose an anti-drug song and earned an opportunity to meet Canadian hip hop pioneer Maestro Fresh Wes.

Harrow formed a group with friends and began to perform at Toronto-area malls and community centres. He also performed for Nelson Mandela on his Canadian visit in 1990, shortly after his release from prison in South Africa. In 1993, Harrow participated in the Fresh Arts program, funded by Jobs for Ontario Youth (JOY), through which he met many collaborators and colleagues including singer Jully Black, hip hop musician Saukrates and video director Little X (now Director X). Encouraged to take the idea of being a recording artist seriously, Harrow and a number of his fellow Fresh Arts participants formed the influential Toronto hip-hop collective Figurez ov Speech.

Around this time, Harrow changed his stage name to Kardinal Offishall. Kardinal is a reference to the French statesman Cardinal Richelieu; Offishall is a pun both on the word “official” and on Harrow’s tendency to “go off” in his live shows (“Off-I-Shall”). As an independent hip hop scene emerged in Toronto, Figurez ov Speech gained notoriety, particularly through the early recordings of Saukrates. The collective soon joined forces with Choclair, an MC that Saukrates was producing, and formed the 12-member hip hop collective The Circle.

One day at school, Offishall had a song he couldn’t get out of his head. He skipped class, went to the studio and recorded the Bob Marley-sampling “Naughty Dread.” As Offishall’s first single, the song was included on the landmark compilation album Rap Essentials Volume 1 (1996) and earned a Juno nomination for Best Rap Recording. Meanwhile, Offishall was emerging as a charismatic figure in the newly expanded Circle collective, which was building a solid local following for their live shows.

In 1997, Offishall released his self-produced debut album Eye and I and scored a minor hit with “On Wit Da Show,” which received significant rotation on MuchMusic. He dropped out of York University, where he was studying mass communications, to focus solely on his recording career. In 1998, he was featured in the Rascalz’s groundbreaking hit single “Northern Touch,” which earned him a share of the 1999 Juno Award for Best Rap Recording.

After the release of his Juno-nominated EP Husslin’ (1999), Offishall signed a deal with MCA Records. He also produced the Juno-winning single “Let’s Ride” from Circle member Choclair’s major label debut, and produced and appeared on Maestro Fresh Wes’ “Bustin’ Loose” (2000).

Offishall’s major label debut, Quest for Fire: Firestarter Vol. 1 (2001), featured the lead single “Bakardi Slang,” which articulated the West Indian presence in Toronto. It became his first Top 20 Canadian hit as a solo artist, and his first single to chart on Billboard’s Hot Rap Tracks, cracking the Top 40. Offishall boosted his international profile by recording a remix of the song with Jamaican dancehall superstar Bounty Killer. The album’s second single, “Ol’ Time Killin’,” was a Top 40 hit in Canada, and was remixed by Offishall and hip hop superstar Busta Rhymes. Quest for Fire: Firestarter Vol. 1 was nominated for Best Rap Recording at the 2002 Juno Awards.

Offishall began collaborating with such prominent artists and producers as Timbaland, Missy Elliott and Pharrell Williams; the latter featured Offishall on the remix to the Clipse’s underground hit “Grindin’.’” Williams also produced Offishall’s “Belly Dancer,” which was slated to be the first single on his next album. However, Offishall’s label, MCA Records, was in the process of being absorbed into Geffen Records, and the album was never released. Offishall was initially retained by Geffen, but he became frustrated by the artistic directions he was asked to take and eventually left. 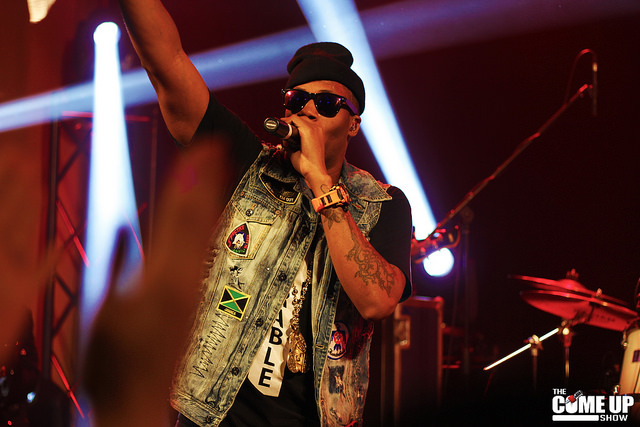 Offishall made an acting appearance in the Canadian film Love, Sex and Eating the Bones (2003), but remained focused on succeeding in music as a free agent. Leveraging his relationships and artistic credibility, he collaborated with numerous artists across dancehall, hip-hop and pop genres, including Canadian R&B singer Glenn Lewis and Scottish pop group Texas. He also issued several independent mixtapes, including the Tarantino-inspired Kill Bloodclott Bill Vol. 1 (2004). “Bang Bang,” a single from the mixtape, was nominated for Best Rap Recording at the 2005 Junos.

Offishall performed with Jay-Z at Toronto’s Caribana festival in 2005 and appeared on Rihanna’s debut album Music of the Sun (2005). Offishall’s third album, Fire and Glory (2005), was released through Virgin Canada and earned a Juno nomination for Best Rap Recording. The hit single “Everyday (Rudebwoy)” hit No. 16 in Canada and won three MuchMusic Video Awards. After the awards show, Kardinal vowed to never attend the Junos again, because of what he perceived as hip hop’s low profile at the event.

Offishall then signed with Kon Live, run by Senegalese-born singer Akon. After releasing more mixtape material and doing further cameo appearances, including a remix of Lady Gaga’s “Just Dance,” Offishall released the Not 4 Sale album in 2008. The lead single “Dangerous” was an immediate hit in Canada and abroad, becoming the first song by a Canadian hip-hop artist to crack the American Billboard Hot 100 Chart, peaking at No. 5. It reached No. 2 on the Canadian Hot 100 Chart, achieved triple-platinum certification in Canada and was a top 10 single in various European countries. The song’s video on YouTube has more than 60 million views, and counting.

Offishall won Juno Awards for Rap Recording (Not 4 Sale) and Single of the Year (“Dangerous”). The album also yielded the hit single “Set It Off,” a collaboration with the Clipse, which prompted superstar producer Dr. Dre to emerge from a lengthy hiatus to add his own rhyme to an Internet-leaked version of the song. The single “Numba 1 (Tide Is High)” sampled Blondie’s “Tide Is High” in its chorus and featured Rihanna on the album version. The single version featuring Keri Hilson was a Top 40 hit in Canada. 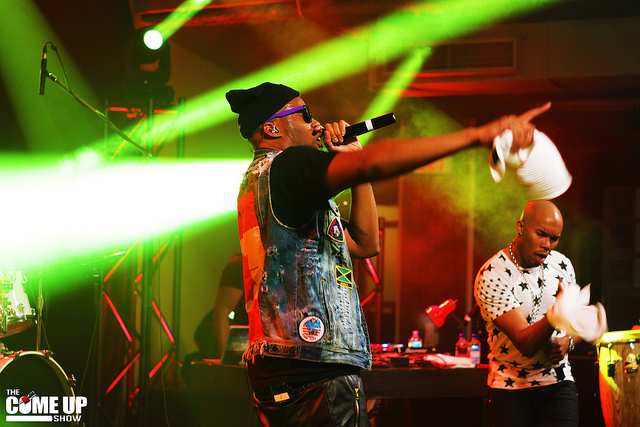 In late 2010, Offishall served as a torchbearer for the 2010 Winter Olympic Games in Vancouver and released “The Anthem,” a tribute to Toronto that in many ways was a cosmopolitan update to his earlier “Bakardi Slang.” The video for the song prominently displayed local landmarks and celebrities (e.g., George Stroumboulopoulos, Russell Peters) as well as the various neighbourhoods and the nightlife of Toronto.

In 2011, Offishall appeared at the CBC Hip-Hop Summit, celebrating 25 years of Canadian hip hop. In 2012, after parting ways with Akon’s Kon Live label, he released a free collaborative mixtape with producer Nottz entitled A.M.T.R.I.M. (Allow Me to Re-Introduce Myself) that he described as one of his most personal and introspective projects to date. The release of his long-gestating album reportedly titled Mr. International was put in further doubt in December 2013, when it was announced that Offishall had accepted the position of Creative Executive Director of A&R (artists and repertoire) at Universal Music Canada.

In 2010, Offishall was one of dozens of Canadian artists to contribute to a remix of K'Naan’s “Wavin’ Flag,” which raised more than $1 million for victims of the earthquake in Haiti. In late 2013, after the death of Nelson Mandela, Offishall spoke at a school in Toronto and revealed he had named his son Dela after the late South African leader.