The Labradormiut are direct descendants of the prehistoric Thule, who expanded east towards the Canadian Arctic from Alaska around 1000 CE. Following the migration of whales and harp seals, early Labrador Inuit travelled southward along the Labrador coastline to the Strait of Belle Isle. Some even travelled as far south as the Gulf of St. Lawrence. Although they settled further south than most other Inuit groups, the Labrador Inuit share a common language and cultural heritage with Inuit in the circumpolar regions of Canada, Alaska, Greenland and the northeastern coast of Siberia. 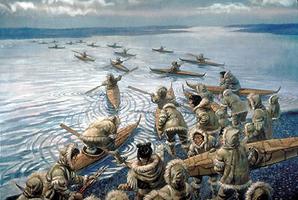 Traditionally, the early Inuit derived most of their livelihood from the sea. While coastal waters remained unfrozen (from mid-June to mid-December), the men hunted walrus, beluga and seal from their kayaks. In late autumn, they hunted the bowhead whale from their open skin-covered umiaks. During winter, they hunted seals near the ice edge. Large winter houses made of sod, stone, timber and whalebones were usually shared by several families.

The Labrador Inuit made contact with European missionaries, explorers, fishermen and whalers in Southern Labrador by the late 16th century. Basque whale hunters from Spain operated outposts in Southern Labrador, where they processed whale oil for export during ice-free seasons, from summer until late fall. In the winter, Inuit visited abandoned whaling stations to search for metal tools and other goods left behind by Europeans. The Inuit distributed such items northward along the coast through an inter-group trade network.

After Basque whaling activities ended around the 1620s, French fishermen occupied old coastal stations and built new ones in the Strait of Belle Isle during the 17th and 18th centuries. Afraid of the Inuit, the French rarely traded with them. This led to Inuit-led raids on isolated stations and counter-attacks against Inuit by French fishermen.

After Britain acquired Labrador in 1763, fishermen from Britain and New England took over former French outposts. Although relationships between the British and Inuit were initially hostile — due to frequent misunderstandings and subsequent conflicts — intermittent trade between the two groups was well established during this period. The Inuit had obtained a wide variety of European goods, including wooden sailing boats, in exchange for their baleen (horny plates in the jaws of certain whales), sealskins and blubber. Until they obtained firearms in the 1780s, the Labrador Inuit tried to avoid contact with their sometimes hostile Indigenous neighbours, the Innu, who had been armed earlier by French fur traders.

Protestant missionaries of the German-based Moravian Church were the first Europeans to make a more permanent presence along the coast of Labrador, north of Hamilton Inlet, during the 1760s. Moravians began converting Inuit to Christianity and provided them with European goods at mission stations. These mission stations brought about an end to the closely related band style of exchanging goods that characterized the Inuit trade network as there was no longer a need for journeys to Southern Labrador for goods. The Hudson’s Bay Company was transferred all trading operations in 1926 after several years of financial trouble by the Moravians.

The British Government supported the Moravian Church by awarding it extensive grants of land on the northern coast which became the foundation for communities based at Nain, Okak, Hopedale and Hebron. After Newfoundland joined Confederation in 1949, services that were originally provided by Moravian missions, and later the Hudson’s Bay Company, became the responsibility of provincial and federal government agencies.

Over time, the continued presence of Europeans altered Inuit nomadic and communal lifestyle, and the Inuit became more connected to the emerging trade economy of Labrador. Europeans also brought with them contagious diseases, which decimated many Inuit groups who migrated south. Survivors were largely absorbed through intermarriage with European settlers.

In 1973, the Labrador Inuit Association (LIA) was formed to promote Inuit health and communities, and advance Labrador Inuit claims with Canada and Newfoundland. In 1977, the LIA filed a claim with the Government of Canada for rights to land and sea in Northern Labrador. After 17 years of negotiations, the Inuit land claims were settled in 1997. In addition to self-governance, the agreement provided the Labrador Inuit with: surface title to 16,000 km2 of land; harvesting rights and shared rights to approximately 44,000 km2; and a percentage of the Voisey Bay project.

Today, the traditional territory of the Labrador Inuit is called Nunatsiavut, which means "our beautiful land" in Inuttitut (an Inuktitut dialect). In 2005, the Nunatsiavut Government was established as a regional government within the province of Newfoundland and Labrador. After official elections to the newly-created Nunatsiavut Assembly were held in 2006, Nunatsiavut became the first Inuit region in Canada to achieve self-government.

After the Second World War, some Inuit moved to the inland communities of Happy Valley and North West River. During federal government relocation projects in the 1950s, many Inuit also moved to Nain. As a result of these migrations, there are no longer any permanent Inuit settlements on the coast north of Nain. Nevertheless, many people still travel north from Nain each summer to fish for arctic char, a source of earned income for the modern Labrador Inuit. Most Labrador Inuit now live in Nain, Hopedale and Makkovik, settlements founded by Moravian missionaries in 1771, 1782 and 1896, respectively.