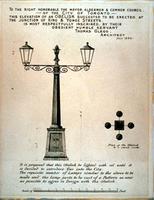 Kerosene provided, for the first time, an inexpensive and abundant supply of a safe fuel that could make good lighting available to the general public, such as in this Argand Kerosene Lamp (courtesy New Brunswick Museum).
PreviousNext

From earliest times it has been recognized that artificial light prolongs daytime activities. Relaxation and social interaction necessarily occurred after the day's work was done; therefore, indoor lighting has always had a special association with this aspect of living. The campfire moved indoors to become the fireplace, and from this main source of light a branch could be pulled out and placed in a wrought-iron holder to illuminate other areas, or carried outside to serve as a torch. Small pieces of wood held in a clamp or splint holder would burn for a short period of time. The open flame continued to be the only source of domestic lighting until the incandescent light bulb was introduced in the 1880s. Although the most primitive forms are still in everyday use in some areas, it is possible to view the evolution of lighting as having 3 distinct periods.

During the first period, which ended in about 1780, fats and oils from animal and vegetable sources were used with various types of wicking. In some cases, dried whole animals or fish fastened to a stick served as torches; for example, in BC, oily smelts, popularly known as candlefish, were used in this manner. The earliest lamps were simple covered or uncovered saucers with a wick lying along the bottom and extending to the rim; examples include Roman pottery lamps, European iron crusies, Inuit stone lamps and perhaps shells. Slight improvements, such as a channel or tube to elevate the wick, were incorporated in European spout lamps and in Betty, Kettle and cup-shaped lamps.

A peeled rush, dipped in melted fat, provided a primitive form of candle. Rushlights were rarely used in Canada, but candles were a part of Canadian life from the earliest times of European settlement. The self-supporting column containing a cotton wick was commonly made of tallow during pioneer times. Tallow was superseded by paraffin in the 1860s. Candle production has been maintained because of the visual and psychological association of warmth and romance with the flickering flame. Animal fats were readily available in most households and were used for lamp fuel and in soapmaking as well as for candles.

The second period, beginning about 1780, was one of invention and discovery. Lamps and burners were created for new fuels, such as artificial gas, burning fluid, rosin oil and kerosene, as well as for old fuels such as whale oil and lard. Glass was the most common material, although brass and other metals were popular. The Swiss scientist Aimé Argand is credited with the first significant invention of this period, the Argand lamp. His centre-draft burner, holding a tubular wick and using a glass chimney, is recognized as the beginning of modern lighting. Such chimneys, being fragile and requiring daily washing, were a staple product of the Canadian glasshouses.

Artificial gas, introduced about 1800, required special burners and, more importantly, a distribution and installation system. This innovation took many years to accomplish, and in North America artificial gas was available only in major cities and towns. In Montréal, Québec City and Toronto, distribution of artificial gas began in the late 1830s and the 1840s, primarily to supply public buildings and the homes of the affluent, as well as some street lighting (see coal gasification).

During the entire second period, the shape of lamps reflected inventions tailored to the characteristics of the fuels used and to the manufacturing technology available, particularly in the glass industry, as well as to the influences of contemporary fashion. From 1830 to 1860, the most common illuminants used in North America were animal fats, burning fluid made from camphene (pine oil), and redistilled alcohol. Burning fluid (known as camphine in England), although inexpensive, was highly volatile and resulted in numerous fatal explosions.

Simple whale-oil burners usually had one or 2 vertical wick tubes extending into the fuel container (font). Burning-fluid burners, although similar, did not extend into the font and had single or multiple, divergent wick tubes, with removable wick caps used to extinguish the flame and to prevent evaporation. Whale oil was also used in more complicated lamps such as the Astral or Simumbra lamps, which had ring-shaped reservoirs that permitted unobstructed light to be cast downward. Lamps with offset fonts and separate reservoirs (the most popular being the kerosene student lamps) were used during the entire second period. Lard lamps featured various arrangements designed to force the fuel to the wick and to conduct heat from the flame to the fuel to keep it melted. In the 1850s the solar lamp, designed for use with lard or whale oil, was the most sophisticated lard lamp in both operation and appearance.

Mechanical lamps employed a clockwork mechanism to force highly viscous fuels to the top of the lamp. These were popular in Europe, where they were used with Colza (rapeseed) oil (see canola). Another type of mechanical lamp popular during the kerosene period used a fan to maintain a continuous flow of air between the wick tube and the draft deflector of the burner. Chimneys were not required with these lamps. Wanzer mechanical lamps were made in Hamilton, Ont, from 1886 to 1900 by the Wanzer Lamp Co.

In 1846 Abraham Gesner, a physician and geologist from NS, gave the first public demonstration of a revolutionary lighting fuel in Charlottetown, PEI. Kerosene was the name Gesner gave this product in his 1854 US patent. It was obtained initially from coal and later from petroleum. A similar product called Paraffine oil was patented in England in 1850 and in the US in 1852 by James Young from Scotland. These developments, as well as Samuel Kier's contemporary experiments in Pennsylvania, had little effect upon domestic lighting until the late 1850s.

Kerosene provided, for the first time, an inexpensive and abundant supply of a safe fuel that could make good lighting available to the general public. It was this dream that sparked the rush to discover and market petroleum, and it was James Miller Williams of Hamilton who, in 1857, first shipped crude oil from hand-dug wells at Oil Springs, near Petrolia, Ont. American and Canadian patents for kerosene burners and lamps continued long after electric lighting was introduced. In the 1880s a mantle that dramatically increased the intensity of light and could be used with gas or kerosene burners was invented by Karl Auer von Welsbach, an Austrian chemist.

The Paris World Fair of 1878 introduced the new mode of electric lighting to the world. Montréaler J.A.I. Craig was impressed by the demonstration, and upon his return helped the Jesuits install the first electric light in the city (based on the arc lamp invention of Russian engineer Pavel Jablochkov) in front of the Jesuit college on Bleury St. American inventor Thomas Alva Edison produced the first successful incandescent electric light bulb in late 1879, and his activities in organizing electric-power generation and electric-power transmission systems ushered in the third period of lighting.

In Canada, although all cities, towns and villages are served by electric power, domestic lighting in remote areas is still provided by lamps using naphtha gas, propane or kerosene. As electric lights become available, all other illuminants will likely be discontinued. However, for those who still derive great pleasure and satisfaction from the psychological attraction, the magic of the open flame will endure.

Oil (vegetable or animal), gas and kerosene lamps were used extensively for street lighting in North America before electric lamps were introduced. The brilliant carbon-arc lamps invented by Sir Humphry Davy in 1808 were used primarily for large indoor areas and outdoors for streetlights, searchlights and lighthouses. Oil-fueled streetlights were used in Montréal, Québec City and Toronto until replaced by gaslights (1837-47), which were in turn replaced by electric lights.

Horse-drawn vehicles, trains, bicycles, motorcycles, cars and boats had special lighting requirements. To guide the traveller, candles, kerosene, whale oil and carbide lamps were used before battery-powered electric lights. In Ontario, Thomas Leopold Willson demonstrated Hamilton's first carbon-arc lamp in the 1880s. Soon after this he went to the US, where he discovered a method of producing calcium carbide. This substance was used in vehicle lamps, particularly for bicycles and motorcycles, as well as in lighthouses and in miners' lamps. A controlled trickle of water, combined with the calcium chloride, produced a continuous supply of acetylene gas that was conducted to a special burner. There was also limited domestic use for table lamps and for central systems, similar to artificial gas. These lamps had worldwide use but, in Canada as elsewhere, have been superseded for transportation purposes by electric lighting, powered by batteries or generators.