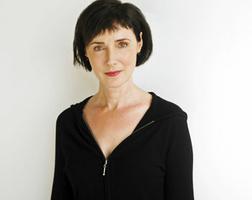 Linda Griffiths is one of Canada's most renowned theatre artists, winning multiple awards for her work (photo by Tim Leyes, courtesy of Linda Griffiths).

Linda Pauline Griffiths, actress, producer, writer (born 7 October 1953 in Montréal, QC; died 21 September 2014 in Toronto, ON). Since her expulsion from the National Theatre School of Canada in 1976, Griffiths was one of Canada's most renowned female theatre artists, winning multiple awards for her work. She graduated from Dawson College (CEGEP) in 1974 with a general arts diploma and obtained a one-year teaching diploma (no longer offered) from McGill University in 1975. But it was through working with theatre professionals in Collective Creation that Griffiths obtained her basic training and developed her unique approach to theatrical production; working collaboratively or alone she frequently wrote, produced and acted in the same show.

Griffiths was a founding member of 25th Street Theatre in Saskatoon and one of the original cast members in its collective creation, Paper Wheat (1978), which toured sold-out houses across Canada. A year later, she performed in another collective creation, Les Maudits Anglais, in Montréal, under the direction of future co-writer, Paul Thompson.

Griffiths's first major success came when she and Thompson collaborated to write Maggie and Pierre, a one-person, three-character play that bases its narrative structure on events in Pierre and Margaret Trudeau's life together. The first production of Maggie and Pierre was in 1980, with Griffiths playing Pierre Trudeau, Margaret Trudeau and a journalist called Henry. Maggie and Pierre toured Canada, played the Royal Alexandra Theatre in Toronto, and off-Broadway at the Phoenix Theatre.

Age of Arousal (2007), set in 1885 London, has been widely produced in Canada and the US, including a run at the Shaw Festival. A solo show, The Last Dog of War, directed by Daniel MacIvor, opened at Alberta Theatre Projects in October 2010. Recent projects include a full-length drama, Games to be Played with Caution.

An accomplished stage actress, Griffiths also made her mark in the arena of cinema. In 1983 she played the title role in John Sayles' Lianna, for which she won a Los Angeles' A.G.A. award. She followed this performance with another leading role in the 1984 film Reno and the Doc, an action-adventure directed by Charles Dennis. She appeared in many TV movies and made numerous guest appearances on such shows as Katts and Dog, Traders, Street Legal and Due South.

Griffiths started her own company, Duchess Productions (1997), which produced the tour of Alien Creature and developed and associate-produced The Duchess. In addition to her plays, Griffiths wrote fiction and poetry. In 1999, an anthology of her work, Sheer Nerve: Seven Plays by Linda Griffiths, was produced by Blizzard Press.