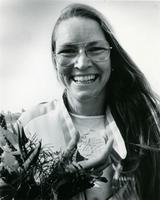 Gold medallist shooter Linda Thom at the 1984 Los Angeles Olympics. Thom had retired from the sport in the 1970s, but when the IOC announced in 1982 that Ladies Pistol Shooting would be a medal event she felt a renewed desire to compete (courtesy Canada's Sports Hall of Fame, www.sportshall.ca).

Linda Thom, shooter (b at Hamilton, Ont 30 Dec 1943). At age 8, Linda Thom's father, a competitive shooter, introduced her to shooting with a BB gun. As a youngster, she practised on targets such as matchboxes floating on pools of water. She made her competitive mark in 1970 at the world championships at Phoenix, Arizona, where she placed in the top 10 of the three events she entered. Although she continued to maintain her shooting skills, she decided to take a break from competition and to pursue many outside interests and became a chef. When it was announced in 1982 that Ladies Pistol Shooting would be an event at the 1984 Olympics, Linda Thom felt a renewed desire to compete. Prior to the Games, she finished first in the Swiss International pistol tournament and third in the West German International in 1984, and then won a gold medal in the ladies sport pistol at the 1984 Los Angeles Olympics. Thom's win also marked the first gold medal by a Canadian since 1968 and the first female gold-medallist since 1928. Linda Thom became a Member of the Order of Canada in 1985 and retired from the sport in 1987. In 1992, Linda Thom was elected to the Canadian Sports Hall of Fame.