Montcalm, like British Commander James Wolfe, was killed at the Battle of the Plains of Abraham in 1759.
(courtesy Library and Archives Canada/C-27665)

Louis-Joseph de Montcalm was born at the Château de Candiac, in Languedoc, France on 28 February 1712, to a family of the lesser nobility, with a tradition of military service dating back to the 17th century. He began his own military career at the age of nine, when his parents purchased him a training position in the Hainaut regiment. He was promoted to the rank of captain in that regiment at age 17.

Did you know?
In that era, officers’ positions in The French army could be bought and sold, a practice known as venality of offices.


In that era, officers’ positions in The French army could be bought and sold, a practice known as venality of offices.

Louis-Joseph de Montcalm received his baptism of fire in 1732. During the War of Polish Succession (1733–-1738), he served in the Rhineland in the army of Marshal de Saxe, a brilliant strategist. In 1736, between campaigns, Montcalm married Angélique-Louise Talon de Boulay, the heiress of another old and powerful family of the nobility of the robe. They had 10 children, only five of whom survived to adulthood.

At the outbreak of the War of Austrian Succession (1740–-1748), Montcalm was appointed aide-de-camp to Lieutenant General Philippe-Charles de la Fare. In 1741, Montcalm participated in the French assault on the walls of Prague. In the following year, he was wounded in the Austrian counter-attack. Two years later, he became colonel of the Auxerrois regiment, and he fought in Italy until the end of the war. At age 31, he was badly wounded at Plaisance, taking five sabre blows to the head and shoulders. His regiment was wiped out, and he was taken prisoner. Upon his release, he tenaciously rejoined the army to take part in the Battle of Assietta, in the Italian Alps, where he received a bullet wound to the forehead.

In 1752, Montcalm requested and received a pension from the king. He had an impressive service record: 31 years in the army, during which he had fought in 11 campaigns and been wounded five times. He retired to his Château de Candiac and was leading a peaceful life and seeing to his children’s education when the spectre of a new war arose.

In 1755, Montcalm was staying at Versailles when he was asked to take command of the French forces in North America, which had already engaged in major confrontations with the British. The 44-year-old veteran was appointed to the rank of maréchal de camp (general). He accepted this commission reluctantly: he did not desire it for himself, but the large salary that it would pay would secure his son’s future. He was also promised a pension on his return, of which his wife would receive half if he were killed in the line of duty.

In May 1756, General Montcalm arrived at Québec City, where he spent a few days to inform himself about “a country and a war in which everything is so different from what is practiced in Europe.” He then went to Montreal to meet with his superior, the Governor of New France, Pierre de  Rigaud, Marquis de  Vaudreuil. Rigaud commanded the land forces sent from France to defend New France (about 5000 troops in all), as well as the Troupes de la Marine (about 2000 men) and the Canadian militia (about 10,000). Montcalm’s responsibility would be to lead the land campaigns in accordance with the governor’s plans.

In June 1756, France declared war on the United Kingdom, marking the start of the Seven Years’ War (1756–-1763). That August, Montcalm captured the British Fort Oswego with a small army of 3000 men transported by 200 vessels. He owed his victory to a feat of logistics. Aboard those same vessels he had also transported powerful artillery: 33 cannon, including eight weighing over a tonne each and firing 12-pound projectiles. The following year, he captured Fort William Henry after a one-week siege. With these two victories, General Montcalm had succeeded where his predecessor, Baron Dieskau, had failed.

On 8 July 1758, Montcalm achieved a daring victory at Fort Carillon, where his 3500 soldiers defeated 15,000 men under General Abercrombie. On Montcalm’s return to Quebec City, Montcalm was hailed as a hero and promoted to lieutenant general, thus becoming commander in chief of the French armies in New France.

Montcalm’s promotion made him almost equal in rank to Governor Pierre de Rigaud de Vaudreuil, with whom his relations were tense, but he still had to consider the governor’s views before taking action. In the summer of 1759, Quebec City was attacked by a British expeditionary force led by General James Wolfe. The 10,000 British soldiers formed a small but powerful army. On his side, Montcalm had about 13,000 men — a larger force, but composed mainly of militiamen (armed civilians) and about 1,200 Indigenous warriors. The two generals now faced a showdown.

In the months before the British arrived, Montcalm had prepared the city for siege. He built a series of retrenchments, redoubts and batteries of cannon blocking access to the fortified city, behind which he dug in his army. On 31 July, the British troops tested these defences and suffered a major defeat at the Battle of Montmorency. 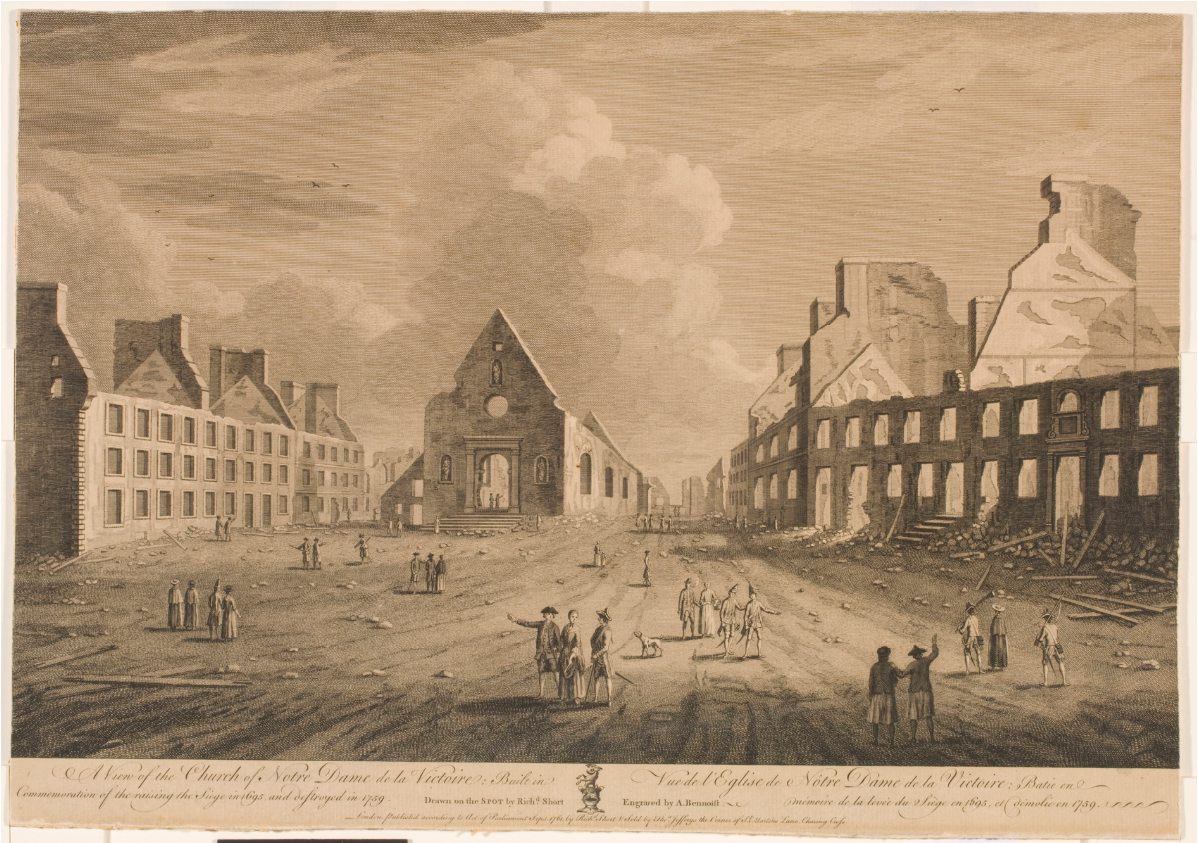 From July to September 1759, Wolfe bombarded Quebec City from the south shore, causing major damage to its cathedral (Notre-Dame de Québec), as well as to the Collège des Jésuites, the Château Saint-Louis, and the church of Notre-Dame-des-Victoires, while destroying many buildings in the city’s Lower Town. After two months of fruitless siege, the British finally managed to surprise the French by making a night landing at Anse-au-Foulon, then climbing to a position atop the Plains of Abraham. In the morning, Montcalm came out to meet them. The two armies faced off with about 4500 men on either side. 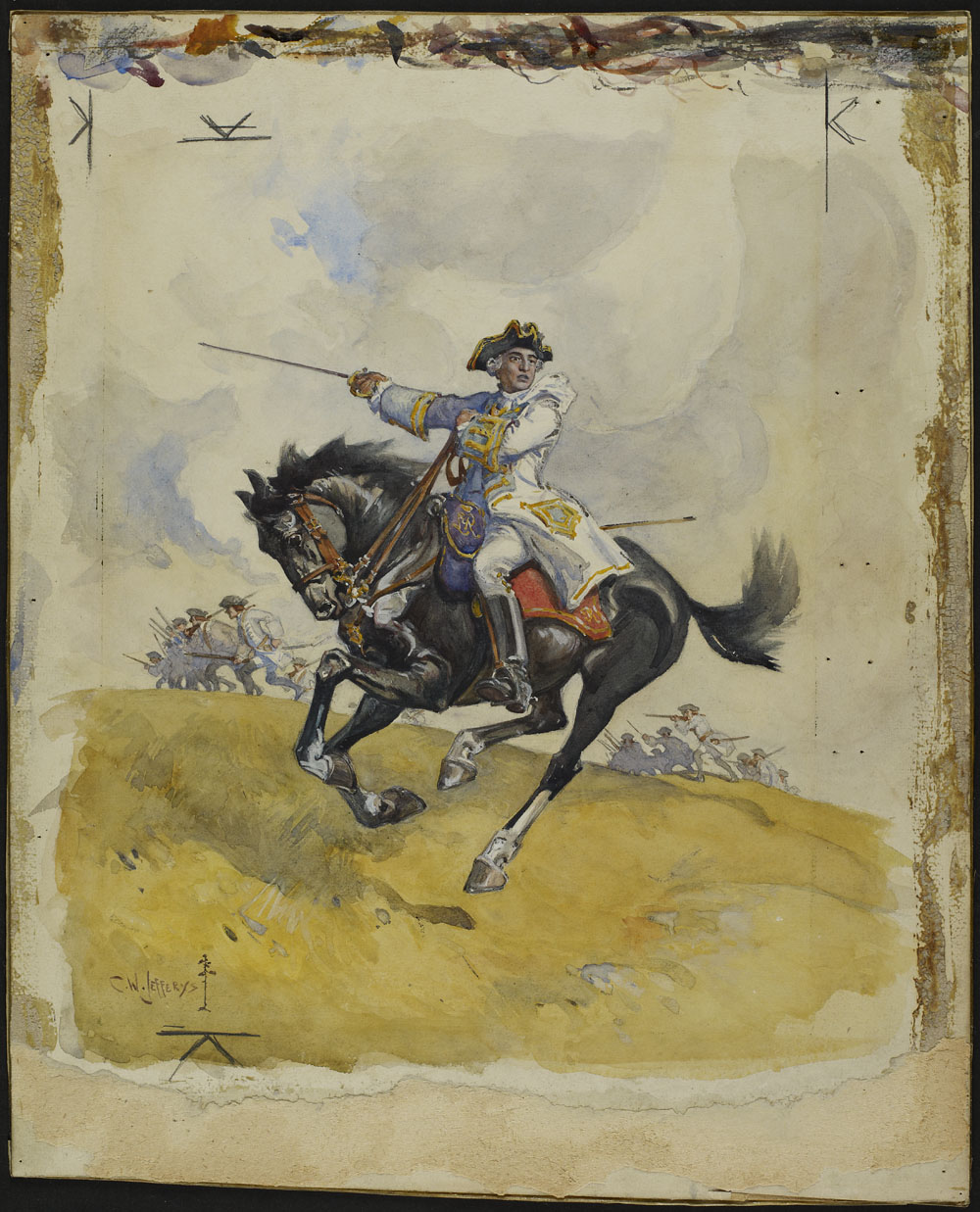 Montcalm leading his troops on the Plains of Abraham.

So as not to give the enemy time to dig in any further, Montcalm went on the offensive, hoping to overwhelm his adversary. When the French came within about 40 metres of the British line, they halted and opened fire. But the British return fire was devastating, because they had loaded their muskets with two balls each, instead of just one. On the French side, disorder quickly turned Iinto a rout. During this retreat, Montcalm suffered a mortal wound to the abdomen. He was carried into the city to the surgery of Dr. Arnoux, from which he gave his last orders. Meanwhile, Wolfe had been struck by three balls during the French assault and died on the field of battle. 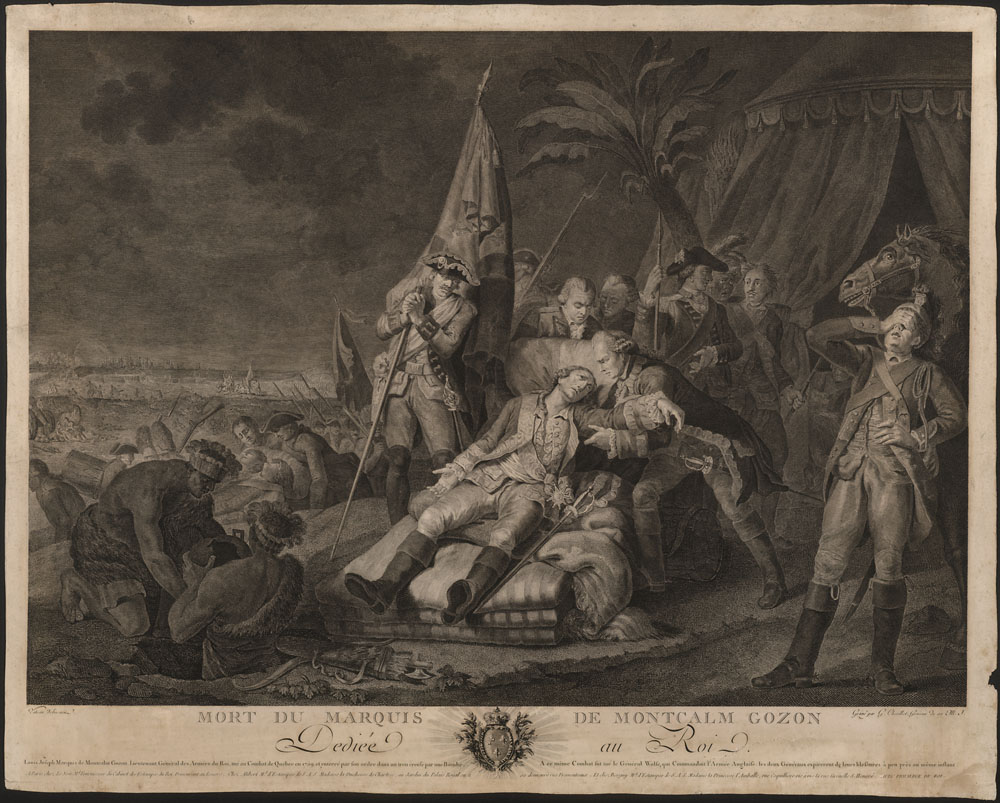 Louis-Joseph, Marquis de Montcalm, died of his wounds on 14 September 1759, the day after the Battle of the Plains of Abraham, at age 47. The day that he died, he was buried in a crater made by a British bomb that had exploded inside the church of the Ursuline Monastery in Quebec City.

In 2001, Montcalm’s remains were transferred to the cemetery of the Hôpital-Général de Québec in a ceremony led by Quebec premier Bernard Landry. Montcalm lies there still, in a mausoleum dedicated to him.

Several monuments now honour the memory of this man who gave his life for the defence of New France. One is a statue on the façade of Quebec’s parliament building, the National Assembly. Another statue of Montcalm stands at the entrance to the Plains of Abraham, on the Grande Allée Est near the Hôtel Le Concorde. Lastly, the Wolfe–Montcalm Monument in Governors’' Garden, beside the Château Frontenac, honours the memory of these two generals whose rivalry marked a major turning point in Canadian history. 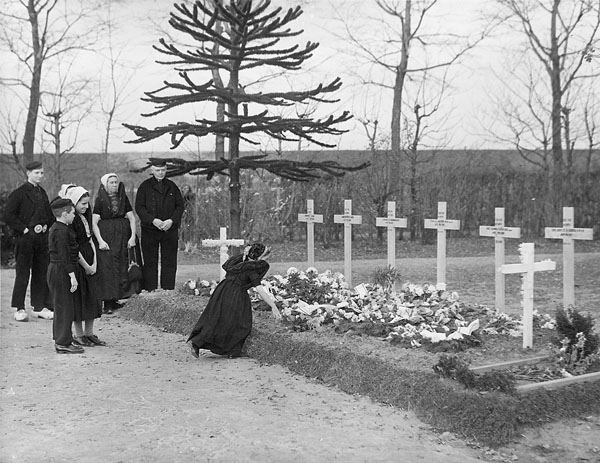