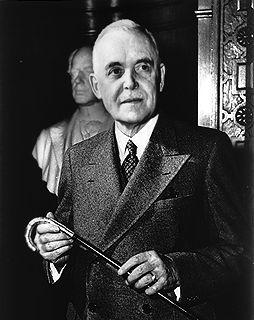 St-Laurent was a prime architect of Canada's international policies after WWII and promoted Canadian membership in NATO (courtesy Library and Archives Canada/C-8099/copyright Bill and Jean Newton). 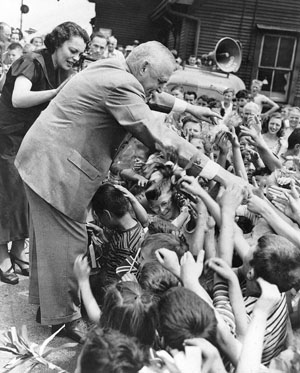 Born into a poor family, St-Laurent was fluently bilingual, became a prominent lawyer and, in 1914, a law professor at Laval. During the 1920s and 1930s he was a successful corporation lawyer and served as batonnier, or head, of the Québec Bar and president of the Canadian Bar Association (1930-32). In 1937-40 he was a counsel to the Rowell-Sirois Royal Commission on Dominion-Provincial Relations.

In December 1941 St-Laurent was approached by Liberal Prime Minister Mackenzie King to become minister of justice. He had no political experience but felt it was his duty to accept. In February 1942 he was elected to the House of Commons representing Québec East. Unlike other Liberal ministers from Québec, he had not pledged to oppose conscription in the Second World War, and supported King in 1944 when he imposed it for overseas service.

King was grateful and, impressed with St-Laurent's logical mind, made him secretary of state for external affairs in 1946. St-Laurent represented Canada at international conferences and at the United Nations. He promoted Canadian membership in NATO, believing that Canada must help resist communist expansion.

As King's chosen successor, a selection ratified by a Liberal convention, St-Laurent became prime minister on 15 Nov 1948. He headed a cabinet of exceptional competence, including Lester Pearson in external affairs, C.D. Howe in trade and commerce, Douglas Abbott in finance and Brooke Claxton in national defence.

Old-age pensions were extended; hospital insurance was enacted; equalization payments among the provinces were approved; and Newfoundland formally joined Canada. Abroad, Canada garrisoned troops in Europe under NATO and sent forces to fight for the UN in Korea.

The Korean War started on 25 June 1950 when the UN threw its support behind the South Korean army in a fight against North Korea. The UN Security Council was dominated by Western countries and boycotted by the Soviet Union — allowing the UN to formally enter the war (led by the United States) against the communist North, which was later supported by China. Canada sent nearly 30,000 troops to Korea, along with warships and other forces. More than 500 Canadians were killed and approximately 1,200 wounded.

The war ended in a stalemate with the Korean peninsula divided by a demilitarized zone that still forms the boundary between North and South. St-Laurent was prime minister for the war’s duration.

St-Laurent's reassuring, grandfatherly appearance and his government's record helped the Liberals get re-elected in 1949 and 1953 with overwhelming majorities. However, a successful round-the-world trip in 1954 seemed to tire St-Laurent; thereafter, observers noticed that he seemed removed from events around him.

During his last year in office the Liberals suffered reversals in public opinion, partly as a result of the Pipeline Debate in 1956. In June 1957 St-Laurent's government was defeated by John Diefenbaker’s Progressive Conservatives. In January 1958 he retired from public life and returned to his law practice in Québec.

St-Laurent was much admired for his decisiveness, patriotism and sharp mind, and was held in great personal affection by those who worked with him. In 1967, he was named a Companion of the Order of Canada “for his service to his country.”

Shortly after his death in 1973, the home of his birth became the Louis S. St-Laurent National Historic Site of Canada. The house, general store and other buildings in Quebec’s Eastern Townships celebrate his life. His accomplishments are further commemorated at Louis S. St-Laurent Heritage House in Quebec City.