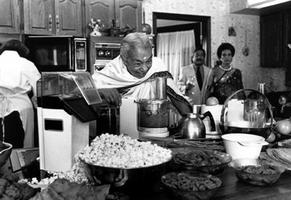 Set in Toronto, Masala is the story of Krishna, an angry, rebellious and mysterious young man whose parents have been killed in a plane crash. He shows up at an uncle's house for help, entering a world of rampant materialism, crazed passions, political intrigue and the clashing expectations of first and second generation Indian immigrants. His cousin Rita becomes an ally in this world of parental pressure and arranged marriages, even landing him a job as a travel agent. Meanwhile, his uncle Tikkoo holds out for more money from the government for a rare Canadian stamp he has found, and uncle Lallu's sari shop is under suspicion for funnelling funds back to India to support the Sikh rebellion. While all this swirls around him, and haunted by visions of his family's death, Krishna attempts to put his shattered life back together.

At once an uproarious satire on the new, multicultural Canada as well as an intelligent cinematic affirmation of it, Masala is a carnivalesque film combining elements of comedy, tragedy, social commentary, fantasy and the epic musicals of Indian cinema. Srinivas Krishna's bold approach, all the more impressive considering it is his first feature film, detonates conventional Canadian modes of cinematic realism; he prefers instead to illuminate his tale of life in a rapidly changing modern Canada with a startling hybrid of old and new storytelling styles. The result is not so much postmodern pastiche as a brilliant re-contextualizing of narrative forms within the familiar tale of an immigrant struggling to adjust to life in a new world. Not unlike the novels of Salman Rushdie or, in one sense, the works of Susanna Moodie, Masala offers a remarkable reordering of sensibilities and is a powerful tale about the delights and dangers of cultural intersection in the late 20th century.