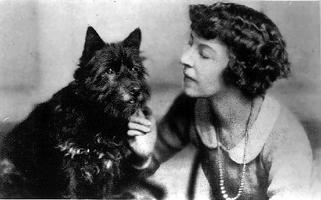 Novelist Mazo de la Roche, one of the greatest of 20th-century Canadian writers, is also one of the most underrated (courtesy Library and Archives Canada/C-5482).

Mazo de la Roche, writer (b at Newmarket, Ont 15 Jan 1879; d at Toronto 12 July 1961). Among the most prolific and widely read of Canadian authors, she wrote 23 novels, more than 50 short stories, 13 plays and many other works. Her Jalna novels have sold 9 million copies in 193 English- and 92 foreign-language editions. Mazo de la Roche began writing short stories before WWI and published 2 novels in the 1920s before winning international recognition with the publication of Jalna in 1927.

This story of an Ontario family named Whiteoak and its home Jalna won the Atlantic Monthly award for the best novel of that year. Sequels depicted other episodes in the history of the Whiteoaks. Young Renny (1935) was several months on the New York Herald bestseller list. A play based on the Jalna stories was a hit in London, New York and Toronto and inspired a Hollywood film. Her books continued to sell well after WWII (20 of her books were still in print in 1960), although her novels of the 1950s do not compare well with her earlier work. In 1972 the CBC produced a TV series based on the Jalna stories.

Although still a best-selling author, Mazo de la Roche was not taken seriously by critics after WWII. Her later works too closely resembled formula romances and succumbed to sentimentality. This later criticism has been unfairly extended to the full body of her work, including her earlier novels, which are distinguished by well-defined characters, good dialogue and subtle imagery. One of the greatest of 20th-century Canadian writers, she is also one of the most underrated.