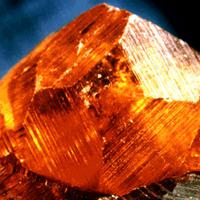 Metamorphic rock is one of the 3 major classes of rock comprising the Earth's crust, the others being SEDIMENTARY and IGNEOUS ROCKS. Metamorphic rock has been transformed, while in the solid state, by pressure, temperature and deformation. The original MINERAL content, textures or structures have been changed from those of the rock's sedimentary or igneous parent material to others that are characteristic of the pressure, temperature and strain of the metamorphic process.

The principal agents of metamorphism are temperature (T) and pressure (P). Where temperature is the main cause of recrystallization (ie, transformation), as is common adjacent to hot igneous intrusions (upwellings of molten rock beneath the Earth's surface), the rock is said to have undergone "thermal metamorphism." If pressure or mechanical forces such as shearing or crushing along a fault are the main cause, the resulting rock is termed cataclastic (broken into small particles) or mylonitic (milled); these rocks are characterized by a drastic reduction in grain size. Where both temperature and pressure are essential to the process, the rocks develop a whole suite of new minerals and textures (the geometric relationships between grains and crystals in the rock). These processes occur on a large scale in mountain belts that form at convergent PLATE TECTONIC boundaries. The resulting metamorphic rocks are sometimes called "dynamothermal" metamorphic rocks, or "regional" metamorphic rocks because of their widespread occurrence.

A wide range of metamorphic conditions occurs in nature, from less than 100° C to more than 1000° C, and from a few hundred bars to more than 150 000 bars of pressure. Within this wide P-T range, rocks recrystallize to new assemblages of minerals characteristic of the P-T range to which they have been subjected. Such a collection of rocks, having various origins and chemical compositions and containing minerals that have come to equilibrium in a restricted P-T range, are said to define a "metamorphic facies." Although these P-T conditions vary gradually, it is possible to recognize a limited number of facies based on the presence or absence of certain key minerals or groups of minerals. The boundaries between different metamorphic facies are in places where one key assemblage of minerals has reacted to form a new assemblage characteristic of the new facies. These reaction boundaries are called isograds, or lines of constant metamorphic grade. Rocks that do not have chemical compositions capable of forming the key minerals cannot be used to recognize a facies or a facies boundary.

Over the range of metamorphic grades, each type of original sedimentary or igneous rock, with its own specific chemical composition, produces characteristic mineral assemblages that allow geologists to infer metamorphic P-T conditions. These "diagnostic" minerals are different from minerals of unmetamorphosed rocks, and they are produced by chemical reactions that occur because the change of conditions makes the original low-temperature and low-pressure minerals unstable together.

Basaltic rock (an igneous rock) metamorphosed at low pressure recrystallizes in the zeolite facies at temperatures below about 225° C, followed by the prehnite-pumpellyite facies at slightly higher P-T. Above about 275° C, basaltic rocks crystallize in the greenschist facies, named after the green colour of its diagnostic minerals, chlorite, actinolite and epidote. Above about 450° C, amphibole dominates the mineralogy of amphibolite facies rocks, while at temperatures above about 750° C the appearance of orthopyroxene signals the onset of the granulite facies, so named for the coarse granular texture of these rocks.

Basaltic rocks that are metamorphosed at high pressure and relatively low temperature recrystallize in the blueschist facies (at low T), named after the spectacular blue amphibole glaucophane that forms, and in the eclogite facies (at higher T). Blueschists are found only in rocks formed during the last 120 million years, and therefore are restricted in Canada to the Cordillera. Eclogites are also generally restricted to relatively young rocks, with the world's only occurrence of Archean (more than 2.5 billion years old) eclogites being discovered recently in the Canadian Shield in northern Saskatchewan. "Ultra-high pressure" is a new facies of metamorphic rocks only recently recognized to form at extreme depths (greater than 150 000 bars) in subduction zones. The diagnostic minerals of this facies are high-pressure polymorphs of common minerals. Coesite forms instead of quartz at pressures greater than about 17 kilobars. Of special interest is the occurrence of microscopic diamonds, instead of graphite, at pressures in excess of 30 kilobars.

Sedimentary mudstones or pelites [Gk "clay"] are rocks rich in clay minerals and feldspar; they are very important because the metamorphic minerals that form allow geologists to deduce P-T conditions precisely. In the greenschist facies, one of the first minerals to appear is chlorite, followed by biotite or chloritoid, and then garnet. At low pressure, the amphibolite facies is marked by the occurrence of andalusite, cordierite and then sillimanite. At higher pressure, staurolite and kyanite appear instead of andalusite and cordierite. Pelites metamorphosed under upper amphibolite facies conditions contain potassium feldspar and sillimanite; in addition, they have segregations of quartz and feldspar that show evidence of crystallized granitic melt that formed upon partial melting of the pelite. At higher temperature, orthopyroxene appears in the granulite facies, while the series of spinel, quartz and sapphirine, and quartz indicate even higher temperatures. The latter conditions are only rarely achieved in the Earth's crust, although several occurrences of these ultrahigh-temperature assemblages are found within granulite terrains of the Canadian Precambrian Shield.

Impure limestones and dolomites recrystallize into beautiful marbles peppered with various silicate minerals. These minerals can indicate the P-T regime of formation as well as the composition of metamorphic fluids (largely mixtures of water, carbon dioxide and methane). In a typical sequence of increasing temperature, talc first appears, followed by tremolite, diopside, forsterite and wollastonite. Important economic deposits occur in skarns (Swedish for "waste rock" of coarse marble and garnet) that form around igneous intrusives, where hot fluids infiltrate limestone country rock.

The development of mineral thermometers and barometers (T-sensitive and P-sensitive equilibria respectively) allows more accurate estimates of metamorphic P-T conditions than are provided by observed mineral assemblages. A large number of such equilibria have been directly calibrated in laboratory experiments that attain the P-T conditions of natural metamorphic processes. Others can be calculated with increasingly accurate thermodynamic data for minerals. The combination of these quantitative calculations with careful petrographic or textural observations allows geologists to determine the sequence of P-T conditions experienced by a metamorphic rock over time. When the maximum pressure was reached prior to the maximum temperature, metamorphism was caused by crustal thickening processes. Metamorphic rocks that reached their maximum temperature prior to their maximum pressure were found in high heat-flow environments, commonly with a large contribution of heat from igneous intrusions.

The names given to metamorphic rocks commonly account not only for the mineral content and metamorphic grade or facies, but also for the texture of the rock. Rocks that form through thermal or contact metamorphism are referred to as hornfels [Ger "horn rock"] because of their very fine-grained, hornlike texture. This kind of rock is found in many places in Canada (eg, near the Amulet-Dufault ore body near Noranda, Qué) and in the contact metamorphic rocks of BC's coastal ranges. Gneiss [Ger "spark," for its sparkling appearance] is a coarse-grained rock with distinct layers made up of different proportions of minerals. Many gneissic rocks are also foliated (ie, show alignment of leaves or layers of flat or tabular minerals - eg, mica), or of elongate minerals (eg, hornblende).

Schist [Gk "divided"], a strongly foliated rock, is named for the ease with which it can be split into thinner sheets; mica and chlorite impart the foliation to schist. Phyllite [Gk "leaf"] is a very fine-grained, foliated rock in which the alignment of plates of minerals can be recognized, although individual grains are difficult to discern without a microscope. Slate [Fr "splinter"] is a rock ordinarily derived from mudstone (shale formed by consolidation of mud) that has a well-defined cleavage cutting across the original sedimentary layers. The textural names above may be applied to metamorphic rock of any composition and primary origin. Because any rock may become metamorphosed, various adjectival modifiers can be applied to the names of metamorphic rocks. Migmatite [Gk "mix"] is a metamorphic rock that has a mixed appearance because part of the material has melted during heating. Migmatitic gneisses are common in rocks of the Canadian Shield, which have experienced many episodes of metamorphism at very high pressures and temperatures.

Polymetamorphic rocks have been subjected to several episodes of metamorphism. Such rocks generally reveal their complex histories through their textures. Minerals of later episodes can be found growing on top of older minerals, and a foliation that originated in an earlier metamorphic period can be seen included in porphyroblasts produced in a later episode. A porphyroblast is a mineral grain that grew in the solid state during metamorphism, enveloping and enclosing mineral grains that had formed previously.