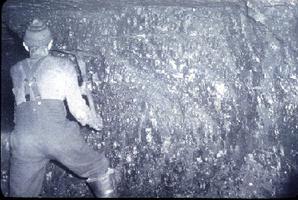 MINING supports, directly and indirectly, about 5% of all Canadian employment. Because of the prevalence of mined materials in our lives, every job created in the mining industry creates at least one other job in the Canadian economy.

Mechanization and new mining methods have diminished the mining work force since the mid-1970s. Additionally, depleted resources have forced the closure or suspension of some mines. New mines have opened but the number of openings has not kept pace with closures.

In Canada mining pays high average wages compared to other major industries; straight wage, bonus, salary and contract schemes are in effect at various mines. Most operations are unionized. The higher costs of living in remote mining communities are often offset by subsidies or other benefits. Some northern mines engage alternating crews of employees to work intensively for periods at the mine site and then take equal periods of leave in their southern homes, thus avoiding the need to establish family accommodation at the northern locations.

Mining was once a labour-intensive industry. Improvements in equipment and the mechanization of many tasks have reduced the number of workers required. Wages have increased rapidly in recent decades, and the need to mine larger tonnages of lower-grade ores and to increase productivity has become more urgent. Consequently the industry has become capital intensive, and, in many mines, investment in equipment now exceeds $100 000 per miner. Concurrently the proportion of conventional miners has diminished, while that of mechanics, electricians, technicians, etc, has increased.

Mining tends to occur in parts of the country where other economic activities are not as well-developed. Mining has become an important part of the traditions of many of the more than 115 Canadian communities that depend on it, and a mine closure can have a profound impact. For example, in January 1999, the Cape Breton Development Corporation (Devco) announced the impending closure of the Prince Mine and the planned sale of the Phelan Mine. The population in the area was approximately 9000. When the Devco mines began operation in 1967, the work force numbered 6300. By 1995 that number had fallen to 2200, and early in 1999 Devco employed 1667 miners. The colliery had been subsidized by the federal government for over 30 years, to the sum of $1.6 billion, but had long ceased to be commercially viable.

Certification of coal mine workers and supervisors is usually required, with minimum standards set by federal or provincial governments. This is to ensure that miners and officials are aware of hazards and will follow approved procedures where explosive gas and coal dust may be present. Government certification in other mining industries is not usually required, but employers generally provide training programs. These programs range from simply assigning new employees to work with more experienced workers, to formal courses, sometimes with union and government participation. A recent development in some areas is the awarding of certificates of competence to miners who have achieved certain standards of experience and skill. Many companies also provide apprentice training programs for tradespeople (eg, mechanics, electricians).