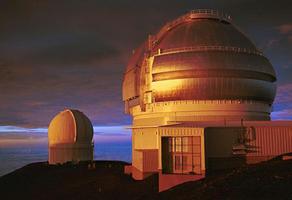 The site, at an altitude of 4200 m (and above 40% of Earth's atmosphere), is regarded as the best in the Northern Hemisphere (photograph by Jean-Charles Cuillandre).

Atoms had been detected in the interstellar medium by 1921 and, between 1936 and 1942, C.S. BEALS, then at the Dominion Astrophysical Observatory (DAO), Victoria, and Adams and Dunham in the US, detected optical transitions of the molecules CH, CN and CHpl in interstellar space. Andrew MCKELLAR (DAO) found that the CN molecule showed evidence of an excitation of This temperature was not understood at the time but is now known to result from microwave cosmic background radiation.

In 1963 the first detection of a molecule (the hydroxyl radical OH) at centimetre-wavelength radio frequencies was made by Weinreb, Barrett, Meeks and Henry of the Massachusetts Institute of Technology. The detection at millimetre wavelengths of the more complicated molecule ammonia (NH3), by Townes, Welch and their collaborators at Berkeley in 1968 led to a flurry of further discoveries. Using earth-satellite Copernicus, Lyman Spitzer, Jr, and his coworkers at Princeton detected molecules in the ultraviolet.

Spectra from interstellar molecules give a wide variety of information about the interstellar medium and have shown that a significant fraction of the medium is clumped into molecular clouds, ranging from less than 100 times the mass of the SUN to a million solar masses. Within these clouds the visible stars in the GALAXY are formed. Molecular radiation provides information about the temperature, density and velocities within the clouds, and the clouds themselves are being used to map the structure of our galaxy. Improvements in the sensitivity and angular resolving power of telescopes have allowed detection of radiation from molecular clouds in several nearby galaxies. When larger millimetre-wave telescopes, now being constructed, are operational, research opportunities will be even greater.

Radiation detected from interstellar molecules usually arises from changes in a molecule's state of rotation. Substitution of an isotopic species of one of the atoms in the molecule (which produces a significant change in the rotation speed) is therefore easy to detect. This technique allows measurement of isotope ratios of several common atoms (eg, hydrogen, carbon, oxygen, nitrogen, sulphur) in a number of clouds throughout the galaxy; these studies have indicated that, apart from anomalies in the region of the galactic centre, the isotopic composition of the rest of the galaxy (including our solar system) appears to be fairly uniform.

Canadians have made significant contributions to the search for new interstellar molecules. In the early 1970s the molecules HCN and HC3N were detected, the latter by UBC graduate Barry Turner, working at the National Radio Astronomy Observatory in Virginia. This sequence was greatly extended by a group of Canadian radio astronomers from the Herzberg Institute of Astrophysics (named for Gerhard HERZBERG, 1971 recipient of the Nobel Prize in chemistry for his study of the spectra of molecules).