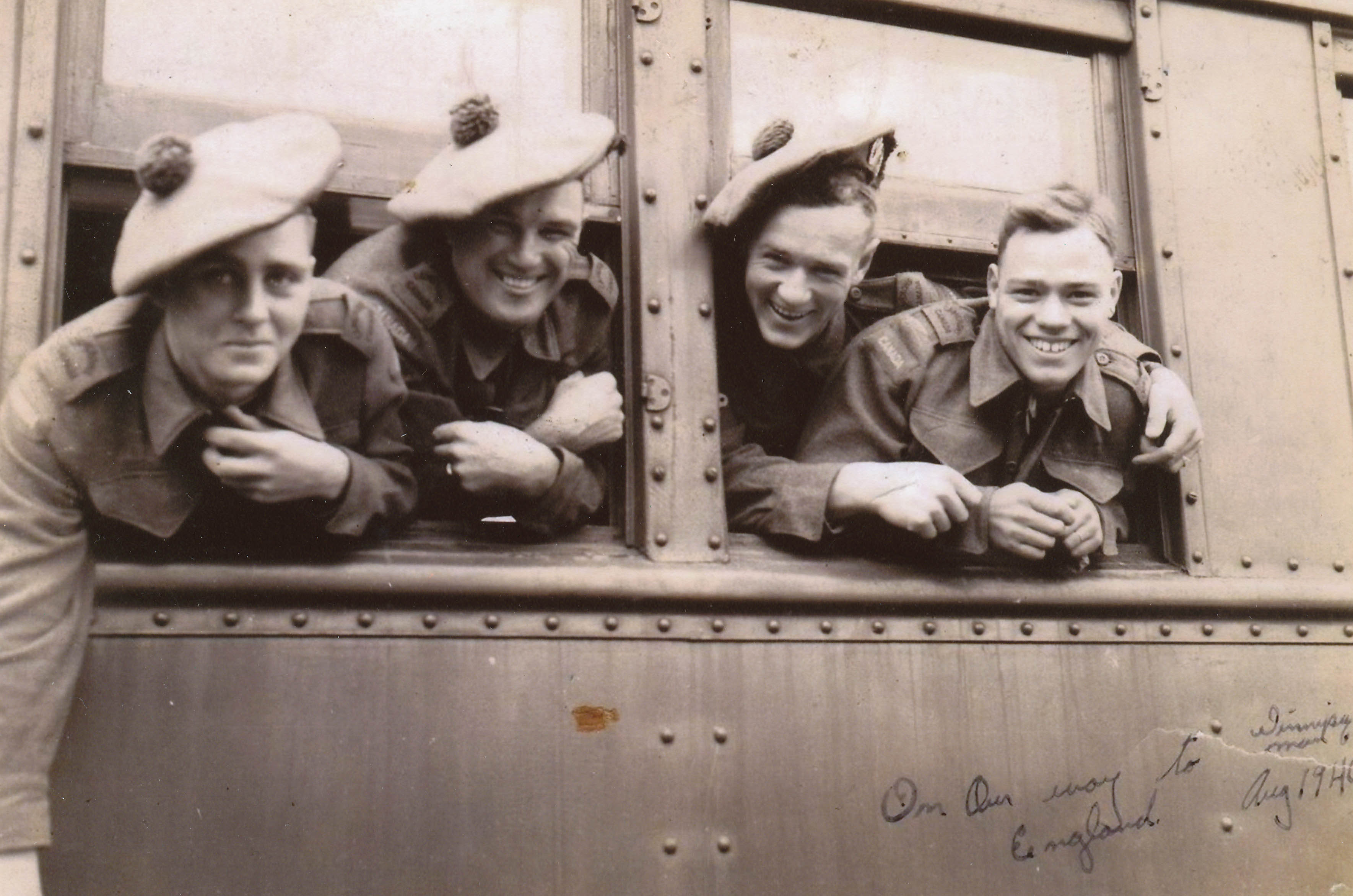 Donald Wolfe, seen on the far right, heading to Halifax to catch a ship to England.
(Courtesy of The Memory Project/Donald Wolfe)

"They [the Germans] were waiting for us on the breakwater up in Dieppe, France. So as soon as we got off the landing craft, boy, it was murder."

My first battle from there, we went to England in 1940. Then my first battle was the 18th[19] of August, 1942, which was the Dieppe raid [on the Normandy coast, France]. And to me, they won’t admit it, but to me, it was suicidal. Now, it was my battalion[’s turn to attack], there were 600 of us that went in there in a nine hour battle and we left 400 on the beach dead and wounded. So that’s how it worked out. But anyways, I wound up back. How I got back, you’ll never know. Because what happened was this. I tried to swim with my army boots and my gaiters [garments worn over the shoe and lower pant leg] and I couldn’t kick to stay afloat. So what I did, I had to go up and down in about eight feet of water, because they [the Germans] had machine gunfire on the water. So what I did then, I went up and down until I got my shoes off. Once I got my shoes and my gaiters off, then I swam out in the Channel and they picked me up with a landing craft. So this is how I survived the Dieppe raid. But it was, actually, it was as far as I was concerned, it was suicidal. It was, oh, it was, you should have seen it. They [the Germans] were waiting for us on the breakwater up in Dieppe, France. So as soon as we got off the landing craft, boy, it was murder. Like I said, when we land at Dieppe, there was a town on the right hand side of Dieppe they called Pourville. Now, Pourville, that’s where we landed. So my battalion or my brigade, the [Sixth Canadian Infantry] Brigade and Second [Canadian Infantry] [ Div[ision], we went in the farthest than anybody. Because they didn’t have, because we weren’t, we were, oh, maybe two miles or more from Dieppe itself. So what happened then, when we got in, then we turned around and we come back to the front again, and then we went up the coast to Dieppe. And boy, was it awful. You have never seen so many people dead in your life, dead and wounded in your life. Because I drank so much saltwater that they automatically put me in the hospital. And I was in there for, oh, a good week. Then after I got rid of all the salt, then what I did, I went back to my battalion again. We landed in the same spot [at Graye-sur-Mer, Normandy, July 7, 1944] as we did in the Dieppe raid. Out of the whole works, when we got to Dieppe the second time, there was only 35 originals left. I was a [non-commissioned] officer, I was a corporal. And my job was demolition. In other words, if there’s any roadblocks or anything and a tank would come down the road, and any roadblocks, they would shut the motor off because 90 percent of all the roadblocks are booby-trapped. So then they call us in and with my Jeep and my guys, we would blow up the roadblock. And then we’d work away into the German lines for another 200 or 300 feet to make sure there was no more soft spots in the road that could be bombs. And the only way that we could clean a roadblock out was by using explosive. That was amatol. And on both ends of the roadblocks, the Germans had [what] they called S-mines [an anti-personnel mine designed to be used in open fields]. Now, these mines, if you blew a roadblock and some of the stones and stuff hit a mine, it would be that things would fly up in the air about eight or ten feet and explode. Now, and anybody that was in that area, you’re lucky if you survived, you were very lucky. All our wounded and dead, enemy, they booby-trapped them with shoe mines [a small German wood box fragmentation mine] and around the neck. So that if anybody picked up a dead person to put him on a stretcher or something, they were blown up themselves. I had a system. What I did with my platoon, I had a piece of wood about, oh, 50 feet long. And I had a piece of rope on the end and I put the rope around the dead man’s wrist and I pulled him sideways. And as soon as I pulled sideways and if they booby-trapped him with the shoe mines, it would blow his head off but at least I didn’t get killed myself. And we were very very lucky that we had lots of blankets, so if a person lost parts of his body, we just covered him up. So it worked out quite well. When you start to relive the war, it’s not good. Now, what I went through as a front line soldier, you have no idea in the world. They told me that, like the doctors and them, they told me, if they keep talking about the war, and that will cure my head. And you know something? It did. I just feel like 100 percent now. Because see, I was reliving everything that I went through. Oh God, must have been, oh geez, I’d say almost a year. Yeah, oh God, it was, I couldn’t sleep. Like I’d wake up 3:00 in the morning and I could relive everything. And it was awful. But then this here lady psychiatrist, she told me: ‘Do you talk about it?’ I says: ‘No.’ She says: ‘You start right now.’ So I started talking about and you know, and three or four months, I was a different person.