"I was watching the Typhoons, or the ‘Tiffies,’ blowing up a forest and I was thinking, give them hell, boys."

"I was watching the Typhoons, or the ‘Tiffies,’ blowing up a forest and I was thinking, give them hell, boys." See below for Mr. MacDonald's entire testimony. Please be advised that Memory Project primary sources may deal with personal testimony that reflect the speaker’s recollections and interpretations of events. Individual testimony does not necessarily reflect the views of the Memory Project and Historica Canada. 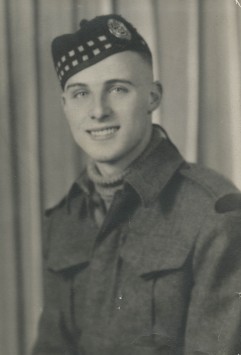 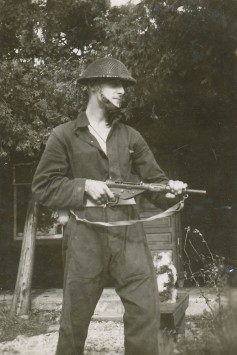 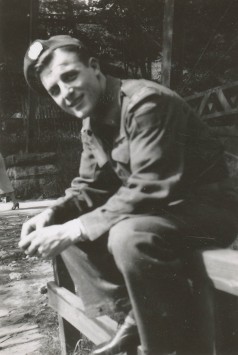 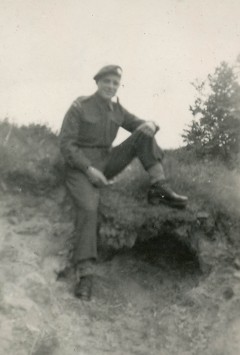 I was in the Lake Superior Regiment at the Küsten Canal in Germany. I was in “D” Company, which was on the north side of the canal. “A” Company was on the south side. We had our tanks and trucks and personnel carriers in a line on a good paved road. Our job was to prevent elements of the German Army reaching further down the road toward the Hochwald Forest where there was a battle going on. I was watching the [Hawker] Typhoons, or the ‘Tiffies,’ blowing up a forest and I was thinking, give them hell, boys. Suddenly they came back and strafed our column and let two rockets go, which landed in the canal.

I had a ditch and an embankment to help me dodge around the strafing. They flew over one way, I dodged around the corner. When they flew along the ditch the other way, I dodged around the corner going the other way. While this was going on around me, the German soldier was in a foxhole with a bazooka, a machine gun. His job was to knock out a tank and block the road. We had thrown two hand grenades, which he slapped down with his hands.

A tank from the British Columbia Regiment [(Duke of Connaught’s Own)] rolled across the bridge and the German hit the tank in the rear. The tanker crawled out of the tank to see what damage was done and the German fired and hit him in the corner of his eye. The bullet exited out the top of his head. He did survive, but he had epilepsy the rest of his life. The German thought his work was done, so he slowly raised his head out of the foxhole and “A” Company hit him between the eyes with a 50 calibre Browning. We did not continue on that road because we were called back into Holland to assist [Canadian] 2nd Division near Appeldoorn.

In approximately 1944, we were walking down the main street of Werl, Germany, when Germans started firing airburst shells over our heads. I saw an open door at a house and ducked in for safety. There was a bed right at the door, so I slid under for protection. I looked up and saw there was no mattress on the bed and no roof on the house. I had to laugh at myself.

In Germany, I was looking at a large farmhouse with many additions, each getting smaller towards where I was standing. My thought was to get eggs out of whichever addition was the henhouse. The roof of the last addition was just one foot over my head and as I stood there wondering which addition was in fact the henhouse, an armour piercing shell hit the tile roof and it went end over end for miles, sounding like a Harley Davidson motorcycle. If that shell had been high explosive instead of armour piercing, I would not be here to be telling these stories.