"[She] said, that was the only thing she was convinced, that was the only thing that saved my life, was this supposedly over-prescribing of the penicillin." See below for Mr. McAndrew's entire testimony. Please be advised that Memory Project primary sources may deal with personal testimony that reflect the speaker’s recollections and interpretations of events. Individual testimony does not necessarily reflect the views of the Memory Project and Historica Canada. 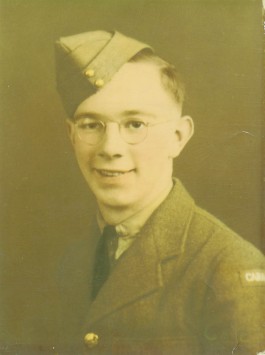 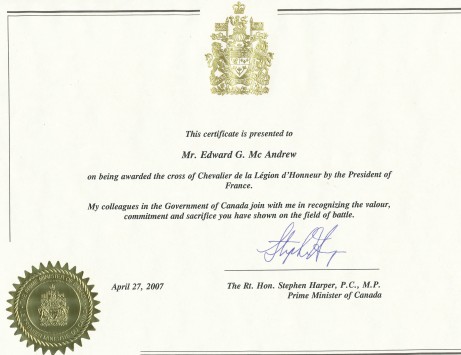 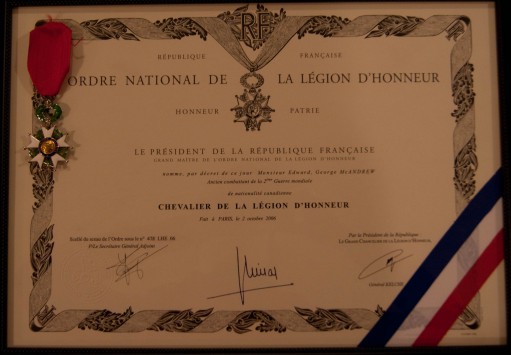 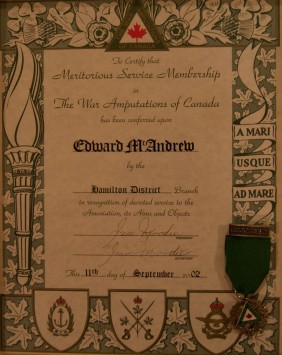 When I was wounded, I’d been out, they had stopped oral communications on the phone or on the radio because of security. And so that particular day, we were runners, signallers became runners. So I was out delivering some messages firsthand to some of the forward companies, all of a sudden I’m walking along, I take some cover and I’m walking along and a bullet just misses my nose, in a hedge. Might have been a foot away, I don’t know. And so down I go. And I get up and I started running and bang, and he gets me in the leg. But it just felt like somebody kicked you. I didn’t even know what it was at first. So I get in and you couldn’t tell. The bullet had gone right through and seared, so there was no blood loss or anything else. And again, I delivered one of my return messages and the doc looks at my leg and oh, it’s okay, you could hardly see where it was gone through it, it went through the [lower leg]. You could hardly see the imprints of the exit of the bullet. So he finally found it and he says, oh, it’ll be alright, he says, make sure that you come in here every day so we can make sure there’s no infection and keep it clean. And we’ve got to keep the, we’ve got to let the thing heal from the inside out. All of a sudden, a German bomb lands in the courtyard, I’m in the courtyard right there in headquarters. It was a mortar bomb. And I was about two-and-a-half feet from the mortar bomb when she went off. The doctor put a splint on the leg and they put me on the jeep ambulance to send me back. And they were sending me back and we get about halfway back to the bayou where the Casualty Clearing Station was and they start shelling the highway. It was a supply route to the forward companies. We hadn’t gone 100 yards and we got a direct hit, almost direct hit on the jeep ambulance. The whole jeep ended up in the ditch. And I was okay, two guys were killed, doctor starts to operate and I found this out from the priest who was called in, they said I’d died. And so he didn’t finish the operation. He got everything all finished except he didn’t get any closure on the stump. He had to amputate the leg and he didn’t get any closure. And so he went away. Well, we were just in ordinary tents and ordinary tables were the operating tables. And he said, he called the padre over and the padre said, okay, so he said, give him the last rights, so he gave me the last rights and he had started this and he put a mirror over my mouth. The mirror was moist. Huh. He’s alive. So went back to the doctor and he tried to, told the doctor, he’s okay, I save one guy, I lose four others. It’s just a case of numbers. So the padre wouldn’t give in. And he kept bugging him. He said, okay, to satisfy you, I’ll come back. Well by this time, the stump has swelled huge. And so he couldn’t really get closure. He got stitches on there but not really closure. And he says, that’s it and he put me on the stretcher and put me in the ground in a little tent. And he said that’s where I’ll stay. And they made a cross and they put it outside that tent and I laid there for three days in a coma. Okay, I came to and they shipped me out. And on the way back on the ship, you’d have a shipping tag, just an ordinary shipping tag for all your records, medicines and all that. And on the hospital, on the barge, we sailed back to England on a barge and the sick bay attendant misread the medication. And it said 5,000 units of penicillin. And he goofed up and he read 50,000. And he gave me a 50,000 unit of penicillin. And I took it every two hours for ten hours. So they send me up to Bally’s Park War Hospital in Woking and it was where Lady Fleming was a surgeon, was Chief of Surgery. And she was working up there. So they put me on a train, all by myself, with a doctor and nurse and orderly and on the train, I went to Woking and I got there, I don’t know, about 8:00 in the morning and 10:00, I was on the operating table and she was operating on me and she said, that was the only thing she was convinced, that was the only thing that saved my life, was this supposedly over-prescribing of the penicillin. And it was right after that that she changed the regulations and she was the wife of Alexander Fleming. So she changed the regulations, 50,000 units became the standard dose.