Elizabeth “Betty” Dimock’s great ambition during the Second World War was to become a nurse. She registered in the South African army to treat wounded soldiers from the North African Campaign. Read and listen to Dimock’s story below.

Elizabeth “Betty” Dimock’s great ambition during the Second World War was to become a nurse. She registered in the South African army to treat wounded soldiers from the North African Campaign. Read and listen to Dimock’s story below. Please be advised that Memory Project primary sources may deal with personal testimony that reflect the speaker’s recollections and interpretations of events. Individual testimony does not necessarily reflect the views of the Memory Project and Historica Canada. 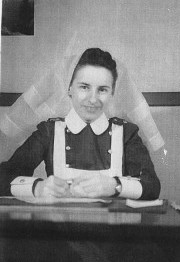 "It was very hard to leave these boys because they were really wonderful boys and accepting of the circumstances so easily, so well."

Well, I was born in Saint John, New Brunswick in 1916. Of course, that was during the First World War. So my mother and I, my mother… I’m an identical twin and so my mother and my sister and me were staying with our grandparents, with my mother’s parents, during the war because my dad was overseas. He saw me when I was two weeks old and not again until I was four years old.

This was my great ambition, to be a nurse in the next war. There was a lot of talk about war at that time, so that was my ambition. And I had, I finished, I was only 17 and I had to be 19 to go into training. So I went down to New York and did two years with fine arts. And then came back to Canada and I trained in St. Stephen, New Brunswick, at the Chipman Memorial Hospital. 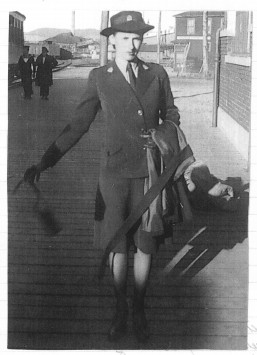 Patients were from the North Africa campaign. You see, Rommel, German general, was going through North Africa, very fast, so they couldn’t establish hospitals in North Africa. That’s why there was a great call for hospitals to be established in South Africa, because that was the first commonwealth country or the nearest commonwealth country to the fighting in Africa. Rommel was a very fair man, he saw that they had treatment but they were usually, if they had lost a limb or were badly injured, they were just wrapped in plaster cast and shipped to us. So they were in very, very poor shape when they got to us.

Some of them never made the trip of course. We had no antibiotics, it was before the days of antibiotics. Maggots did the work instead. And we had very few dressings. We had to wash out the dirty old, soiled, infected dressings and hang them on the line in the sun and used them the next night, that night. Native boys fanned flies off the wounds in the daytime, to try to prevent the maggots. And we had of course unfamiliar medication and treatment. It was quite a new experience.

One unforgettable case, a young English lad from the North African campaign with numerous injuries, in complete body cast, with maggots crawling out from under the cast in various locations. Removal of the cast exposed unexpectedly severe shoulder injuries. The area was filled with foul-smelling purulent substance, crawling with maggots. Apparently, he had had no care since leaving Egypt, being treated, wrapped in plaster, three weeks prior to arriving at our place.

This patient begged me to get someone other than myself to form the, to perform the procedure. Only because he was aware of what I would find and he knew that I was not aware of it. And I had no recollection that things would be like that. I needed a soup ladle to remove the pus and maggots before I’d lost many meals. I had, it was bad, it was… And that, for a young nurse, was a little bit rough.

I wanted to get in to the Canadian army so I didn’t sign the contract, the second contract we got for the duration. It seemed to be a long way off at that time and I wanted to get into the Canadian army so I thought, this is time for me to go home. It was very hard to leave these boys because they were really wonderful boys and accepting of the circumstances so easily, so well.

So I arrived home, I think it was August of 1943. And then I immediately went in the Canadian army. And then I went to England in the early spring of 1944. I wasn’t in Canada very long. I went to England and I was with a whole hospital unit, No. 23. And I stayed with them until I left just before V-E day, to go to, as reinforcement to No. 1 Canadian general hospital in Nijmegen, Holland.

When we first went to England was the first time we’d been associated with antibiotics, which was penicillin. And that was given every four hours, at least. Sometimes more frequently. And a big amount, it wasn’t too well purified and of course, keeping needles going, keeping them sharp and everything, we had to do that. And so some of the needles were not too sharp when we had to shoot them into the boys. They just screamed, it was terrible. We didn’t like doing it, we had to do it. And they’d hide. That was a hard, hard treatment really for them, getting these shots of penicillin. And it was hard for us to do but it’s the first experience we had with the results of antibiotics.

By the end of World War II, 4480 nursing sisters had served.

When I got back, I think the rations were still on somewhat and it was a different life. Everybody had changed, civilians as well as military people. Because I mean, it was a war that put the women back to work. Prior to that, a married woman couldn’t get any employment. And during the war of course, they had to fill jobs that men left, to go to war. So that’s when family life changed completely. Mother wasn’t home when the children came home from school because she was working and things. And that made a big difference. I mean, I grew up in a family where mother was always home. When we went in, the first thing we’d say was “mom, where are you”? And she always answered. Well, the children today don’t experience that and that of course came from the war, when women had to go back to work. 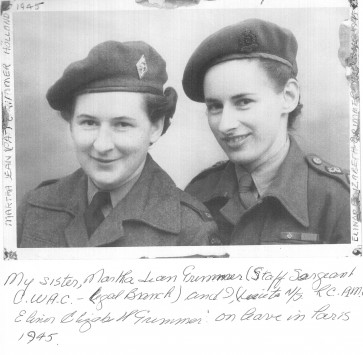 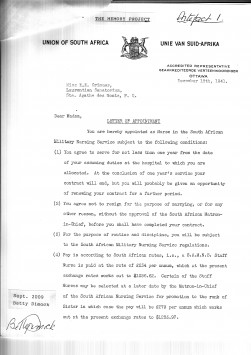 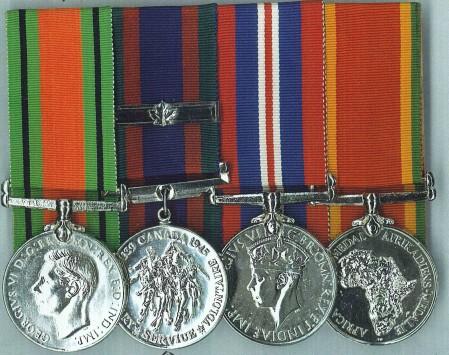