"I picked up a young lad, he was in uniform, a German. And I bet you he was only about 16 years old. He was very scared and it turns out he saw me and put his hand up and dropped his rifle."

"I picked up a young lad, he was in uniform, a German. And I bet you he was only about 16 years old. He was very scared and it turns out he saw me and put his hand up and dropped his rifle." 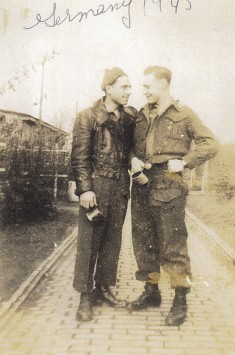 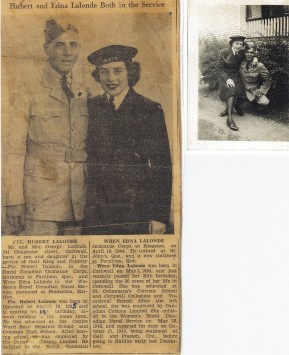 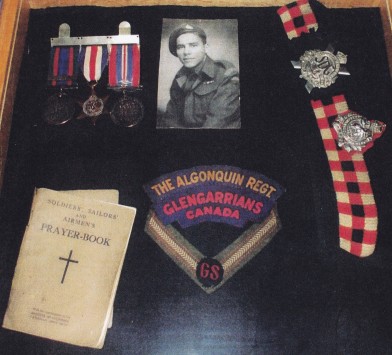 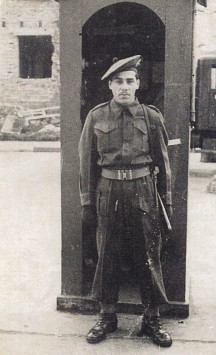 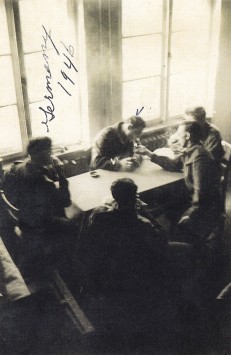 My name is Hubert A. Lalonde. I was born in Cornwall, Ontario. My age is 84. In England, I was there for November until about the middle of January. We went across and we got into trucks, big transport, and they dropped so many guys off at one place and so many guys off another place and they just dropped a friend of me and myself at this air base. That’s how I got into the Algonquin. And the guy was, had a Bren gun and didn’t want to carry no more and the sergeant said, you’re the Bren gun carrier. So I had that until the end of the war.

We had a rest one night and we were scared to lay down where we were, but we were told, everything’s alright, the tanks were around. We lay down on the ground, had a snooze, when we woke up, we were covered with snow. That’s the first time I see snow over there. The guy drove the truck there with our supplies in, he started a fire with gasoline and he carried it in the truck. We hopped over to the fire to get warmed up, put our boots on. That’s the only time I saw snow. We had rain, a bit at the time. You try to run with uniforms wet, soaking wet, it’s hard. It’s heavier than carrying a packsack and a rifle.

I picked up a young lad, he was in uniform, a German. And I bet you he was only about 16 years old. He was very scared and it turns out he saw me and put his hand up and dropped his rifle. Didn’t want to fight, you know. Well, I nearly shot him but he was in a trench there and I asked him in German, put your hands up, you know. He leapt to come out because he didn’t want to fight no more. I think he was just scared more than anything else. But he scared me when I saw them big eyes and his head sticking up with the whole of it. Scared me more than anything else to see it.

When the war ended, we were in Woerden. We were in there, all hanging around our tanks and listening to the radio broadcast. That’s when they come out with the war ended. We all were yelling whoopee and then I don’t know who got the whiskey out but somebody got some whiskey out anyways and we had a drink. We stood there until the next day, until we get orders were to go afterwards. I didn’t like to talk about the war then when I go home.

One of my chums there, he was a nice lad, he just stuck his head around the corner for a peek and he got a bullet through the head and that was, see that, you know, it happened. Another guy, now I can talk about it but another guy, he was, a machine gun went off and caught him in the right side there. They put him on a stretcher and they take him back to the hospital.

I’ll tell you one thing. We had our supper on Sunday, then we laid down on the floor and rest. Twelve o’clock, we were down the road, and there’s lines of boats. We went across this canal. I was the first one to get in because I had the machine gun and I got out on the other side. That’s the week I remember the most when, because we got across there on Sunday night, we didn’t get nothing to eat until Thursday. We were pinned down on the other side there and every time they get the bridge built up pretty well and get the tanks and trucks across, the Germans would blow it up. So it took us four days before they got food across to us.

And I had no mess tin because I had a bullet hole through my mess tin. So I picked up a can, some kind of vegetables or something they pour into a big pot and I picked the can up, the cook, he poured hot water in there a couple times and rinsed them out and I said, fill ‘er up. That’s how I ate my food that night, out of a tin can, because they couldn’t get me a mess tin.

That was a scary time too. In Almelo, I think that’s how you pronounce it. We were supposed to sleep downstairs on the floor and the sergeant went in and he talked Dutch and we had Dutch, French and English. And they said, no, we didn’t want to take to a bed in the head. I’m not sure whether it was his mother, had a bed downstairs and they couldn’t move her. But they give us their bed, my friend and I, and we didn’t want it. Every morning, we went up to the corner, the empty store up there and they brought us our food. And I used to hang around and I used to pick up bread and jam, big cans there and bring it down to the house and put it on the table. And you should see them two boys, they had raspberry jam and strawberry jam on their bread, you know. And the parents would let them eat first and then they would sit down afterward and have some toast, you know.

It was hard on us. I know I found it hard to see the people how they lived, no food and they’d been… It was in the town square, they brought this mother and her two daughters, they were blonde, an awful sight to see. They took them out and they put a chair there. And the father, they brought him out and he had to cut all their hairs off. They had beautiful blond hair. They collaborate with the Germans, when the Germans were in there. This is their punishment, they give them, these people. I didn’t think it was right but that’s their law and we weren’t supposed to interfere with that.